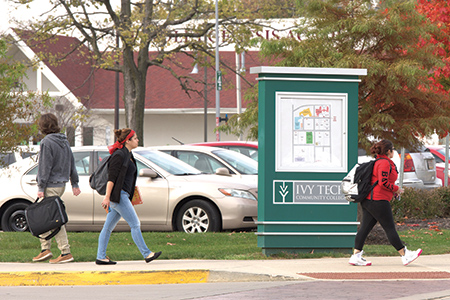 Two years ago, lawmakers rebuffed the college’s capital construction plans over questions about its future direction and frustration with its students’ academic performance.

But now, the very fiscal leader primarily responsible for that construction ban has softened considerably—not because he’s seen big progress from the school but because he’s so confident in the politically connected Ellspermann, who left her post as lieutenant governor in March to apply for the job at Ivy Tech.

“I’m very enthused about Dr. Ellspermann and the performance she’s put in so far and I’m looking forward to working with her in this next session,” said Senate Appropriations Chairman Luke Kenley, R-Noblesville. “I’m sure we’ll be able to work together to help move Ivy Tech forward.”

Ellspermann, he said, will have “quite an advantage” when it comes to working with the Legislature on the budget this year.

The college will be asking for about $130 million in capital expenses to fund five priority projects at its campuses throughout the state. Among the asks are a $40 million request to help rebuild Ivy Tech’s Kokomo campus and add a building after a tornado struck there in August; $38.7 million to renovate the Muncie campus to provide space for technology programs; and $17.7 million to update and expand the Columbus campus.

Ellspermann, an industrial engineer, said her priority in determining the facility needs of the school was “transparency in everything we do” and said the Ivy Tech team deployed a data-driven approach to determining which projects should receive state investment.

“We are extremely committed that we will not ask for new buildings for the sake of new buildings,” Ellspermann said. “It will be facilities that are of quality to provide the student experience that is warranted for the education they need, the credential or the degree they need, and the equipment to make that happen.”

She said she realizes the capital projects list is “a big ask to the General Assembly, but we also want to gently remind them that, two years ago, that number was zero.”

“It’s not surprising we would have a longer list this time,” Ellspermann said. “But I know not everything ever gets funded in a budget. You can’t take it personally; you just put your best foot forward.”

The state’s higher education commissioner, Teresa Lubbers, said she “thinks the prognosis is good that [Ivy Tech] would have at least one capital project funded during this session.”

State Rep. Tim Brown, another key budget-writer and a Republican from Crawfordsville, said the tornado damage in Kokomo “raises the attention and urgency and need of that particular campus” since it “destroyed opportunity for nursing graduates.” 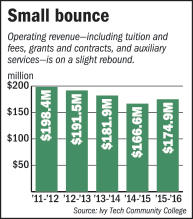 “My sense is that the landscape will be positive for them this time,” Lubbers said. “Everybody knows how important Ivy Tech’s success is and we’re all anxious to work together.”

Kenley said it appears Ivy Tech is going in a better direction now than it was two years ago when he said it was “time to call timeout” on the institution and not fund the capital requests.

He said he was concerned at the time that “it just seemed like the workforce development needs and the offerings at Ivy Tech weren’t quite matched up.”

This year, Kenley authored a bill meant to help Ivy Tech align itself with the needs of the state’s workforce. It required Ivy Tech to hire top leaders focused on aligning programs to meet workforce demand and creating stronger relationships with the Department of Workforce Development.

Kenley also said that lawmakers two years ago were concerned with student success. This year, the community college system will be able to show it has improved—albeit slightly—in that area.

“Ivy Tech’s graduation and completion rates have not been strong,” Kenley said. “I’m really going to be focused in on seeing some improvement in that area.”

Others, including Democratic state Rep. Terry Goodin of Austin, a member of the State Budget Committee, are worried about whether Ivy Tech “has been given a task they can’t accomplish.”

But Ellspermann said she is bullish on the community college’s prospects, calling Ivy Tech “the biggest workforce engine the state has.”

“That’s really the pitch” to lawmakers, Ellspermann said. “We are such an important part of the solution for Indiana, to ensure Hoosiers have prosperity. Doing the right things and showing the results is our best way of moving forward.” 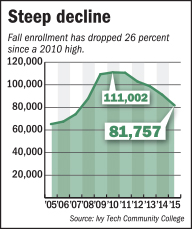 Ellspermann said she wants to show lawmakers the college has an aggressive mission to increase the number of Ivy Tech graduates and meet the state’s workforce needs.

She hopes to more than double the number of credentials Ivy Tech students earn each year—from about 20,000 to 50,000—to meet a larger goal of helping the state reach a point by 2025 where60 percent of its workforce has some sort of college degree.

“It doesn’t look like it from the outside,” Ellspermann said, “but from the inside we are really moving quickly.”

Efforts she and her team have been working on include:

■ A campaign to convince dropouts to return to college to complete their certificates. 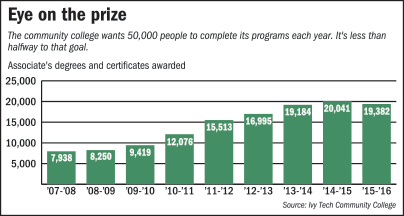 ■ An effort to maximize capacity in popular programs and align individual campuses’ programs to regional needs.

■ Counseling to help students better understand which areas of study are likely to have good jobs waiting on the other end.

■ An effort to increase the number of high school students who complete dual-credit programs.

Ellspermann said her vision for success is not just about meeting abstract targets; there are real people’s futures at stake.

Ellspermann recalled a recent encounter she had in Terre Haute with Ivy Tech student Jeremy Baker as she guest-lectured an introductory career exploration course.

The student told the Terre Haute Tribune Star that he had previously worked in manufacturing and was daunted by the thought of returning to school, but that he was pleasantly surprised with what he found when he did.

Ellspermann said “it really does something to you when you hear that.”

“What we need is to help Hoosiers believe they can do it, that the investment in themselves is worth it,” she added. “This is a chance to move people [up] who have not had secure incomes, who have not gotten to enjoy the middle class life, who have experienced challenges.”•