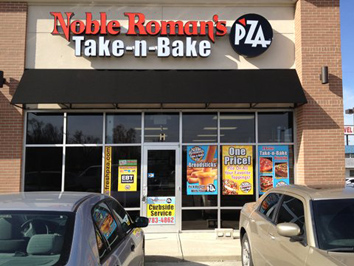 After years of trying to sell stand-alone take-and-bake pizza franchises, Noble Roman’s Inc. is abandoning the strategy to concentrate on a new restaurant concept, the Indianapolis-based company disclosed Monday.

Noble Roman’s predicted big growth potential for the standalone take-and-bake concept when it began rolling out the franchises in October 2012. Within the first eight months, seven franchised stores—dubbed Noble Roman’s Take-n-Bake P’ZA—had opened and nine more were in development or under construction.

The company had 22 of the franchises open in late 2014 and envisioned having as many as 70 by the end of 2015, but that number instead appears to have fallen to fewer than 10, according to the company’s website. The company did not disclose its plans for the existing take-and-bake stores, which are in Indiana, Colorado and California.

In its third-quarter earnings statement Monday, Noble Roman’s said it made the decision to “discontinue expansion of its stand-alone take-n-bake concept so that management’s efforts could be fully focused on the modernized Craft Pizza & Pub.”

The 4,200-square-foot, 140-seat restaurant is planned for the Monon Marketplace at 17409 Wheeler Road, near State Road 32 and U.S. 31. The menu includes thin-crust and deep-dish Sicilian pizza, salads, pasta and breadsticks. Craft and traditional beer will be sold, along with wine by the glass and bottle. Customers will order at the counter, and employees will deliver orders to the seating area for dine-in guests.

The company describes the new concept as “a modernization and redesign" of the original Noble Roman's pizzeria concept, which originated in 1972 and was called "Pizza Pub." To help fund the expansion of the new concept, the company said it is in the process of raising up to $2 million through the sale of promissory notes and warrants convertible into common stock.

Noble Roman's said its original stand-alone restaurants began falling out of favor in part because of long wait times for the pizza. Pizzas in the new prototype will be cooked in as little as two-and-a-half minutes.

The first two Pizza Pub restaurant will be company-owned and operated, the company said. Future units will be franchised.

"We believe Noble Roman's Craft Pizza & Pub is the most exciting development for the company since it pioneered the non-traditional pizza venue,” CEO Scott Mobley said in a written statement. “This stand-alone pizzeria concept is the culmination of some of the best of our history combined with all new, leading edge technology and recipes to produce what we think will be a terrific growth vehicle for the future."

Revenue in the latest period was more than $2 million, up from $1.9 million in the year-ago quarter.

The company said it continues to see growth with its line of take-and-bake pizzas sold in grocery stores. The company added two grocery distributors in September and October, and has added 402 grocery locations this year. Royalties and fees from the grocery store take-and-bake program were $531,000 in the third quarter compared with $486,000 in the same period a year ago.

The company also inked an agreement last month to become the preferred supplier for TMC Franchise Corp., which has 800 convenience stores under the Circle K, Kangaroo Express and On the Run names.

Noble Roman's shares were up 2 cents Tuesday morning, to 40 cents per share.