Hotel occupancy rates are plunging nationwide, but industry watchers think Indianapolis is as likely as any market to rebound.

Hotel occupancy in the Indianapolis market was down 12.8 percent this May compared with last May and down 12.2 percent
in June, according to Tennessee-based Smith Travel Research, an industry leader in hotel and travel statistics.

Revenue per room—a key measure of hotel business operations—also was down locally over the same months last
year; 22.8 percent in May and 17.7 percent in June.

Mark Eble, a hotel consultant and Midwest regional vice president
for San Francisco-based PKF Consulting Corp., said the current downturn is worse than the post 9/11 slide and among the worst
swoons the hotel industry has seen in his 30 years in the business.

“Luckily, Indianapolis is not the hardest-hit
city in the country,” Eble said.

Citywide hotel occupancy for the first six months of 2009—at 51.9
percent—is down 10.9 percent compared with the same period for 2008. The percentage decline is identical to national
figures. Local revenue per room—at $44.42—is down 17.4 percent for the same period. The national decline was 18.7
percent. 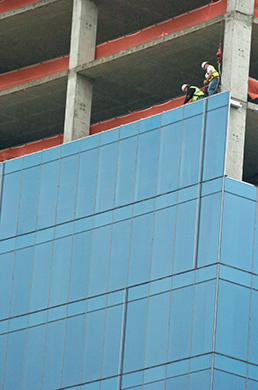 Developers of the JW Marriott on downtown’s west side aren’t worried the 1,650-room complex will flood
a struggling market. (IBJ Photo/Robin Jerstad)

While most downtown hoteliers think the ongoing Indiana Convention
Center expansion will boost business in the long term, they think it’s compounding the current slump, which began early
last year.

“Meeting and convention planners are a little nervous that their meetings will be disrupted
by the construction at the Convention Center,” said Dale McCarty, general manager of The Westin at 50 S. Capitol Ave.
“We’re looking out over the next two years and can see we’ll really have to scramble to fill that void.”

Forty percent of The Westin’s business comes from people attending Convention Center functions, McCarty said.
To pick up the slack,The Westin has relied on secondary sales services such as Priceline, Hotels.com and Expedia to fill its
rooms.

The Indiana Convention Center’s $275 million, 420,000-square-foot expansion is expected to be finished
in December 2010. Including Lucas Oil Stadium, the Indianapolis Convention and Visitors Association will have 1.2 million
square feet of convention space, 65 percent more than it had in the Convention Center and RCA Dome.

“Since
a lot of our business is convention related and is booked three to six years out, we could see this coming,” said Jesse
Ghumm, Hampton Inn Downtown general manager. “Of course, the economy has piled onto the problem, so we have to stay
positive and keep on top of our marketing efforts.”

ICVA CEO Don Welsh points to a near 70-percent occupancy
rate in downtown hotels this June as proof that Indianapolis is holding up well in the worst economic swoon since the Great
Depression.

Welsh also points out that Indianapolis occupancy and room rates are stronger than in many other
cities, including San Jose and Oakland, Calif., where revenue per room dropped 31 percent and 24 percent, respectively, so
far this year. San Antonio, Texas, has seen a 23-percent drop.

Indianapolis’ declines are in line with
other Midwest cities, such as Cincinnati and Kansas City. The declines here are somewhat worse than they are in Louisville,
which has seen a year-to-date occupancy decline of 6.8 percent and 11.5 percent in revenue per room. Milwaukee has fared worse
than Indianapolis, with a 17.2-percent occupancy decline and 22-percent decline in revenue per room.

Overall,
the Midwest has fared worse than Indianapolis, with revenue per room dropping 23.6 percent. Much of that is due to a dramatic
drop in business in Chicago, the Midwest’s biggest convention city.

Convention and trade show attendance
nationwide has seen double-digit declines, Welsh said, but Indianapolis has fared better. “Our business here is less
corporate and more association-related,” Welsh said. “Corporate meetings and conventions have seen declines in
attendance this year of more than 50 percent. Convention attendance in Indianapolis is only down 8 to 10 percent.

Ghumm agreed. He said The Hampton Inn Downtown has had to rely more than in previous
years on packages and has been offering extras such as the Indianapolis Zoo and Children’s Museum admittance, downtown
carriage rides or Ruth’s Chris Steak House and Circle Centre mall gift cards.

Ghumm said hoteliers here
are targeting 2011 and 2012 for a big growth in business. They’re counting on the economy to rebound by then so that
they can take full advantage of the completed Convention Center expansion and the build-up to the Super Bowl in 2012.

Hotel analysts aren’t overly concerned about the new JW Marriott on the west side of downtown flooding the sagging
hotel market. The 1,650-room complex is scheduled to open in February 2011.

“All our forecasts tell us
the rest of this year is going to be pretty miserable,” said PKF’s Eble. “But we expect the turnaround to
begin in the first part of 2010 and the real growth to start during the second half of 2010. I’m optimistic, given the
city’s positioning, the JW Marriott will do very well.”

The hotel’s developers, REI Investments
and Merrillville-based White Lodging, think the JW Marriott will bring in new business and have little negative effect on
existing hotels. The project will be anchored by a 34-story, 1,005-room hotel with a 3,000-square-foot ballroom. It will be
the largest single hotel in Indianapolis by about 400 rooms.

“This development will bring in an entirely
different kind of convention business that couldn’t come here before because there wasn’t a large-enough headquarter
hotel,” said REI President Mike Wells. “I think the economy will pick back up by the time we launch, and I think
this property will mesh in very nicely with the current downtown landscape.”

Critical to positioning the local
hotel market for growth, Welsh said, is continued marketing of Indianapolis’ offerings to convention organizers and
leisure travelers nationwide. The ICVA is currently seeking $1 million from the Capital Improvement Board for marketing this
year and $3 million a year in 2010, 2011 and 2012. Welsh called securing that funding the ICVA’s “most immediate
concern.”

With the CIB mired in a major budget crunch, that marketing money is far from certain.

“We agree 100 percent those marketing dollars are vital for the whole downtown economy,” said CIB member
Pat Early. “But … everything is on the table … we’re still faced with making cuts.”•