Home » After Carrier deal, will more manufacturers threaten to leave? 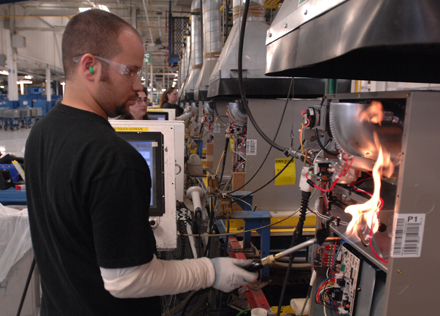 At recent cocktail parties, site-selection expert Katie Culp has heard this more than once: “It must be a great time to be in your line of work.”

Culp, president of KSM Location Advisors, said people assume the situation playing out at Carrier Corp. will inspire a long line of other companies to put their hands out for public incentives. KSM’s services include helping clients apply for incentives.

“I joke, ‘Yeah, it would be nice if that’s the way it was going to be,’” Culp said. But despite the fact that Carrier itself said state incentives—a package that included an uncommon tax break—helped convince it to retain some of its Indianapolis workforce, Culp doesn’t think Indiana’s incentives floodgates are about to swing open.

Carrier had announced in February that it would cease production at its Indianapolis facility, moving that work to Monterrey, Mexico. But late last month, the company reversed course, saying it would maintain its gas furnace production in Indianapolis.

Of the $7 million in economic development incentives the Indiana Economic Development Corp. has offered Carrier, $5 million comes in the form of a rarely offered tax credit—one aimed at job retention rather than job creation.

“I don’t think there are a lot of companies who are willing to threaten to leave in order to secure incentives,” said Culp, who was not involved with the Carrier deal.

But not everyone agrees with Culp’s view.

Mohan Tatikonda, professor of operations management at the Indiana University Kelley School of Business in Indianapolis, said “it’s almost inevitable” that a growing number of companies will seek incentives for job retention rather than job creation.

Those on both sides of the fence offer multiple reasons why the Carrier deal will—or won’t—inspire a rush of other companies trying for retention incentives.

The particular tax credit offered to Carrier is known as the Economic Development for a Growing Economy Tax Credit for Job Retention—or EDGE-R, for short. Companies that receive this incentive can claim tax credits for a certain period of time if they maintain a specified number of jobs at a given wage level.

IEDC offers the EDGE-R incentive much less frequently than it offers EDGE for Job Creation, which offers employers tax credits for adding jobs. That’s by design, the agency says.

“The mission of the IEDC is to help companies locate and create great new jobs across Indiana, which by definition means that retention projects in the state are rare,” IEDC spokeswoman Holly Gillham said in an e-mail to IBJ.

In comparison, IEDC offered EDGE-R incentives to only 11 employers during those same years. The incentive carries more rules and restrictions than does the EDGE credit, and by state law IEDC cannot offer more than $10 million in EDGE-R incentives during a single year.

“The Indiana General Assembly set this cap in the interest of fiscal discipline, helping create an environment where the IEDC must be very strategic when offering tax credits for job retention, as we were in this case with Carrier,” Gillham wrote.

To date, the largest single EDGE-R award was for $8 million. That award, granted in 2014, went to Fort Wayne aerospace manufacturer BAE Systems Controls Inc. In exchange for the tax credits, BAE agreed to maintain 1,000 jobs and build a $32.3 million manufacturing facility for its local operations. That facility, which makes commercial aircraft electronics, ultimately cost $39 million. It opened in September 2015.

Under the terms of its deal with IEDC, BAE can claim up to $800,000 annually in EDGE-R tax credits over a 10-year period ending in 2023. To date, the company has claimed $1.6 million, according to an online IEDC database.

Companies that are offered incentives typically receive packages containing two or more types of tax credits or funding. In addition to EDGE-R, IEDC is also offering Carrier $1 million in training grants and up to another $1 million in tax credits based on the company’s plans to invest $16 million in the plant. IEDC is set to consider the entire incentives package at its Dec. 13 meeting.

Chad Sweeney, senior principal at Fishers-based consulting firm Ginovus, described EDGE-R as “a tool that has a high bar.”

Sweeney, who worked at IEDC from 2005 to 2009, said EDGE-R is generally considered an economic development tool for use in “extraordinary circumstances.”

Though he was not involved with the Carrier deal, Sweeney said the case qualifies as extraordinary. Carrier had already announced its intentions and started to lay the groundwork for moving the jobs.

It’s unlikely that a company would be willing to take such steps just for the purpose of securing job-retention incentives, Sweeney said.

For that reason, he said, he doesn’t think Carrier’s situation will lead to a flood of other requests. “I honestly don’t think it’ll have a significant impact.”

Another reason companies might not rush to apply for incentives: The deals open a company up to public scrutiny.

All the incentives contracts IEDC signs with employers are made available to the public—and not every employer wants to attract that level of publicity, Culp said.

Carrier declined to comment for this story, referring IBJ back to the brief statement it issued Nov. 30 when it announced it would keep some jobs in Indianapolis. But the company continues to be in the news because of the Indianapolis situation.

IU’s Tatikonda agreed with Culp and Sweeney that Carrier’s situation is unique. He still predicted, though, that job-retention deals will become more common.

For one thing, he said, companies have a more mobile mind-set than they used to. 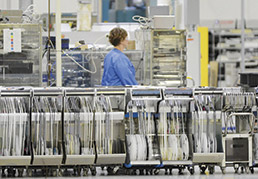 Under the traditional theory of economic development, Tatikonda said, state and local governments have operated under the assumption that, once a company came to town, it would stay put. That thinking is out of date, he said.

“It is different, but it’s not that different and it’s becoming less different,” he said.

Modern manufacturing processes are more portable, Tatikonda said, because they use equipment configured in modular units that can be set up and moved as needed. That means companies are more willing to consider relocation if it’s financially advantageous.

“The mobility of manufacturing is increasing, and that—combined with this constant pressure to provide greater returns to shareholders—means that we are going to see more companies making these types of requests,” he said.

Also, the Carrier publicity might have introduced the concept of retention incentives to some midsize or small companies who could now be inspired to try for them, Tatikonda said.

Per state law, recipients of both EDGE and EDGE-R incentives can receive the tax credits only if they meet promised job-retention or -creation metrics. And for both types of incentives, recipients have a two-year, post-contract period in which they must remain in compliance or become subject to clawback provisions.

Regardless of these rules, there’s no guarantee that a given group of jobs will stick around indefinitely.

Steuben County employer Multi-Plex, for instance, was approved for $370,000 in EDGE-R credits in 2007. The company, a division of Detroit-based Magna Powertrain, ended up closing that facility before it claimed any of those credits, IEDC’s Gillham said.

A more recent example is Paoli LLC, an Orleans-based furniture maker that in October announced plans to cease operations at the southern Indiana facility.

The company has since claimed the full amount of its EDGE and EDGE-R tax credits, and $117,000 in training credits. 2016 marks the final year of its post-contract reporting period—and it plans to begin shutting down the plant in January, putting it right outside the clawback period.

At that time, Carlson said, HNI had just shuttered an Owensboro, Kentucky, plant and moved that work to Orleans. The thinking, Carlson said, was that this extra production—plus additional production from new business—would be enough to help the Orleans plant operate more profitably.

But those plans never came to pass, he said. Domestic and international competition in the office-furniture business, coupled with overall consolidation and a tough economy, all took their toll.

The work currently being done in Orleans will be sent to other HNI facilities in North Carolina, New York and Iowa.

Carlson said it’s pure coincidence that the Orleans plant is winding down just as the company is coming to the end of its incentives reporting period.

“Ultimately, you have to align with what the market needs,” he said. “It’s a very difficult decision to close a facility.”•