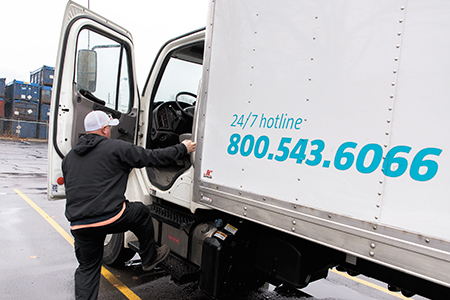 If forecasts are accurate, 2017 will bring something we haven’t seen in five years—higher gas prices.

Following high prices and volatility during the Great Recession and its aftermath, average gasoline prices have been steadily dropping since 2012.

That trend is set to end this year, according to government forecasting.

The 2017 increase likely won’t be large—the U.S. Energy Information Administration predicts a national average retail price of $2.38 per gallon, up from $2.15 in 2016. But a range of local companies, from logistics providers to auto auctioneers, say they’re keeping an eye on the situation.

“We have 500 drivers, so it’s something we watch pretty closely,” said Ryan Schwalbach, CEO of Indianapolis-based Now Courier Co.

The company, which offers delivery, warehousing and logistics services, also has offices in Evansville, Fort Wayne, Merrillville and South Bend, as well as in Louisville and Cincinnati.

With the economy doing well, Schwalbach said, the company already is in the midst of a “severe drought” of drivers.

MORE FROM IBJ
See how the retail price of gasoline is expected to rise.

When gas prices go up, he said, it becomes even harder to recruit drivers because Now’s drivers are independent contractors who pay for their own fuel and vehicle expenses.

Most of Now’s customers pay a fuel surcharge that kicks in when gas reaches $2.10 a gallon. That surcharge is a percentage of the overall delivery fee, Schwalbach said, and as gas prices increase, so does the surcharge. But he said the surcharge isn’t enough to fully reimburse drivers for their increased fuel costs.

Schwalbach said he doesn’t expect a return to the record-high $3.62-a-gallon average from 2012, but he believes prices could climb close to $3 a gallon.

According to the Energy Information Administration’s Short-Term Energy Outlook, issued monthly, the national average for unleaded gasoline this year is expected to be $2.38 per gallon, rising to $2.41 in 2018. Diesel prices are expected to rise, too—from $2.31 per gallon last year to $2.73 this year, and $2.84 in 2018.

“We kind of reached a low point with all prices at the beginning of 2016,” said Sean Hill, an economist with the Energy Information Administration.

Prices for gasoline, diesel and oil all fell in recent years because their supplies grew faster than demand, Hill said. But U.S. production declined over the past year, he added, and overseas production is expected to drop this year.

“The market is kind of getting back into balance.”

Companies across central Indiana, a hotbed for the transportation and logistics industries, will feel the consequences of higher fuel costs if predictions come true.

The company is based in New York City but has significant operations in Indianapolis, including about 170 corporate employees and another 500 or so at distribution centers in Indianapolis and Plainfield.

Edgington is also chairman of Conexus Indiana, an Indianapolis-based organization focused on strengthening the state’s advanced manufacturing and logistics sectors.

Fuel prices have an impact on shipping prices, which affect a wide range of companies, Edgington said.

Fullbeauty imports its goods from overseas via shipping containers, and its per-container shipping cost includes a fuel surcharge.

Shipping costs are also a factor on the other end, as Fullbeauty delivers its clothing to consumers. The apparel company uses FedEx, Edgington said, and the companies work together to each absorb some of the delivery cost.

“There’s not much you can do [to prepare] other than establish strong relationships with transportation partners and try to figure out where the meeting point is,” he said.

DeFabis is chairman of Conexus’ Indiana Logistics Council and of the International Warehouse and Logistics Association.

IDS specializes in logistics for e-commerce companies. When shippers like UPS and FedEx charge more to cover their increased fuel costs, some of that gets passed down the line to IDS’ clients. It’s the logistics company’s job to help mitigate that pain.

That might involve helping clients redesign their packaging, rethink where they ship products from, or bundle shipping so they can get volume discounts.

‘A bit of skepticism’

A sustained increase in gas prices would ripple through the used-car market, including Carmel-based KAR Auction Services. KAR runs auto auctions and provides related services, such as funding for used-car dealers.

Fuel prices crept up in December and early January in response to news that OPEC countries, along with Russia, pledged to cut back on oil production, said Tom Kontos, chief economist for ADESA Analytical Services, a KAR business unit.

“I’m casting a bit of skepticism about whether the supply curtailments will actually happen,” Kontos said. “This situation won’t necessarily be dramatic going forward.”

But the situation is complex, Kontos said, and fuel prices aren’t the only factor.

“It’s just like a stock market,” he said. “You see the value of used vehicles fluctuate based on all known news at that moment.”

And changes in the vehicle industry itself are making gas prices a less reliable indicator of vehicle demand, Kontos said.

When gas prices sometimes passed $4 several years ago, he said, both consumers and manufacturers lost their taste for large vehicles.

The situation is different today, Kontos said, because technology and lighter parts mean even large vehicles are more fuel-efficient. And with the rise in crossover vehicles, there’s less of a distinction than there used to be between, say, passenger vehicles and SUVs.

Some business and government units are blunting the impact of price swings by locking in prices.

For example, in December, IndyGo inked a 12-month diesel fuel contract with Avon-based Co-Alliance LLP. The $3.1 million deal allows the bus service to buy up to 1.7 million gallons of diesel fuel at $1.78 per gallon.

That should cover about 80 percent of IndyGo’s fuel needs this year, said spokesman Bryan Luellen.

“This has been our strategy for several years, to evaluate the market and lock in when it’s advantageous,” he said.

“The fluctuations are really damaging to the business, and we need predictability.”•