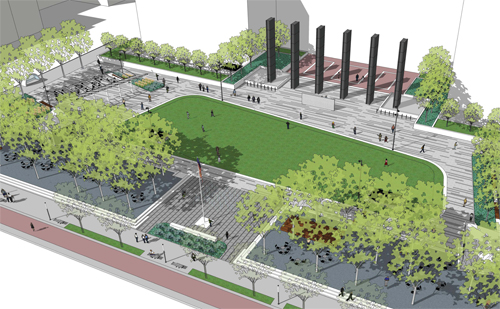 City officials on Thursday unveiled plans for a new redesign of the City-County Building outdoor plaza after the first attempt to liven up the space proved too pricey and never got off the drawing board.

Rundell Ernstberger’s plans prominently depict an event lawn in the middle of the property along East Washington Street that could hold at least 1,500 people. To the south, an interactive fountain with up to 30 jets fronts the Cultural Trail and is surrounded on both sides by raised areas of trees that form a street wall along Washington.

Seating areas on the east and west sides of the lawn, a large 1,000-square-foot shade canopy with leisure swings, and an interactive public artwork area also are part of the plans.

The DMD expects construction to begin in the summer and take about a year to complete.

A redesign of the dated plaza has been in the works for more than two years. Under the administration of former Mayor Greg Ballard, the city in October 2014 selected Baltimore-based Design Collective to design the project. But its bid came in well above the $10 million budget. 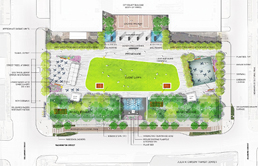 Click on the image for a larger map of the plaza.

The new budget is $9 million. Lilly Endowment Inc. has agreed to contribute $5 million toward the project. (Click on map for larger view.)

Rundell Ernstberger has been involved in projects such as the Cultural Trail and Julia M. Carson Transit Center.