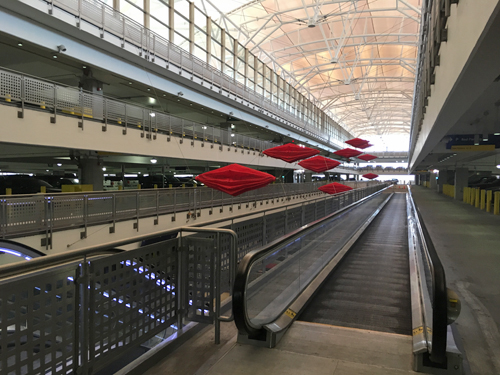 The Indianapolis Airport Authority says it has fixed long-standing problems with water infiltration in its open-air parking garage, and now it’s ready to spend as much as $10 million on additional upgrades to the structure.

At its Jan. 20 meeting, the authority greenlighted a project that includes rehabbing and replacing electrical equipment and ductwork in the garage’s elevators, moving walkways and escalators; and installing sump pumps to keep water away from the workings of the elevators and escalators.

The authority expects to award the contract in April, with work expected to be completed in spring 2018. The airport's estimate for the cost of the project is between $5 million and $10 million.

Shannetta Griffin, an engineer who serves as the airport authority’s senior director of planning and development, said the work is necessary due to corrosion caused by exposure to the elements since the garage opened in 2008.

The upgrade will include installation of outdoor-appropriate equipment, replacing the indoor-rated equipment that was originally installed. The switch should reduce maintenance expenses going forward, Griffin said.

Griffin said she’s unsure why the open-air garage, which opened in 2008, was installed with indoor-rated equipment in the first place.

“A majority of the people who are here [currently] weren’t the ones making those decisions,” Griffin told IBJ. Griffin joined the airport authority staff four years ago.

The new outdoor-rated equipment should have a useful lifespan of between 10 and 20 years, she said.

The airport authority already has spent millions on parking garage work since the structure opened in 2008, much of it related to the fabric canopy that serves as the roof of the garage's atrium-like open-air section.

One big problem: Just like an umbrella that leaves its user exposed to side-blowing rain, the canopy didn’t totally protect the garage from precipitation.

In December, the airport completed a $9.5 million project to address this issue. Workers replaced the canopy and built a glass enclosure wall on the top floor of the five-story garage. The wall, whose perimeter sits just inside the outer edge of the canopy, is designed to reduce the amount of precipitation that comes in from the sides.

The airport also experienced previous problems with the canopy, which collapsed under the weight of snow and ice in 2011 and suffered a rip for the same reason in 2014.

Griffin said there’s “zero” correlation between previous canopy failures and the work needed on the elevators, escalators and moving sidewalk. Most of the problem, she said, came from the water infiltration issue which the glass wall has now addressed.

“We can never get to zero percent precipitation coming through in an outdoor facility,” Griffin said, but the wall is doing its intended job.

The upcoming work will be done in phases, Griffin said, so that passenger inconvenience is minimized. For instance, workers won’t take all of the elevators down for maintenance at one time.

Keeping the parking garage in good repair is important because the structure brings in a lot of money for the airport authority.

The garage generated $29 million in revenue last year, and over its lifetime the garage has brought in $170 million.

Including its garage and its surface lots, the airport expects to earn about $47.5 million, or 25 percent of its total revenue, from parking in 2017.

It’s this revenue that will pay for the upcoming garage work, Griffin said.