Pam Miltner always says she was blessed with breast cancer. The 24-year survivor didn’t know anyone when she moved to Indianapolis from a small town, and she never imagined she’d be able to find her idea of community here.

Then she was diagnosed with breast cancer in 1993. It was life-changing for Miltner and her husband, Tom, and they soon began exploring ways to support the local breast cancer community. An obvious opportunity was the Susan G. Komen Race for the Cure, which they attended for the first time in 1994 when the race was relatively new. Pam was embraced by organizers and other participants. “I didn’t feel like a survivor yet, but they made me feel like family.” 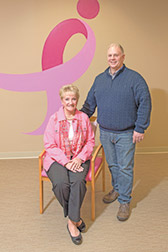 That first encounter with Komen led the Miltners to what would become their Indianapolis family. “Beyond the cause and the cure, the most rewarding piece has been the development of family and friends and a real sense of community,” she said.

Once the Miltners got involved, they were all in. They’ve co-chaired the race three times, including in 2016, its 25th anniversary. They were the first married couple to co-chair the event and Pam, 63, was the first survivor to chair it. Tom, 53, one of the first men to dedicate significant volunteer hours to Komen, is described by organizers as the “calm in the storm and the detailed technician.”

He was the operations chairman for more than 10 years, managing registration, organizing packet pickup and crunching the numbers when all was said and done. Pam led recruitment of race teams; was in charge of fundraising; served as liaison to the local celebrities who’ve been involved; and introduced the Pink Parade, a celebration of survivors she imported after seeing it at a Komen race in another city.

Tom introduced online registration to the event more than 10 years ago, which significantly reduced the volume of paper the Miltners had to deal with. In the early years, the garage of their New Palestine home was full of boxes of entry forms leading up to the race.

Nikki Mazelin, development director for Komen Central Indiana, said the Miltners’ involvement has reached well beyond the race. They have led, participated in or attended nearly every event the organization has and both have served on the board. Pam was instrumental in creating the Circle of Hope celebration, a recognition program that honors survivors, volunteers and businesses that support Komen. She also helped create Komen Central Indiana Ambassadors, which encourages breast cancer survivors to share their stories throughout the community in the months leading up to the race.

Along with other volunteer leaders, the Miltners have had a tremendous impact on the event, Mazelin said. Since 1992, the race has attracted over half a million participants and raised more than $20 million to fund breast health services and education.

The Miltners said they’re trying to scale back their involvement, but they don’t sound confident they will succeed. The planning for the race is really a year-long commitment, they said, but it begins in earnest in September and builds in intensity up until the race in April.

“I can’t imagine life without my Komen family,” Pam said. “I’ve met so many friends. It just proves your family isn’t always blood.”•