Home » Regions rolls out vision for branch of the future 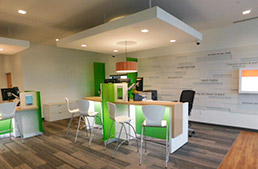 Regions Bank last month unveiled a branch that does not feature teller lines, a format that likely will be replicated at other locations.

The Birmingham, Alabama-based bank on Feb. 16 held a grand opening of sorts for the new branch, which is at 11447 Spring Mill Road in Carmel. It’s the second branch of its kind in the state behind a prototype in West Lafayette that debuted in the fall of 2014.

Bank officials called the new Carmel location the “most modern location in Indiana to date.” It features an open layout, extended hours and video-teller ATMs.

“It allows our customers to really bank the way that they’d like to bank,” Phil Nunn, Regions Indiana consumer banking executive, said during a recent tour.

Traditional bank branches often dedicate a sizable chunk of their floor space to transactions, with consultative and financial-product discussions typically handled by specialists in private areas. But Region’s new branch upends that model.

Staffers at the new branch are called universal bankers, and they can handle a variety of customer requests, including debt-repayment guidance and business-loan applications. Their barstool-height work stations make up the bulk of the main floor, and so-called “pink noise” keeps nearby people from hearing their conversations with customers.

Universal bankers also handle routine transactions, such as depositing a check, but several self-service options are available for doing so outside the main floor. Customers can chat with an Alabama-based “video banker” via ATMs in the bank’s lobby or drive-thru.

Officials declined to comment about plans for the branch format across Indiana. But spokesman Jeremy King said nine such branches exist outside Indiana and that “this format will continue to be incorporated into upcoming locations or utilized in renovations of existing branches.”•