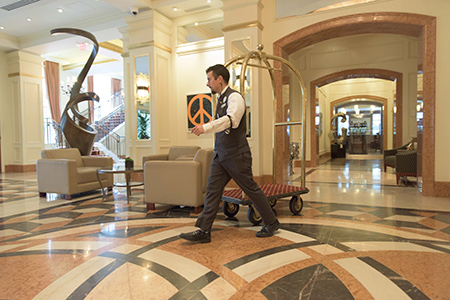 Here’s a little-known fact: The city of Indianapolis has an ownership stake in two of downtown’s most luxurious hotels and has received nearly $1.2 million so far from one of the investments.

The city’s interest in the Conrad Indianapolis and JW Marriott are so far below the radar that Mayor Joe Hogsett’s appointee to lead the Local Public Improvement Bond Bank didn’t even unearth them until months into her tenure.

“I learned from my team, about a year ago, that the bond bank was receiving checks from this Circle Block Partners entity,” Sarah Riordan, the bond bank’s executive director and general counsel, told IBJ. “That’s when I discovered the participating loan agreement.”

The city’s ownership in the newer JW Marriott, which opened in 2011, has not matured enough to pay a return yet.

Riordan said she had no idea the city’s JW Marriott deal even existed until discovering it last summer—roughly six months after she arrived at the bond bank. The bond bank issues debt to fund city-backed projects and refinances debt when market conditions are favorable.

The investing climate was anything but favorable in 2008, when plans for the JW Marriott were coming together. As the financial crisis was setting in, the city agreed to kick in $59.5 million toward the construction of a $450 million campus of hotels, including the 1,005-room flagship JW on land across from Victory Field, to help secure its Super Bowl bid for 2012.

The 34-story JW is by far the city’s largest hotel, capturing 13.4 percent of the downtown market, according to CBRE Hotels.

The city’s participation agreement with owner White Lodging calls for the city to receive 25 percent of any annual profit that remains after the owner pockets a 16 percent return on its investment.

Merrillville-based White Lodging developed the JW Marriott project in partnership with Indianapolis-based REI Real Estate Services and has yet to hit the threshold triggering payments to the city.

When that might happen is unclear. Riordan is still gathering information on the deal, and White Lodging didn’t address the question in a statement from Deno Yiankes, president of the company’s investments and development division.

“The vision and faith of Dean and Bruce White to invest in the future of Indianapolis when things looked bleak back in 2008, along with the vision and contributions of the city, resulted in a world-class JW Marriott hotel and all the surrounding development, which has created hundreds of permanent jobs and helped to put Indy on par with other major convention cities,” he said in an email.

Billionaire Dean White, a hotel and billboard magnate from Merrillville, died last year at age 93. His son Bruce is head of the family’s hotel empire.

Whether the city ever receives a return on its investment, beyond the taxes generated, shouldn’t be considered a major sticking point, said Rob Hunden, president of the Chicago-based Hunden Strategic Partners hotel consultancy.

“The city scored a major victory, regardless if funds are ever directly returned,” he said. “Compared with other cities that have struggled to build 1,000-room convention hotels, the subsidy here is very small relative to the cost.”

The city provided $25 million toward the $100 million Conrad project, which also included construction of 16 condos. The city’s infusion included $3.75 million it chipped the 11th hour, in return for the equivalent of an 8 percent stake.

Circle Block made 12 payments totaling $407,568 last year to the Metropolitan Development Commission, pushing the total the city has received from the deal to nearly $1.2 million.

McGowan declined to discuss the Conrad’s performance. But the payments to the city suggest the 241-room hotel is in a strong financial position.

“Ownership is proud that the Conrad generates consistent cash flow for the city of Indianapolis through a creative structure, where the city was granted a participating return on the financial success of the asset,” McGowan said.

Overall downtown occupancy for higher-priced hotels such as the Conrad and JW Marriott has remained strong since 2012, rising from 68.5 percent to 73.5 percent in 2016, statistics from CBRE Hotels show. In the same span, revenue per available room jumped from $78.20 to $114.34, even with the addition of the JW Marriott.

The city’s financial backing of the two hotels is not unusual. Local governments often fill funding gaps for downtown hotel projects, either through tax abatements or direct cash infusions, in the interest of attracting visitors and creating jobs.

“The costs to develop urban full-service hotels are very high,” Hunden said. “Unless the hotel rate structure is also high, then it’s tough for developers to justify development.”

The city financed its $59.4 million share in the JW Marriott through a tax-increment financing bond.

Bonds the city sold to fund its portion of the Conrad are backed by revenue from two parking garages: the Circle Block garage next door to the hotel and the World Wonders garage at Circle Centre mall.

The city is applying Conrad payments toward an $18 million loan on the city-owned parking garage at 101 N. Illinois St.•