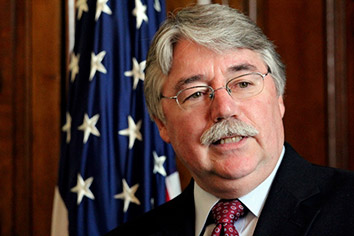 Golars Environmental and Remediation Services announced Tuesday that Zoeller would serve as general counsel for the company.

Zoeller, 62, was the state's 42nd attorney general, serving from 2009 until January. He ran for U.S. Congress last year in Indiana's 9th District but lost in the Republican primary to Trey Hollingsworth, who went on to win the election.

The company is the seventh largest environmental consulting firm in the Indianapolis area, according to IBJ research. In 2015, Golars had $9.6 million in local billings—up from $7.2 million in 2014.

“This is an opportunity to serve a growing business that applies cutting-edge science to develop solutions for environmental problems,” Zoeller said in a written statement. “It’s great to be part of a group of professionals that serve a valuable public interest.”

Zoeller has been leading the effort to bring a World Trade Center designation to Indianapolis.

Earlier this month, local officials said the World Trade Centers Association approved exclusive rights to establish one of the landing centers in Indianapolis, kicking off a lengthy application process.

Zoeller is expected to become the center’s chairman.