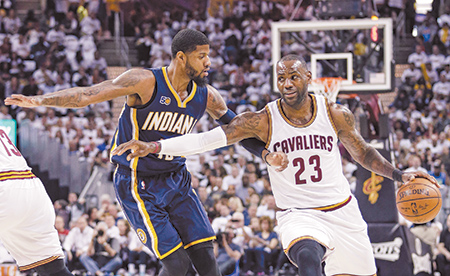 They are the three kings of the local sports landscape. The Colts. The Pacers. The Indiana basketball Hoosiers. The three primary colors of fan loyalty. Our earth, wind and fire. Our Larry, Curly and Moe.

All three now face important immediate futures, after painful and unfulfilling immediate pasts. All three started their most recent seasons with high promise, and all landed with the same distinct sound.

The thuds were deafening.

First, no playoffs for the Colts. Then, no NCAA Tournament for IU. And for the trifecta, no mercy for the Pacers from the Cavs.

When the last dirge had been played at Bankers Life Fieldhouse, the only things left to do were wonder about Paul George’s future, talk stats the way losing postseason teams do—wasn’t it swell, how the Pacers tied an NBA playoff record, getting swept in four games by a combined 16 points?—and start the campaign for hosting the 2021 All-Star Game. If Larry Bird couldn’t steer his team past the first round, he could at least drive an Indy car in midtown Manhattan.

Throw the Pacers, Hoosiers and Colts together, and here’s what you have to show for the past year: a combined record of 68-68. Can’t get much more average than that. Middling America. And not one postseason victory among them. That hadn’t happened since 2010.

There have been questions about what has been squandered by all three. Paul George’s prime. Andrew Luck’s passing. All those Hoosier points.

The frustration needle has ticked so high at all three places, past glories became less relevant.

It didn’t matter so much that Crean once nursed a shattered Indiana program back to health. Being a state treasure hasn’t saved Larry Bird from stones. Nor Chuck Pagano, once transformed into a civic hero as he beat cancer. 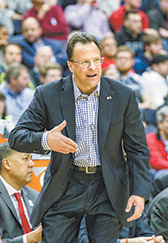 Enthusiasm and high hopes nine years ago for what Coach Tom Crean could accomplish with and for the Hoosiers sputtered and died this season. (AP photo)

All three teams have had days where you wondered about their defense, their purpose, their flaws. And so much more was expected from each.

All three have had us thumbing through history, for the wrong reasons.

Was the Game 3 meltdown against Cleveland the worst postseason loss ever for the Pacers? Felt that way at the moment, but then, the newest pain is always the most searing, at least for a while.

One could argue Game 6 of the 1994 Eastern Conference Finals still tops the list, when it comes to deep impact. In that one, an Indiana team that was 6-0 at home in the postseason by an average of 15.5 points needed only one more Market Square Arena win to finish off the New York Knicks and advance to the NBA Finals. Once there, matched with Houston, the Pacers would have had every chance for a title—unlike against the stacked Los Angeles Lakers in 2000. Instead, they fumbled the chance away 98-91 and never made it.

But blowing a 26-point lead at home in the playoffs—yeah, that will linger awhile.

Meanwhile, has anyone ever done what the Hoosiers managed—beat two eventual No. 1 seeds and the national champion during the regular season, and still not even get invited to the NCAA Tournament?

As for the Colts, they’ve had us searching the past for last times. As in last time they didn’t start a season 0-2 … last time they went consecutive seasons without a playoff spot … last time a division team gave them as much trouble as the Houston Texans.

The Colts. The Pacers. The Hoosiers. The three top brand names in this part of the world. But lately, in terms of unanswered potential, the Bermuda Triangle. And now all three face critical moments of truth.

There is hope Archie Miller is the missing link in Bloomington. And Chris Ballard is the same thing for the Colts. 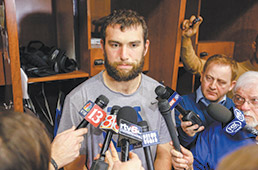 Indianapolis Colts quarterback Andrew Luck talked to reporters about the Colts’ 8-8, playoff-less season as players cleaned out their lockers in January. His nagging 2015 shoulder injury could affect this season. (AP photo)

There is worry that the end will come soon for George as a Pacer. And if so, what then? Move over, Brooklyn Nets? There is anxiety over Luck’s health, and his help. Curiosity about the new faces in the draft on West 56th Street, and the new recruits at Indiana.

What we have here are three teams all yearning for tomorrow to be like yesterday. For the Colts to be the team to beat once more in the AFC South, the Pacers an Eastern Conference contender again, IU a return to Big Ten power. For January to be brighter for one, and June for another, and March for the third.

How’s that old adage go, bad things happen in threes? They haven’t been bad, exactly—just less than advertised. Now, they all seem to have shown up together at the same crossroads.•