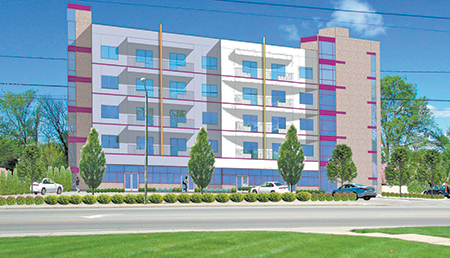 Plans to build a $10 million apartment-and-retail project on Broad Ripple’s main drag would add to the 500 apartment units already in the works there, as village leaders strive to bolster daytime traffic in the neighborhood.

The project, from local developer Zinkan & Barker Development Co., would feature up to 35 apartments and 7,000 square feet of ground-floor retail on the one-acre property now home to a billboard and.a small retail building on the east end of Broad Ripple Avenue.

The building, occupied by electronic cigarette and pet-grooming businesses, sits in front of Broad Ripple Park and would be demolished to make way for the five-story development and underground parking.

While the number of proposed units is smaller than what other multi-family projects are boasting in Broad Ripple, the development nonetheless would play a significant role in broadening the village’s transformation from a nightclub-studded neighborhood.

It would help to revitalize the eastern end of Broad Ripple, which lacks the bustle of the west side—now anchored by the $37 million Coil apartment project and Fresh Thyme grocery store. The Zinkan project also would contribute to village leaders’ efforts to establish a river walk bounding White River and extending to the park from the Monon Trail.

“This area really needs some TLC and some investment, and this is a great start to that,” said Sam Zinkan, Zinkan & Barker’s business development manager.

Zinkan presented plans May 22 to the Broad Ripple Village Association’s land use and development committee and is slated to return in either June or July to seek a favorable recommendation. The project then would progress to the city’s Metropolitan Development Commission, and construction could begin in the spring, Zinkan said. 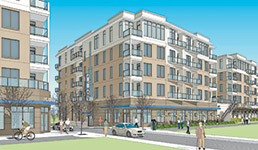 “It can revitalize that area that’s kind of the gateway to Broad Ripple,” Springer said. “And they’re interested in, of course, the river walk, which we still hope is going to materialize in the next few months.”

The trail could start at 6311 Westfield Blvd., where Todd Morris demolished a three-story office building to make way for a six-story building with 105 apartments and 5,000 square feet of street-level retail. Construction on the project has yet to start.

The walk would follow the river east, past the Monon and behind the property where Zinkan wants to build the apartment project, and into the park. The property directly west of it, where Weaver’s Lawn & Garden Shop operates, is owned by Bryan Chandler.

Chandler, a Broad Ripple real estate broker, bought the sliver of land in early 2014 from children of the nursery’s founders, with the intent of holding it to accommodate the walk.

He’s receiving interest from both private and philanthropic groups, he said.

“I bought it as a placeholder for that,” Chandler said of the river walk. “That’s my primary interest. I live in the neighborhood. I’m a runner; I believe in trails.”

Zinkan’s proposal is just the latest in a spate of apartment development to hit Broad Ripple in recent months.

Browning Investments’ Coil opened April 1, bringing to the village 151 apartments ranging in size from 550 square feet to 2,980 square feet. Monthly rents at the development on North College Avenue along the northern edge of the Central Canal range from $950 to $2,500.

J.C. Hart Co. Inc. also is investing in the neighborhood, with plans to spend about $40 million on two projects—one under construction and another in the works.

North of the Coil, the Carmel-based apartment developer is building Park 66 at the northwest corner of East 66th and Ferguson streets. The $17 million, 108-unit project should be ready for the first stage of tenants in mid-August, said John Hart, the company’s CEO.

The four-story building, with a workout center and outdoor patio on the top floor, wraps Opti Park on the south and east sides, providing residents with the feeling that they’re “looking out over Wrigley Field for kids,” Hart said.

J.C. Hart also plans by September to start constructing a $23 million project with 130 units on the Rogers Pools property at 6364 Westfield Blvd. Plans call for demolition of three buildings, which should start in the next month. Two are on the south side of 64th Street and the other on the north side.

Dubbed The Line, in reference to the Hoosier Line train that once traveled the Monon, the project will feature two, four-story buildings that each will include a two-story parking podium.

A proposed five-story development on Broad Ripple Avenue would replace electronic cigarette and pet-grooming businesses that are located there now. (Photo courtesy of Zinkan & Barker Development)

Monthly rents will range from $1,000 to $1,500 with more two-bedroom apartments available than at Park 66, with the expectation that The Line might attract more baby boomers and empty nesters.

Hart is confident that both projects will be successful and is encouraged by the multi-family activity that’s occurring in Broad Ripple.

“By all accounts, the Browning (Coil) project is leasing up strongly, which is encouraging for our property,” he said. “More population in the Broad Ripple area will create more walkability and opportunity for more restaurants and shopping.”

Meanwhile, Morris is seeking $2.4 million in developer-backed bonds from the city for his River House apartment project across Westfield south of the canal, according to Midtown Economic Council documents.

The total cost of the project is about $18 million, Morris said. Preliminary work could begin in July with an expected completion date of late summer 2018.