Home » LOU’S VIEWS: Quasimodo is back; a golem at the Phoenix 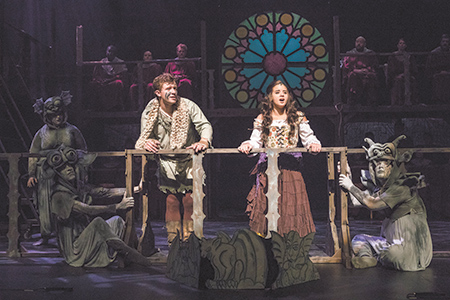 A merciless beating. A hanging. A lustful man of the cloth as the primary villain. A title character who can barely speak, let alone sing.

When Disney announced that it was turning “The Hunchback of Notre Dame” into an animated musical back in the 1990s, there were legitimate questions asked.

Among them: Had anyone at Disney actually read Victor Hugo’s novel? Or, at least, screened any of the live-action film versions?

But, surprise, the movie proved to be a rich one. While taking obvious liberties with the source material—the archdeacon became a judge, talking/singing gargoyles were added, the ending softened, the whipping removed—it still carried more weight than Disney’s average princess tale.

The version being presented onstage as the annual Bobdirex summer musical (through July 9 at Marian University Theatre) lies somewhere between the novel and the animated film, retaining the latter’s songs while also restoring elements of the book’s ending. It also adds narrative elements early on to provide more origin story for Quasimodo, the bell ringer of Notre Dame.

The core remains the same, though. Quasimodo, pious Frollo and hunky Phoebus are all infatuated with the gypsy Esmeralda. She eventually seeks sanctuary at Notre Dame and is protected by the conflicted Quasi.

The smartest decision of the show’s creators was to embrace the cathedral setting as inspiration for the orchestrations. A gloriously powerful (and articulate) choir remains on stage through most of the action, and Music/Vocal Director Trevor Fanning coaxes out of them not just stirring sounds, but also appropriately balanced emotions. They become witnesses to the action, providing understated spiritual weight to the entire production. The choir alone would be reason to return for a second viewing/listening.

The worst decision made by the show’s adaptors (not the creators of this production) was retaining the trio of gargoyles. It’s no fault of the actors or the valiant costume folks that their scenes drain the gravitas from the emotionally weighty actions happening around them, but less would have been so much more. I found myself imagining the power and empathy that could have come from hearing Quasimodo sharing his heart with stone creatures—as he does in the live-action films—rather than fully mobile ones.

The leads all handle their chores effectively, with Shelbi Berry—a recent Marian graduate—standing out as Esmeralda. Director Bob Harbin wisely and with great faith allows her to stand anchored while delivering “God Help the Outcasts,” and she managed to reveal her character’s youth, wisdom, doubt, faith and humanity without ever getting cloying, handily surpassing Heidi Mollenhauer’s version in the Disney movie. Given the nature of the song, I had to suppress a shouted “Bravo” in the theater.

Meanwhile, another legendary character, the golem, came to life—in a sense—across town at the Phoenix Theatre. 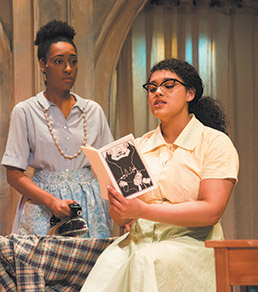 It’s tough for a musical that doesn’t have a Broadway pedigree to get attention out here in the provinces. And that’s a shame, because “The Golem of Havana” scales nicely to the Phoenix mainstage. I wouldn’t want to see it any bigger.

It tells the story of Rebecca, a young Jewish woman who has immigrated to Havana on the brink of the Cuban revolution. Her father attempts to get his tailoring business off the ground, her mother is fiercely bitter after losing her sister to the Nazis, and Rebecca deals with her problems through the creation of comic books about a golem, the clay creature from Jewish folklore.

A five-piece band immediately sets the tone with a mix of infectious klezmer and Cuban music (score by Salomon Lerner with lyrics by Len Schiff), but it takes a few scenes of setup for Michel Hausmann’s script to reveal the core conflict. The show kicks into a higher gear with a lovely sequence of shared prayer between Rebecca (Lydia Burke) and her family’s maid, Maria (Teneh B.C. Karimu). Maria, it turns out, has a son who has embraced the revolution. And his return sets off action that echoes the family’s escape from Europe. The show never loses its warmth but also doesn’t shy away from the serious question: What do you do when the revolution/golem you created becomes a threat itself?

It is a shame that smart new musicals not based on Hollywood movies are seen as theatrical risks. Ditto for plays populated by people of different cultures. The entertaining and thoughtful “The Golem of Havana” showcases the value of theaters—and audiences—taking such risks and embracing work that doesn’t arrive pre-experienced.