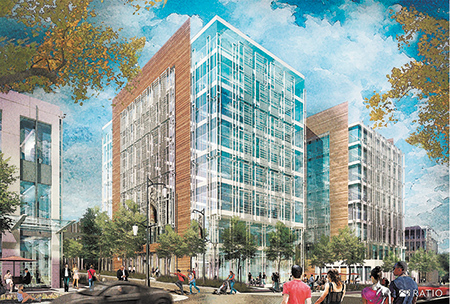 The third time turned out to be the charm for Ambrose Property Group in its quest to redevelop the former General Motors stamping-plant site.

Selected in May, after first pursuing the 103-acre parcel four years ago, locally based Ambrose is proposing a massive $550 million mixed-use project that would transform downtown’s western edge from afterthought to urban gem.

“We’ve been interested since Day One,” Ambrose President Aasif Bade said. “We’re committed to doing a world-class project that the city can be proud of.” 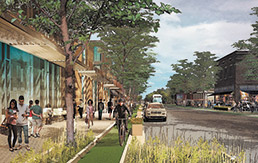 Plans from Ambrose call for 2.7 million square feet of development, including 250 apartments in the first phase, office and retail space, a hotel, and public green space. The entire project is expected to take 15 years to complete, with 535,000 square feet of mixed-use construction in the first five years.

Many details in the initial stages have yet to be ironed out. But Bade and others involved in the project shared with IBJ their broad visions and how they might tackle such a huge undertaking.

It’s not every day that such a large parcel is available for redevelopment within a major city.

“There’s a lot to sort out there,” said Bill Browne, president of Ratio Architects Inc., the architect on the project. “You don’t just grab 100 acres near downtown and have a strategy that unfolds quickly.”

Nestled between the White River to the east and Harding Street to the west, and bounded by Washington Street to the north and Oliver Avenue and The Valley neighborhood to the south, the site serves as a blank canvas.

(Rendering courtesy of city of Indianapolis)

Chevrolet plant—remain, but only in the form of its cement slab that Browne estimated stretches for several acres and a small portion of the original steel frame.

Whether the 12-inch-thick floor is removed or incorporated somehow into the redevelopment remains unknown. But what’s more certain is the role Ambrose will play in the project. 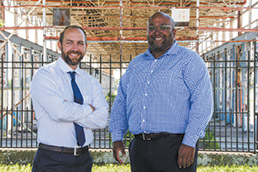 Patrick Chittenden, left, and Aasif Bade met at Indiana University and in 2008 launched Ambrose, which will serve as master developer for the former GM site. (IBJ photo/Daniel Axler)

Bade and Ambrose Executive Vice President Patrick Chittenden foresee Ambrose’s serving as “master developer” and leading land and perhaps some office development while bringing others aboard to handle other facets.

“We are not in the apartment-development world; that’s not our expertise, so we will not be doing any apartment development ourselves,” Chittenden said.

The two said they’re pleased with the amount of interest they’ve received from other developers, though they’ve yet to have detailed discussions. Ambrose has the land under contract and hopes to close by the end of the year, with construction starting sometime in 2018.

Financing for such a large project is not a concern, they said.

“That is not the holdup whatsoever,” Bade said. “It’s an incredible undertaking to close on a site with such a long-standing owner and all the complexities related to it.”

Rising above the rest

Besides Ambrose, three other developers bid on the property. Bruce Rasher, Michigan-based RACER’s development manager, declined to divulge the names—or the price Ambrose has agreed to pay for the property, citing confidentiality agreements.

But Rasher said Ambrose clearly separated itself from its competitors.

Ambrose first vied for the property in 2013, when RACER initially called for proposals. The firm lost out when the city and RACER selected the site for then-Mayor Greg Ballard’s planned $500 million criminal justice center that would occupy the western portion. For the eastern half, RACER selected Carmel-based developer REI Investments’ plans for an outdoor concert venue.

But the criminal justice project unraveled in 2015 amid City-County Council opposition, prompting a second solicitation for offers to redevelop half the site. The entire property became available in June 2016 when RACER terminated its contract with REI because the firm couldn’t secure financing.

That opened the site to yet another round of proposals, with Ambrose prevailing. City-County Councilor Jeff Miller, whose district includes the stamping-plant site, is confident Ambrose is up to the challenge.

“I’ve only heard good things about the other projects they’ve done,” he said. “That they got vetted through the process gives me great confidence in them.”

Bade and Chittenden—roommates at Indiana University—launched Ambrose in 2008 as a full-service real estate firm and four years later acquired the downtown 16-story Circle Tower, where the company has its headquarters. Ambrose sold Circle Tower in January to Chicago-based Level Office.

Ambrose hired Ratio Architects as designer on the GM site project. The local firm, led by Browne, also is involved in another high-profile downtown project—Hendricks Commercial Properties’ Bottleworks development proposed for the site of the former Coca-Cola bottling plant. 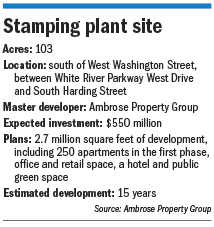 “When you stand on this property and you look back to the east and you see downtown and the river, it has a character that is unique,” Browne said. “There’s an opportunity to engage with the water. Whether that’s with any kind of retail or recreational activity, I don’t know yet for sure.”

With such a big site, challenges abound. Among them: infrastructure and road placement, storm-water management, utilities, and figuring out pedestrian access from downtown.

“You have more of a blank slate that you begin with,” Browne said. “It’s not often that you have that kind of opportunity in an urban environment.”

The rectangular shape of the site suggests plotting the project via a grid system, emulating traditional city blocks, and sizing them for planning and development might make the most sense, he said.

To help spur construction, the city is prepared to extend the Cultural Trail’s Capitol Avenue leg west on South Street past Lucas Oil Stadium. And South Street ultimately would be lengthened to extend over the river and connect with the development through other road improvements.

The aim is to create a neighborhood in an area that for decades has been cut off from the core largely because the river acts as a barrier, instead of a catalyst, for development.

Residents of The Valley, the working-class neighborhood to the south that once relied on the GM jobs, hope they, too, will benefit from a rebirth.

“The location of the property and the location of our neighborhood is ripe for everything that is going on now,” said Jay Napoleon, who leads the neighborhood association with his wife, Rahnae. “People want to be downtown. If you want a neighborhood feel, we can offer that here, too.”•