An area on the east side of the city that encompasses what’s known as the Promise Zone has achieved a major milestone—eclipsing $100 million in leveraged federal assistance since its formation.

The Indianapolis zone has a population of more than 17,000, with almost half living in poverty and a quarter unemployed. The John H. Boner Community Center is the lead organization for the effort and is overwhelmed by the high amount of federal financial support.

“It’s the biggest accomplishment we’ve achieved over the last two-and-a-half years,” said Jon Berg, director of the Indy East Promise Zone. “When you think about the city and the state, we are characteristically lower on the ability to secure federal funds.” 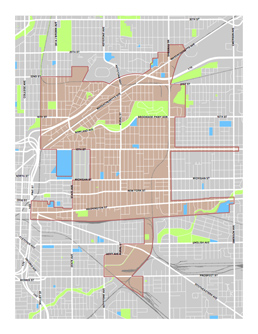 The sector was designated in April 2015 as one of eight areas to participate in the Promise Zone program for revitalizing high-poverty communities. The eight included six metropolitan areas, one rural region and one tribal community. (Click on map at right for larger view of the east-side zone.)

The designation gives impoverished areas of the communities a leg up in obtaining federal assistance. That essentially means the Promise Zone regions  receive preferential access for grant applications, technical assistance and other help from about a dozen federal agencies and their programs.

On the east side, nearly $120 million has been awarded in grant money to 27 different organizations from 11 federal agencies. Among the recipients: United Way of Central Indiana, King Park Development Corp., the RecycleForce not-for-profit, and city of Indianapolis.

The city has received the biggest chunk: $55 million in the form of New Markets Tax Credits. The award from the U.S. Department of Treasury is from the same fund that in 2010 supported the development of the Avondale Meadows YMCA and the Ivy Tech Culinary School and Conference Center.

A portion of the new round of tax credits likely will be used to help TWG Development LLC finance its $36.8 million redevelopment of Ford Motor Co.’s vacated East Washington Street assembly plant.

Plans for the four-story, 200,000-square-foot structure call for 132 apartment units, with 12 on the first floor and the rest above. More than half, or 51 percent of the units, will be priced at affordable rates—a piece of the project the city deems critical for the area.

Also, the United Way will receive $7 million over three years for its Great Families 2020 initiative. United Way will match the grant, adding another $7 million to the total, and the sub-recipients of the grant are expected to contribute $6.6 million. The total of $20.6 million will be used to address family instability by providing services to at least 1,000 families living on the city’s west side, northwest/midtown area, near-east side and far-east side.

“We wouldn’t exist without it, or we certainly wouldn’t look the way we look,” RecycleForce CEO Gregg Keesling said.

The not-for-profit employs 60 at its center in the Circle City Industrial Complex on the city’s near-east side, and another 40 at other locations.