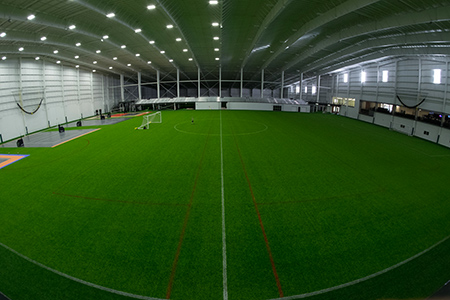 The city of Westfield has quietly purchased the Grand Park Events Center from South Bend developer Holladay Properties, but the action remained largely unnoticed even as the city’s made its first loan payment.

According to documents recently obtained by IBJ, the city last November closed on the deal to acquire the 370,000-square-foot indoor soccer arena within the nearly 400-acre Grand Park Sports Campus for $557,108.

The deal also bound the city to a $26.65 million loan Holladay obtained to finance the center’s construction. On July 10, the city made its first payment of nearly $900,000 on the loan.

Now, officials say the ownership change will save the city millions of dollars over the next 20-plus years because loan payments will cost less than the lease payments Westfield was making to Holladay to use the building.

But back in November, officials said nothing publicly about the move. And the Westfield City Council made the decision to pay for the building with no public debate and without delineating it on an official agenda.

Officials say those moves weren’t necessary because the possibility had been discussed years before, during council meetings that talked about the lease.

Until November, the city had been leasing the event center from Holladay, which used those payments to pay for its construction loan. Westfield’s obligations under the lease started at $2 million annually for the first five years and gradually increased.

The lease, which the council approved in October 2014, was structured to last 25 years and could have cost the city a total of $53 million.

But the agreement included a buyout option for the city: Pay Holladay $485,000, assume full responsibility for the remaining debt, and pay associated fees.

Local officials decided to invoke that option in November—transferring control of the Grand Park Events Center and its $26.65 million note to the city. The decision means the city is on the hook to make annual payments of about $1.8 million for 25 years—a total of $45 million.

The deal appears to save the $7.65 million over 25 years, based on a comparison of the lease to the current loan structure.

City officials, however, say that underestimates the impact of the change. They say the savings should reach $17.63 million because the original loan obtained by Holladay included escalators in four different years. The city’s obligation on the loan is fixed.

But the city does not appear to have been on the hook for those escalators, because its responsibility was only for the lease payments it had agreed to make to Holladay.

Regardless of the amount, no one from the city is advertising the deal.

Neither councilors nor city officials discussed the purchase of the facility at any public meeting. Instead, the $557,108 payment was listed on page 24 of a 32-page claims docket the Westfield City Council approved Dec. 12.

That claims sheet does not make clear the funds are being used to buy the events center or to assume responsibility for its $26.65 million loan.

Westfield spokeswoman Erin Murphy repeatedly referred questions about the deal to Brian Zaiger, an attorney with Krieg DeVault LLP who works for the city on contract.

Zaiger refused to answer a majority of questions from IBJ on the record but did confirm the city has bought out Holladay.

“The net result is, instead of leasing the property from Holladay, we are paying the primary debt service,” he said. “Holladay is not involved any longer.”

Zaiger implied that the change in financial responsibility isn’t significant because the city was essentially making the debt payments, anyway, through its lease. The difference is that Holladay is no longer involved, he said, which saves the city money.

IBJ repeatedly requested to speak to someone in Mayor Andy Cook’s administration—or the mayor himself—about the issues but the city referred questions to Zaiger. It did eventually release a statement to IBJ on Aug. 30.

“The city did not assume additional debt by transferring ownership of the Grand Park Events Center to the City Council. The master lease document was a contract that the city was to maintain the set lease payments over the life of the mortgage,” the statement read in part. “The master lease was discussed at public meetings starting October 2014. This is a public document that is available to residents.”

‘Letter of the law’

But Joshua Claybourn, an attorney specializing in municipal finance in the Evansville office of law firm Jackson Kelly, said that, even with a buyout provision in the original lease agreement, the council would need to approve the purchase by passing an ordinance at a public meeting. Claybourn also said taking on the loan would require separate approval.

Other experts said the city doesn’t appear to have violated the law because the original lease—which was discussed publicly—seems to have given the city permission to take that action. But that doesn’t mean the deal shouldn’t have been discussed publicly, they told IBJ.

Gerry Lanosga, assistant professor at the Indiana University Media School and a member of the board of the Indiana Coalition for Open Government, said the situation raises eyebrows at the very least.

“This is a big decision, but it’s a big decision pursuant to the terms of a lease that was approved in a public setting,” Lanosga said. “By the letter of the law, they’re all right. But their unwillingness to talk about it raises some suspicion.”

“Even if it’s legal, on a project this major and the city being less than 10 years old, it would have been a good move to have a press conference with the mayor … or some sort of statement of intent,” Helmke said. “It’s frustrating to see these kinds of things.”

And both agreed city residents deserve more open discussion. “The bottom line is, this is the public’s money,” Helmke said. “The public generally has the right to know where their money is going.”

Chuck Lehman, who served as Westfield City Council president in 2016, said the decision to buy the facility had been discussed publicly for years so it didn’t need to be brought up again at the time of purchase.

But Lehman said he couldn’t specify when he learned the decision to buy the property had actually been finalized.

“There’s just so many discussions, I couldn’t pinpoint any one date,” he said.

The agreement to transfer the loan, the sales disclosure form and closing document are all signed by Lehman, who described the transaction as a “formality.” The statement from the city said Lehman signed the documents because “the City Council owns the Grand Park Events Center.”

No TIF money yet

The city made its first loan payment on the events center using money from reserve funds, not from rent collected through subleases at the center or from tax-increment financing revenue. In fact, none of the debt associated with Grand Park has been paid using TIF dollars, even though city officials originally pitched the park as an economic development project that would spur revenue to help pay for the debt.

The money to buy out Holladay and the July loan payment came from a supplemental reserve fund. So far, the rest of Grand Park’s debt is backed by local income tax revenue.

The city used three short-term bond-anticipation notes that it issued from 2011-2013 to finance park construction. Those notes, which totaled $44 million, were backed by local income tax revenue and used as a way to delay the need for long-term financing for five years.

In August 2016, the city refinanced two of the bond anticipation notes with a 24-year, $32 million bond backed by income taxes. That paid off the two notes worth $19 million and included $13 million in additional money for land acquisition at Grand Park. At that time, Westfield Chief of Staff Todd Burtron said the TIF district should be generating enough revenue by 2020 to start paying for the debt.

Now the city is considering a refinancing package for its last outstanding bond anticipation note, which was initially issued for $25 million. The proposed 25-year bond could be issued for an amount up to $27 million—which would also be backed by income tax revenue.

At a Westfield Redevelopment Commission meeting on Aug. 28, the city’s director of enterprise development, John Rogers, said it will be five or six more years before TIF revenue can cover the debt obligations.

Lehman, who is now City Council vice president, said he’s not concerned that TIF revenue cannot yet cover the debt.

“I don’t get a headache,” he said. “The entire concept, the entire pro forma, the entire operations, I just think are above and beyond where we thought we would be.”

But at least some residents are getting restless and expressed frustration at an RDC public hearing on the bonds.

“Has the city been telling the truth to the residents of this community?” said resident Ray Schneider. “This was supposed to be financed by TIF monies.”•