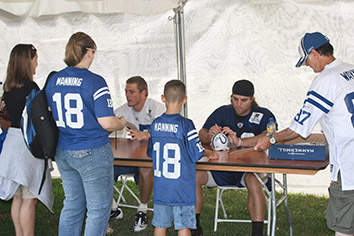 The Indianapolis Colts and the city of Westfield announced a partnership Wednesday that will make Grand Park Sports Campus the official home of Colts training camp for the next 10 years, beginning in July 2018.

Word of the training camp's move to Westfield leaked out Tuesday night, but further details were added by the NFL team and city officials at a morning press conference at the Grand Park Events Center.

“When Grand Park opened three years ago it was meant to be the gem of youth sports,” Westfield Mayor Andy Cook said in written comments before the press conference. “This partnership to be the official home of the Indianapolis Colts training camp goes well beyond youth sports. To have an NFL team committed to Grand Park for a decade proves that our facility is not only a premiere venue for youth sports, but also for professional athletes.”

“Holding training camp at Grand Park will give our team a chance to practice at a top-notch facility in addition to giving us the chance to connect with our fans as we prepare for the season,” Colts General Manager Chris Ballard said in written remarks. “The venue is located in ideal proximity to our fan base and we feel this is an advantageous move for the Indianapolis Colts.”

Colts training camp participants are expected to stay at the nearby 152-room Cambria Hotel & Suites Westfield, which is expected to open in Grand Park Village in November.

Westfield officials have been talking to Colts executives about moving the training camp to Grand Park for more than a year. Documents that IBJ obtained last year about a failed hotel project at the park showed a major user was interested in securing a long-term agreement at the park if lodging could be provided on-site. The documents indicated the interested party was the Colts.

But with no lodging yet available, the Colts held camp at its practice facility on the northwest side of Indianapolis.

The Indiana Farm Bureau Football Center, 7001 W. 56th St., does not contain seating for spectators, so practices were closed to the public. The team added a pair of open practices at Warren Central High School and Lucas Oil Stadium for the general public.

Colts officials said they expect to see a significant rise in the economic impact of the camp with the new location because of the proximity to its fan base.

Colts officials said they plan to conduct most of the camp on the outdoor fields but like the option of being able to move them inside during inclement weather into a facility where the public can still view the players.