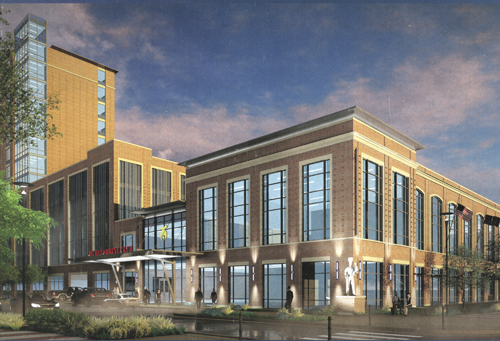 The group that owns the landmark Old National Centre entertainment and hospitality venue in downtown Indianapolis is considering selling the property to a local developer, which in turn would build it a new headquarters on the same site as part of a larger hotel project.

The latest bid marks the second time in three years that the Murat Temple Association has fielded an offer for the property at 502 N. New Jersey St.—this one from Browning Investments, according to a local real estate source with knowledge of the offer.

“We explore any options,” he told IBJ. “Someone approached us. There’s nothing at this point.”

The latest offer, which Borton highlights in the September issue of the Murat magazine, follows an agreement the organization had reached with Live Nation in late 2014 to buy the Murat Shrine Temple site. But most of the 300 members voted the following September to reject the contract.

Borton writes in the magazine that a developer, presumably Browning, would buy the property and build a two-story, 40,000-square-foot headquarters for the association at the corner of North and Alabama streets.

Borton makes no mention of the hotel but says the project would provide five times the number of parking spaces the organization currently has, suggesting a parking garage could be involved.

A conceptual rendering of the project graces the cover of the magazine and depicts a high-rise building in the background—presumably the hotel—accompanied by the caption: “Is this our new home?”

The temple, which is in one of the city’s 17 historic districts, would remain as part of any redevelopment of the property.

“This is an exciting opportunity for all of us at Murat, and we look forward to finalizing our plans for the future,” Borton wrote. “A final decision will be made in the next few weeks.”

The 130,379-square-foot Murat building and land are assessed at a total value of $6.4 million, according to Marion County assessor records.

Live Nation operates the 2,600-seat Murat Theater, the multipurpose Egyptian Room and other venues in the building, which sits where East Michigan and North New Jersey streets intersect with Massachusetts Avenue.

Built in 1909, the temple the largest Shrine temple in the country and is named for the Frenchman Joachim Murat, who was one of Napoleon’s generals in his Egyptian campaign. It was designed by Oscar Bohlen of D.A. Bohlen & Son, the architectural firm responsible for many of the city's most famous buildings.

Its architecture is based on Islamic temples found in the Middle East and Egypt. Features of the building include stained-glass windows, terra cotta trim, minarets, and brown and yellow brick banding.

The Egyptian-themed auditorium, added as part of the 1922 expansion, had been planned before the discovery of Tutankhamun’s tomb, which coincided with the opening of the auditorium, according to the temple’s history.