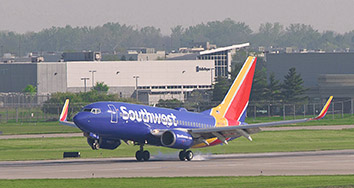 The final day of nonstop service on this route will be Nov. 4, said Southwest spokesman Dan Landson.

Southwest established the route about three years ago but has decided to drop it because the service wasn’t attracting enough passengers, Landson said.

“We are constantly monitoring local traffic demands and adjusting our schedule to fit the needs of the local traveler. Reagan National is a market where we tried making the route successful but ultimately we did not see the sustained traffic needed to make the route successful over the long term,” Landson told IBJ via e-mail.

“We tried a variety of things to generate demand, adjusting the timing on the flights, but ultimately did not see the traffic to sustain the IND-DCA market,” he said.

All of those other routes are still running with the exception of the Akron-Canton flights, Landson said. Those ended in June.

“The Indianapolis International Airport has 10 daily, nonstop departures out of Indy to the Washington, D.C. area, even without the Southwest flight in question," airport spokeswoman Stephanie McFarland told IBJ in an email. "Currently, American and United both offer daily flights from Indy to the D.C. area, which provides daily capacity that meets or exceeds passenger demand.”