Gov. Eric Holcomb wants to boost Indiana’s tech sector with a tweak to state tax law that will benefit software firms and their customers but reduce state revenue as much as $10 million a year.

Holcomb will ask lawmakers to exempt cloud- or subscription-based software—often called software as a service—from Indiana’s 7 percent sales tax. The move would save money for nearly every company in the state and could bolster local firms that sell SaaS.

The issue has cropped up nationwide as archaic tax codes have clashed with the advent of cloud-based computing, which has changed the way products are sold and delivered.

But advocates of the change say it’s about more than just tax policy—it’s about signaling to the burgeoning software industry that Indiana understands and respects the way it does business.

“We want to make a statement that Indiana is a place of competitive advantage for tech companies,” said Mike Langellier, president and CEO of TechPoint, an advocacy group that promotes Indiana’s tech industry.

“The intent and message that’s being sent by this” is important, he said.

In the past, most tech firms sold software to customers on a compact disc at places like Best Buy, where buyers paid a sales tax—just as they did on a camera, a book or a washing machine. The purchase entitled a customer to a license or single version of that software, which was permanently theirs to use, maintain and store on their computer or server.

Now, the software-as-a-service industry—which includes big companies like Salesforce and smaller firms like Doxly—increasingly sells subscriptions to web-based software instead of selling physical products. The company maintains and continually updates the product, fixes bugs, and hosts the software on remote servers.

Sometimes, software is provided through a hybrid model. Customers download it onto their computer but it’s maintained through subscription. If the customer doesn’t pay, the software stops working.

“We went from a place when things were consumed in physical products, where you would go buy a product off the shelf of a retail store and you took it home and you owned it,” Langellier said. “You had explicit control over it.

That shifting reality has changed the taxation game. “It’s like pinning Jell-O,” Langellier said. “Where do you try to apply taxability?”

In Indiana—and most states—the conundrum is a headache because physical products, like tangible discs, are taxed. Services like dry cleaning and haircuts are not.

Is software still a product to be taxed? Or now a service that is exempt?

In 2016, the Indiana Department of Revenue said cloud-based or subscription-based software “may or may not be subject to tax.” The department’s ruling established an eight-factor test to determine whether companies should collect the sales tax.

It depends “on the facts and circumstances of each transaction,” taking into account how much control the purchaser gains over the software and the ownership rights, wrote Chris Atkins, then the Revenue Department commissioner.
Streamlined test

Now, Holcomb’s team wants the Legislature to change the tax code to create a “one-factor test” that will make clear that software-as-a-service firms don’t need to collect and remit sales taxes, said Micah Vincent, director of the Indiana Office of Management and Budget.

That factor would be “simply whether the services are delivered over the internet,” said Justin McAdam, the OMB’s general counsel.

“There is a lack of clarity in our tax code on this,” Vincent said. “It’s an issue we’ve found to be important to our tech sector. The ability to go from being categorized as a ‘yes’ taxation state to a non-taxation state is pretty important.”

But the Holcomb administration says it can’t act alone; it needs legislative help to clearly exempt software delivered over the internet.

The Governor’s Office has support from Senate Tax Chairman Brandt Hershman, R-Buck Creek, who said “we often find it necessary to update our tax code on the basis of changes in our economy.”

If Holcomb’s plan becomes law, Indiana would become the fourth state in the country to explicitly exempt software as a service from taxation, joining Idaho, Colorado and Vermont.

Even absent explicit laws, however, most states have decided through rules—or sometimes through silence—not to collect sales taxes on software sold as a service.

But even then, he said, “there was still a lack of guidance with regard to transactions that didn’t involve the traditional licensing of software.” So the Department of Revenue released updated guidance on the matter in 2016, and “a lot of folks, when they first saw the revision, thought this was a substantial change in policy by the state where they’ve now had to do this facts-and-circumstances test.”

Ralston said the governor’s proposal “sounds more like a pretty straightforward test, which says software as a service is generally not going to be taxable outside extraordinary circumstances.” 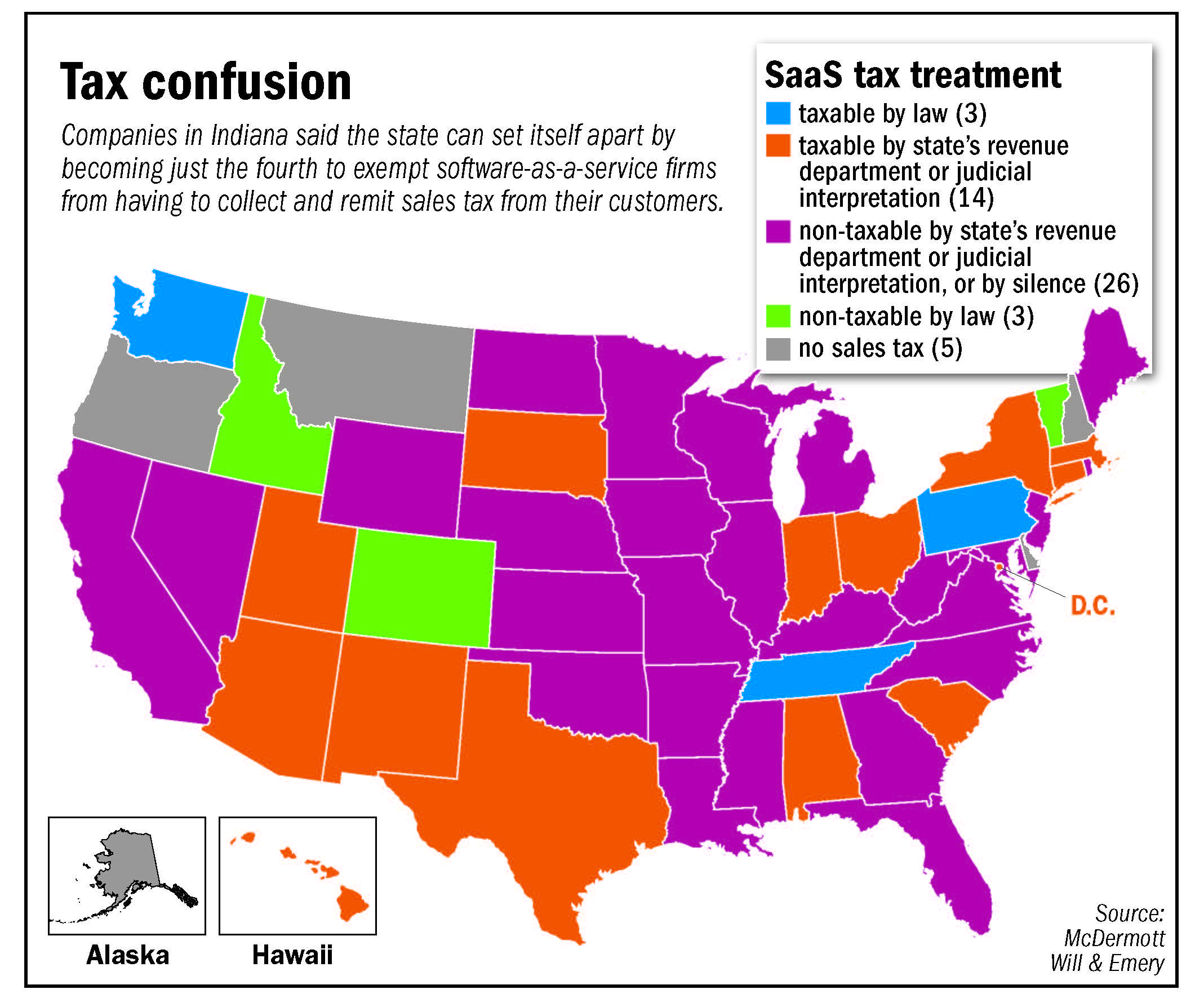 “I don’t think there is going to be too much pushback,” he said. “Conceptually, going to a position where you only have to look at if it is being delivered electronically, it is probably going to be considered favorable both to consumers and vendors of those services.”

Christopher Day, co-founder and CEO of Carmel-based DemandJump Inc., said the sector wants “clarity and parity.” He said many nearby states—including Illinois, Michigan and Kentucky—don’t charge sales tax on software as a service, but only because of the interpretation of existing tax code or silence in the law.

“It is confusing and causing a lot of unnecessary expenses and consternation with accountants and lawyers,” Day said.

“Let’s not be different than our surrounding states,” he said. “Let’s not create an issue where we’re less competitive in the marketplace.”

“If there’s a company here in Indiana [that doesn’t charge tax] and one in another state that does charge tax, that becomes a real issue in the decision-buying process,” he said. “If one is going to cost me as a consumer an extra 5, 7 or 10 percent, that’s a real factor in my decision.”

“I continue to support getting to a clear stance and hopefully a good outcome,” Byers said. “Ultimately, when you sell a car or device, someone takes possession of that and they have it forever. Yes, we’re giving you a piece of software, but we’re continually updating it, making it better, and helping implement it.”

“Right now, there is confusion and inconsistency regarding the state’s tax treatment of these services,” Brinegar said. “Having clarity on the exemption would help to grow Indiana’s software-developer economy.” 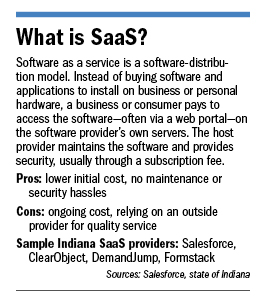 Explicitly exempting software-as-a-service firms from collecting sales tax on their products could cost the state $5 million to $10 million a year in lost revenue, Vincent said.

But the state is already losing out, he said, because most companies aren’t paying the tax due to their interpretations of the eight-factor test.

Even if Indiana does exempt cloud- and subscription-based software from the sales tax, though, the decision would apply only to purchases by Indiana customers. Other states could try to require Indiana software firms to collect the tax from buyers in their states.

“Ultimately, it is a state-by-state thing,” Byers said. “They look at a series of factors, [including] how much business you are doing in the state. Once you get over that threshold, they’re going to pay attention to you. Ultimately, there will be a day we need to pay sales tax in one state and not in another.”

Still, the laws and rules are murky enough that setting a precedent in Indiana means some companies based here will likely decide not to collect the tax, which could leave the burden on the customer to report the purchase and pay the tax when it applies.

And popular opinion is on the side of exempting the software from taxation. Tech leaders point to Colorado, where Gov. John Hickenlooper in 2011 repealed a tax on non-packaged software after just one year because of backlash.

“There was an absolute revolt in the state,” Day said. “They ended up having to repeal it.”•