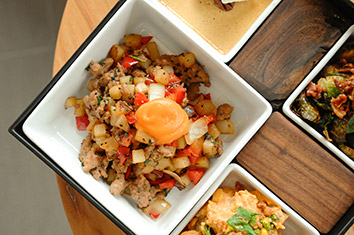 The Cerulean restaurant in The Alexander hotel at CityWay is closing on Dec. 31, owner Caleb France announced Friday.

Its lease expires on Jan. 1 and, after five years at the location on the southeast side of downtown, France and chef Alan Sternberg have decided to shut its doors.

“Alan and I want to thank our team and diners, who have become part of our extended family, and for the great memories over the past five years,” France said in a press release. “We look forward to continuing to serve our guests far into the future.”

One of the highest-rated fine-dining establishments in the city, the Asian-inspired Cerulean will maintain normal business hours through December: Monday through Thursday, 5 p.m. to 9p.m.; and Friday and Saturday, 5 p.m. to 10 p.m.

The “ingredient-driven, fine-dining establishment opened in 2012 at CityWay, at the northeast corner of Delaware and South streets. IBJ dining critic Lou Harry gave Cerulean a rave review for its cuisine and decor.

"With a format that encourages experimentation and an atmosphere that feels like nothing else locally, Cerulean gives Indianapolis another destination restaurant to enjoy and proudly show off to visitors," Harry wrote.

Locally based Buckingham Cos. developed the mixed-used project that also includes apartments and ground-level retail space. A spokeswoman for Buckingham didn’t immediately return a call seeking comment on Cerulean’s closing.

In a video posted on Cerulean’s Facebook page, France said it has been “really great” to be a part of the city during the past five years.

In 2016, Sternberg was a James Beard award semi-finalist recognizing rising-star chefs across the country. The award is given to "a chef age 30 or younger who displays an impressive talent and who is likely to make a significant impact on the industry."

Cerulean’s dinner menu includes pasta, steaks and seafood, in addition to duck breast and pork tenderloin, priced from $13 to $38 a plate.