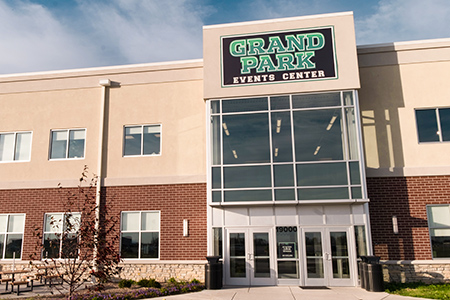 Sue and Chris Estep, owners of RoundTripper Baseball Academy in Westfield, say they met with Mayor Andy Cook to discuss the possibility of relocating to Grand Park. The discussions took place before the city issued a request for proposals for development of land at the nearly 400-acre youth sports complex.

Westfield issued the RFP in July, seeking plans for the 5.3-acre lot immediately west of the Grand Park Events Center. But the Esteps said they only recently found out about the RFP, after failing to see notices published in two newspapers.

Instead, Pro X Athlete Development, a multi-sport training facility that former Major League Baseball player Joe Thatcher opened this year in Westfield, was the only company to respond to the RFP.

Thatcher, 36, is Cook’s nephew—the son of his sister, Sara Thatcher.

Pro X, which is working with EdgeRock Development on the project, has proposed investing up to $6 million to construct a 65,000-square-foot building that would feature open turf, a weight room, batting cages, a golf simulator and a viewing mezzanine.

Officials say no public dollars are involved with the project, except that Westfield will continue to own the property and collect lease payments from Pro X.

The city has not formally accepted the proposal from Pro X, but the company is moving forward with a request for a zoning amendment.

Cook declined to talk directly with IBJ, saying through a spokesperson that he thought he would be misrepresented in the story. However, the spokesperson said by email that the mayor recused himself from the process and has not been involved in the negotiations.

Last winter, Carmel-based Northern Commercial contacted the Esteps about the possibility of selling their 10.5-acre property in the Southpark Business Park, about two miles south of Grand Park.

The offer caught them by surprise. RoundTripper Baseball Academy, which has been in operation for 25 years, has been on that property for 16 years.

“We hadn’t been in the market to sell the property for obvious reasons—we have an existing business here that’s full,” Sue Estep said.

Jeffrey Lauer, zoning specialist and real estate adviser for Northern Commercial, said his company saw the potential for the RoundTripper facility to be converted for a manufacturing or distribution operation, and the land where the fields are located could be sold for a similar use.

“If there was an interest in selling, we thought the demand was out there,” Lauer said.

Selling offered an interesting opportunity for the Esteps: They could recoup their investment and reinvest in a new facility at Grand Park, which has 26 baseball and softball diamonds but no indoor facility dedicated to baseball or softball.

“It seemed to make sense to us,” Estep said. “We’re an existing business. We’re 100 percent full. There is no risk to Grand Park with us moving in.”

In late spring, Northern Commercial Managing Director Jess Lawhead, Lauer and the Esteps met with Cook and the city’s director of economic and community development to talk about the options and their potential plans.

“It definitely was not as receptive as what we would have thought with our track record and the amount of clients and the number of kids that we work with,” Estep said.

Lauer, who formerly worked as an associate planner for the city of Westfield, said the meeting was to do some early brainstorming, and the plans were “relatively preliminary.”

“My impression was, it was early on,” Lauer said. “I think [city officials] were generally receptive to what the Esteps were at least interested in doing out there.”

The Esteps continued to work with Northern Commercial, believing they could move to the park and that they would keep working with the city.

“In hindsight, we’re not 100 percent sure if they weren’t already working on a project with his nephew,” Sue Estep said. “I would not have known that at the time.”

In July, the city issued a request for proposals for the property previously designated for a hotel at Grand Park, as those plans had been abandoned months earlier.

The notice was published twice in both The Indianapolis Star and The Times of Noblesville.

It said the city was looking for a facility that would provide athlete training and development, enhance the visitor experience at Grand Park, be complementary to the park and the Events Center, and “best serve the interest of the community, from the standpoint of both human and economic welfare.” It did not specify that the facility needed to be focused on baseball or softball.

According to the RFP, the city would lease the property to an interested devel,oper for at least $6,300 per acre—or $33,390—annually.

Responses were due by Aug. 7. Pro X was the only respondent and the Westfield Redevelopment Commission opened the response Aug. 8.

There are no rules prohibiting the city from entering into a contract with someone related to the mayor. However, under state law and city policy, the mayor would be required to disclose his relationship with Thatcher to the Westfield City Council before the lease is finalized and then afterward to state and county officials.

Estep said the couple had no idea until last month that the RFP had been issued. They were not contacted by anyone at the mayor’s office or the city, despite having proposed an athlete training facility.

“I am not checking the Noblesville paper on a daily basis, nor did I expect I would need to, knowing that we’ve had good relationships with many of the parties involved and had had a conversation with the mayor expecting that when they were ready to move forward, somebody would contact us,” Estep said.

Thatcher answered a call from IBJ but said he was headed to a meeting and would call back. He did not. He also did not answer a follow-up call the next day.

City spokesperson Erin Murphy said the city handled this RFP just like any other.

“The city does not directly recruit bidders, as it puts the businesses and developers who were not contacted at a disadvantage,” Murphy said in an email.

She confirmed that the mayor and other city officials had met with the Esteps “over the years,” but she said they never formally submitted a proposal or followed through with the appropriate filings.

Cynthia Baker, an Indiana University Robert H. McKinney School of Law professor, said the city followed the legal requirements. But she said officials could have gone beyond that by posting the RFP on its website or using social media to advertise it.

“If they only got one response … it seems to me they certainly wouldn’t be prohibited from extending the deadline or re-publishing it again,” said Baker, who specializes in government law.

Sue Estep said she and her husband would like to know more about the deal between Pro X and the city, but those details have not been made public.

The city has not released the proposal Pro X submitted because the two parties are still negotiating terms.

Estep said one of her biggest concerns is the city supporting a similar business in such close proximity to RoundTripper.

“Competition is great. We’ve dealt with competition for 25 years, and we’re up for that challenge,” Estep said. “What I am not OK with—and the taxpayers shouldn’t be OK with—is competition that is not on a fair playing field.”

The Esteps have been meeting with City Council members and reaching out to other city officials who might be involved in an effort to find out more information.

City Council President Jim Ake did not respond to a phone call from IBJ.

“I get the impression that they may not even have all the information on this project right now,” Estep said.

The zoning amendment from Pro X for the new facility was introduced at the City Council’s Nov. 13 meeting. The Westfield Plan Commission discussed the request and had a public hearing at its Dec. 4 meeting.

Sue Estep was the only one to comment during the public hearing.

The zoning request is expected to return to the City Council in January.

“This body does planning and zoning,” Plan Commission member Ginny Kelleher said in response to Estep’s comments at the Dec. 4 meeting.

“It has nothing to do with the finances. … We just get proposals for buildings.”•