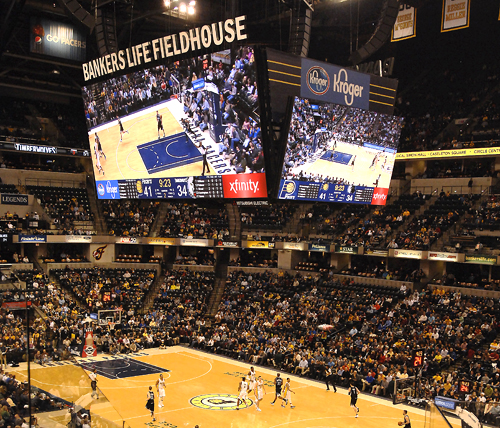 Indianapolis will host the 2021 NBA All-Star Game, a source confirmed to IBJ.

The game is a huge win for the city, economic development officials say.

The Indianapolis game will be held at the 18,165-seat Bankers Life Fieldhouse. Officials involved with the bid also had considered Lucas Oil Stadium, which seats more than 70,000.

The ancillary events—such as the celebrity game, D-League All-Star Game and slam dunk and three-point shooting contests—will be held in Lucas Oil Stadium, which will use the half-stadium configuration that NCAA regional games have used in the past. It typically can seat up to 45,000 spectators.

The NBA All-Star Game was held one other time in Indianapolis, at the RCA Dome in 1985.

In addition to the globally televised All-Star Game, there are numerous glitzy parties—some black tie—over the weekend in the host city.

Indiana Sports Corp. President Ryan Vaughn told IBJ this spring that the All-Star Game would likely require 3,000 volunteers—similar to the number needed for an NCAA men’s Final Four—and would require forming a local organizing committee two to three years out.