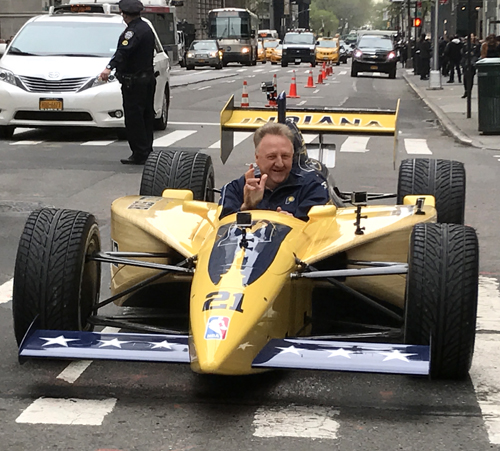 EDITOR'S NOTE: IBJ first published this story Friday. The story has been updated to include a photo of Larry Bird driving the IndyCar in New York on Monday.

The Indiana Pacers and Indianapolis are accelerating efforts to bring the NBA All-Star Game to Indianapolis in 2021.

At 2 p.m. Monday, Pacers President of Basketball Operations Larry Bird is scheduled to deliver the city’s bid to host the 2021 NBA All-Star Game weekend to NBA executives in New York City in a specially-themed and retrofitted IndyCar.

It should be quite a sight to see the 6-foot-9 Bird, a former NBA All-Star and league MVP, in the tight quarters of an IndyCar cockpit.

The bid delivery is being billed by NBA officials as a first-of-its-kind event. Typically, cities are much more low-key about submitting bids for events such as the Super Bowl or NBA All-Star Game, with most merely submitting a binder of pertinent information either by courier or team official.

Sources familiar with the NBA All-Star Game bidding process said no other team or city has made such a display of delivering the bid to the league’s headquarters.

Sources familiar with Indianapolis’ efforts to host the All-Star Game said the goal is not only to get the attention of local and national media, but also to show NBA Commissioner Adam Silver and his staff how fervent the Pacers and city officials are about hosting the game, which is held each February.

Unlike the Super Bowl, where the league’s team owners vote on the host site, the NBA All-Star Game location is selected in large part by the commissioner and his staff.

The bid effort is being spearheaded by the Pacers and the team’s president, Rick Fuson. The bid was crafted with the help of the Capital Improvement Board, Visit Indy and Indiana Sports Corp., Pacers officials said.

Bird will drive the open-wheel racer down Fifth Avenue in New York City from 55th Street to 51st Street, culminating in the bid delivery. Bird will then address the media afterward at the Armani Exchange at the corner of 51st Street and Fifth Avenue.

Pacers spokesman Bill Benner said the delivery is an attempt “to pull out all stops in pursuit of the game.” He said Pacers officials would not be commenting further on the bid until Monday.

No photos of the car that Bird will be driving down 5th Avenue are being made available until Monday, and Pacers officials declined to give any further description of the car.

One source familiar with the car said it is an open-cockpit, open-wheel race car very much in line with what IndyCar Series drivers race at the Indianapolis 500.

There is no word on who came up with the idea, but it’s likely that Hulman & Co. CEO Mark Miles and Indianapolis Motor Speedway Senior Vice President of Events Alison Melangton were involved in the planning for the bid delivery. Hulman & Co. is the parent company of the Speedway and IndyCar Series.

Fuson has worked closely over the years with Miles and Melangton on the Super Bowl and other projects.

Indianapolis has made its mark with unique and noteworthy bid deliveries.

After failing in 2007 with its bid for the 2011 Super Bowl, Indianapolis made headlines in 2008 by using 32 Indianapolis area school children to deliver bids to for the 2012 Super Bowl to 32 NFL team owners. The city also included special Indiana-centric gifts with the bids for the 2012 and 2018 Super Bowls, including shrimp cocktail from St. Elmo’s Steak House.

There’s good reason the Pacers and local officials are putting on a full-court press to win the NBA’s All-Star Game weekend.

The NBA All-Star Game has evolved dramatically since the only time Indianapolis hosted the event in the Hoosier Dome in 1985. It’s now a three-day extravaganza with many people arriving on the Wednesday or Thursday before Sunday’s All-Star Game.

In addition to the globally televised All-Star Game, there are numerous related events, including three-point and slam-dunk contests and a celebrity game. There are numerous glitzy parties—some black tie—over the weekend in the host city.

Milwaukee, Orlando, Portland, Cleveland, Houston, Sacramento and Detroit are expected to bid for the event in 2020 and/or 2021. In addition to those cities, New Orleans, Houston and Los Angeles are lobbying Silver and his staff to be in a regular rotation of hosts.

There’s good reason for the competition.

If Indianapolis’ bid succeeds, the game, said sources familiar with the city’s bid, would likely be held in Lucas Oil Stadium, which could seat more than 70,000, with the three-point and slam dunk contest and celebrity game being played in the 17,923-seat Bankers Life Fieldhouse.

The bid is considered important enough that lawmakers have been working on new tax incentives related to the hosting the game.

This year’s game was played in New Orleans, with next year’s All-Star weekend in Los Angeles. NBA officials are strongly considering playing the 2019 All-Star Game in Charlotte since changes were made to a North Carolina law that had limited anti-discrimination protections for lesbian, gay and transgender people.