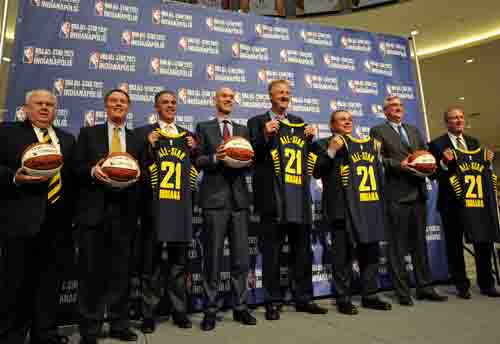 And Fuson promised that team and local officials would “break new ground” doing it and raise the bar for future host cities.

A desire to have the 2021 NBA All-Star Game in a more intimate facility and in the home of the Indiana Pacers led the league and team officials to choose the 18,165-seat Bankers Life Fieldhouse to host the game.

Some of the ancillary events, including the celebrity game and slam dunk contest, will be held in Lucas Oil Stadium, which will be configured to seat about 45,000.

“It wasn’t about choosing Bankers Life Fieldhouse over Lucas Oil Stadium,” Fuson told IBJ following a Wednesday afternoon press conference held before more than 300 people. “Bankers Life Fieldhouse, we think, is the best basketball arena in the country and probably the world. I think we all wanted it in the Pacer home venue.”

NBA Commissioner Adam Silver, who was in town for Wednesday’s announcement and the Pacers game against Oklahoma City, echoed Fuson’s sentiments.

“There was a brief discussion about holding the game" at Lucas Oil Stadium, Silver said Wednesday. “We really are more of an arena sport. We like the intimacy of Bankers Life Fieldhouse. We belong in the arena where the Pacers play.”

Simon said he was “thrilled” with the decision to play the game at Bankers Life Fieldhouse.

The NBA All-Star Game has been played in stadiums and arenas, but recently the NBA has been opting more often to hold the game in arenas built primarily for hoops.

Fuson and Silver said there would be no modifications needed to Bankers Life Fieldhouse especially for the All-Star Game.

But Silver said Pacers officials earlier Wednesday made a presentation about planned improvements to the facility. Silver said he was “impressed.”

“We’re really excited about that,” Silver told IBJ. “They’re going to create more lounges, more fan-friendly areas and areas where people can move around and mingle.”

Though the costs to the Pacers to host the game could be considerable, Fuson said he thinks it’s well worth it, noting the projected economic impact of hosting the event is more than $100 million. Several sources have projected the cost to the team of hosting the event at $10 million over the two- to three-year run up to the game. The city and state will likely incur several million dollars for things like security and traffic control.

“I think if the city gets a return that is 10 times our investment, it’s well worth it,” Fuson said. “That’s a very good investment.”

Fuson called the leadership of the local organizing committee for the 2021 NBA All-Star Game a “dream team.”

Mel Raines, Pacers senior vice president of facilities and operations, will be the president of the local organizing committee, Fuson announced.

Raines joined the Pacers in February 2015 after serving for more than two years as the chief of staff for Rep. Susan Brooks. From September 2009 to May 2012 Raines served as the vice president of event operations for Indianapolis’ ground-breaking 2012 Super Bowl Host Committee.

Fuson and Silver emphasized how much bigger the NBA All-Star Game event is than when the city last hosted the event in 1985.The city and Pacers didn’t even have to bid for the all-star game back in 1985, Simon said.

“In 1985, it was really not a big deal. They gave [the event] to us. We didn’t have to beg them,” Simon said. “Now, it’s become such an important event, we really had to beg [NBA officials]. The difference between 1985 and the week they put on now is so incredible … you’re all in for a great, great week.”

This time around, Fuson said, team officials started the effort to go after the all-star game two years ago, with numerous meetings with city, state, Indiana Sports Corp. and tourism officials over the last year.

The last of the legal details to host the event were being worked out Tuesday, Fuson said. Financial details of the contract were not finished, and Silver said it is not yet known how many tickets the Pacers will get to distribute to their ticket holders and corporate partners.

As much as the NBA All-Star Game and surrounding events has grown in recent years, Fuson made it clear that Pacers and city officials expect to break new ground.