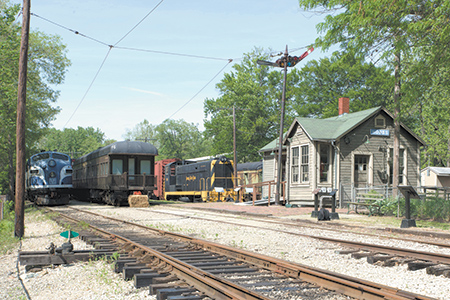 The city of Noblesville is ending its lease agreement with the Indiana Transportation Museum next year, ending a strained relationship after years of fighting.

The city announced at the end of May that it had ordered the museum, which has been located in the city’s Forest Park since the 1960s, to remove hazardous materials and clean up contamination believed to be on the property.

The letter sent to museum officials at that time said the organization was in serious default of the lease agreement, which expires March 1, because chemicals were being improperly stored in damaged, improperly sealed and rusting containers.

And it wasn’t the first time the city has told the museum it needed to improve its appearance at the park. The Noblesville Parks and Recreation Board told museum officials in 2005 and 2008 to clean up its equipment or remove it, and the board provided additional dumpsters to help with the effort.

Despite the ongoing complaint of unsightly conditions, the city says it was unaware of potential contamination until May of this year.

The museum said in May that it was unaware of any environmental issues, but assured that it would cooperate with city and state officials to inspect the property and equipment.

The Indiana Department of Environmental Management visited the park May 31—at the request of the city—to conduct a visual assessment and determined that while cleanup would be necessary, no emergency action was needed.

According to a press release Noblesville issued Wednesday morning, IDEM has made two additional visits since then and the Environmental Protection Agency has completed one inspection. All four found violations.

The city claims that the museum’s leadership “has failed to take public responsibility for its actions and have dragged out the process for clean-up.”

Noblesville’s parks board voted Wednesday morning to not renew the lease agreement with the museum, which means the organization is expected to remove its equipment and return the property to the city in “a clean, sightly, healthful condition, and in good repair” by March 1. But the city says it would work to accommodate the museum if it needed additional time.

ITM President John McNichols said in a media release on Wednesday that the museum learned of the board's decision via email early that morning, and that the group was "profoundly disappointed but not surprised."

McNichols referred to the decision as "another example of the kind of harassment [the museum] has dealt with for the past several years." And he defended the museum's handling of environmental issues.

"We have worked diligently with Noblesville town environmental experts and the Indiana Department of Environmental Management and although there were issues not unlike you’d find in a typical manufacturing environment, the issues certainly never reached the levels of concern as characterized by the early [televised news] reports or the city and county," McNichols said.

Museum officials have options for finding a new home where ITM's mission and tourism appeal would be better appreciated, he said.

The museum is most well-known for annually operating the Indiana State Fair Train and Polar Bear Express rides from Hamilton County to Indianapolis on the Nickel Plate Railroad.

But in March 2016, Hoosier Heritage Port Authority, the quasi-government entity that oversees the 37-mile railroad corridor for Fishers, Noblesville and Hamilton County, terminated its operating agreement with the museum after concerns about the not-for-profit’s financials and maintenance of the tracks.

The State Fair Train has been discontinued, but this year museum started a new route for the Polar Bear Express between Kokomo and Logansport.

The port authority solicited proposals for a new operator for the railroad earlier this year and selected the plan from a new not-for-profit called Nickel Plate Heritage Railroad Inc. that would run excursion trains from Atlanta to south of Cicero, but would not involve the southern end of the railroad.

In the announcement on Wednesday, Noblesville said ending its lease agreement with the museum will allow Nickel Plate Heritage Railroad to extend the excursion trains into Noblesville by 2019.

“With one rail line, there should be just one operator,” Noblesville Mayor John Ditslear said in a prepared statement. “The ITM has not shown good stewardship with the resources entrusted to them for more than fifty years. The city is excited to be working with the Nickel Plate Heritage Railroad to continue the city’s railroad history and bring the trains back to Forest Park as a safe, clean and fun tourist attraction that connects Noblesville with our neighbors in northern Hamilton County.”