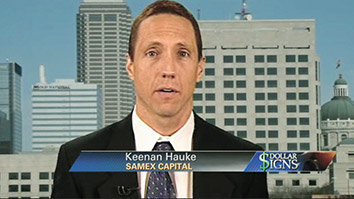 A former Fishers investment manager serving a 10-year prison sentence for securities fraud claims that a prominent Indianapolis attorney engaged in a secret, improper relationship with his wife while representing him.

Keenan Hauke says the actions of Indianapolis defense attorney Larry Mackey, a partner at Barnes & Thornburg, violated legal ethics and prevented him from getting an adequate defense.

Hauke claims that Mackey began a personal relationship with Hauke’s wife, Sarah, while working as his attorney in early 2011, and later married her while Hauke was in prison.

Sarah Mackey spoke to IBJ and repeatedly denied that her relationship with Larry Mackey began while he was representing Hauke. Larry Mackey issued a statement through a spokesman denying Hauke’s claims generally.

Hauke outlined his allegations in a 10-page petition filed in U.S. District Court in Indianapolis on Dec. 3. He is asking a judge to rule that he received ineffective assistance, a move that could re-open his case.

Keenan and Sarah Hauke separated in early 2011, while authorities were investigating financial irregularities at his Samex Capital Partners hedge fund. Sarah Hauke filed for divorce in 2011, and the divorce was finalized that December.

In December 2011, months after Mackey no longer represented him, Keenan Hauke pleaded guilty to one count of securities fraud for masking huge losses that resulted in dozens of investors losing more than $7 million. Then in March 2012, a federal judge sentenced Hauke to 10 years in prison.

Hauke, an inmate at a federal prison in Terre Haute, said he discovered the relationship from email and phone records in 2011, but kept quiet for years for the sake of his three children.

“Mackey’s actions are a blatant case of ineffective assistance of counsel,” Hauke wrote in his petition. “Petitioner depended upon Mackey during the most turbulent period of his life, needed him to negotiate on his behalf and protect petitioner’s interests. Instead, Mackey lied to petitioner, threatened the well-being of petitioner’s children and perpetrated malpractice on a scale the likes of while has rarely been seen in American legal history.”

Larry Mackey, a former federal prosecutor and one of the most prominent white-collar defense lawyers in Indianapolis, declined to comment. His spokesman, Lou Gerig, issued a brief statement: “Mr. Mackey denies the allegations. We trust the courts to fully evaluate these claims as they must any prisoner filing.”

When asked specifically if Mackey had a romantic or sexual relationship with Hauke’s wife while representing him, Gerig responded in an email: “I think we will just go with the previous statement.”

The Indiana Rules of Professional Conduct prohibits lawyers from having sex with clients while representing them, unless the sexual relationship predates the client-lawyer relationship. But the code does not mention sex with a client’s spouse.

Mackey represented Hauke from April through July of 2011. Hauke said in his petition that he fired Mackey a few weeks after discovering the relationship.

Sarah Mackey, in an interview, strongly disputed her ex-husband’s version of events. She said she started dating Mackey in late August 2011, more than a month after he stopped representing Hauke.

Sarah Mackey said her ex-husband’s petition was filled with misstatements and complete fabrications.

In his petition, Hauke said he discovered unsettling clues as early June 2011, when he received his cell phone bill and noticed that Mackey and his wife had exchanged lengthy text messages and telephone calls during May, “often for hours at a time, and usually at one, two and three a.m.”

Hauke wrote that he contacted Mackey, who said the calls and texts were nothing more than Sarah’s concern about her future and what the situation was going to mean for their three boys. Hauke said he “felt he had no other choice than to fully believe Mackey.”

Sarah Mackey denied having such conversations, and said there is no phone bill that shows calls or texts.

Keenan Hauke said about a month later, he noticed his wife’s iPad tablet and picked it up to check something.

“After pressing the button to open the Internet, Sarah’s email popped up, with the highlighted email a message from Mackey to Sarah,” he wrote in the petition. “The email read, ‘Sarah, I love you and I can’t wait to see you in your underwear.’”

He said he called Sarah immediately for an explanation, and she yelled at him for “being invasive.”

“The discovery of their illicit affair spun petitioner into a state of utter mental chaos,” Hauke wrote. He added that he was diagnosed with situational anxiety and had trouble eating and sleeping.

Sarah Mackey denied receiving any such email from Larry Mackey, and said she didn’t even own an iPad at that time. She said all of the family’s electronic devices had been seized by authorities during the investigation. She repeated that she did not begin dating Mackey until late August, by which point he had stopped representing Keenan Hauke.

Hauke said the events happened as he was facing a stressful time in his life, as authorities were investigating his finances.

He admitted in the petition that he “engaged in practices that were illegal,” but said he counted on Mackey to try to negotiate a favorable deal with prosecutors, as he was a first-time, non-violent offender.

The problems came to light after a co-worker at Hauke’s hedge fund notified Indiana officials about irregularities he had discovered. The FBI soon joined the probe, leading to federal charges.

In April 2011, the Indiana Secretary of State’s Office began investigating, and a month later, revoked Hauke’s financial investing license. At the same time, a Hamilton County judge ordered a freeze against Hauke’s assets.

Hauke was a longtime financial columnist for IBJ, but the paper dropped his column after the legal problems arose.

The investigation showed that Hauke had invested millions of dollars from the hedge fund into Michigan real estate without telling clients, and the holdings ended up nearly worthless. To cover his tracks, Hauke create fake account statements for clients and used money from new investors to pay off earlier ones.

Hauke said he contacted Mackey on April 9, 2011, and the two later decided that Hauke would admit to his misdeeds and surrender to state authorities, the petition said.

A week later, however, Mackey told Hauke that the case would be prosecuted in federal court. Hauke said Mackey told him it was “a positive development, due to the fact that federal prison time would be easier than state time.

“This is an absurd claim, and demonstrates Mackey’s early attempt to sabotage Petitioner’s defense,” Hauke said in his petition. He argued that he would have served a shorter sentence in state prison, arguing that Indiana sentencing guidelines were more lenient than federal guidelines.

“The only explanation as to why [Mackey] did not inform his client is because Mackey was in the early stages of developing an improper relationship with petitioner’s wife,” Hauke’s petition said.

Hauke also claimed that Mackey told him he would receive a 30-month sentence from the federal government. Instead, when he was finally sentenced, while being represented by a federal public defender, Hauke received a sentence of 121 months from Judge Tanya Walton Pratt.

Sarah Mackey disputed her ex-husband’s version of Larry Mackey’s advice. She said Larry Mackey had been clear that federal sentencing guidelines would dictate the sentence and even sent him the guidelines several times.

Some experts in legal ethics say it’s highly irregular for an attorney to begin a relationship with a client’s spouse.

“I think it implicates a conflict,” said Margaret Christensen, a partner at Bingham Greenbaum Doll, who specializes in attorney ethics. “I’m not comfortable in drawing the conclusion that there is a conflict, but I think the analysis should be done.”

She said such a relationship would likely violate the spirit of the state’s Rules of Professional Conduct.

Keenan Hauke claims when he eventually was sent to prison, he got a visit in December 2012 from Larry and Sarah Mackey, who were married by this point. He said he told Larry Mackey he was considering filing a complaint against him, but Mackey responded by threatening to cut off funds for his children.

“Petitioner remained paralyzed against doing anything to help himself, out of fear that doing so would result in his children becoming destitute,” he wrote.

During an interview at IBJ offices, Sarah Mackey presented a much different version of the relationship. She said her ex-husband had wished her well in her new marriage. She presented what she said was a wedding card, written and signed by Keenan Hauke. It read: “I am happy for you. I love both of you and I know you will be there for each other forever. Keenan.”

But the interview took a strange turn, when Keenan Hauke called Sarah Mackey, and she placed the call on speaker while an IBJ reporter and editor listened.

Sarah Mackey asked her ex-husband if he wanted to give a statement that he was withdrawing his petition and had only filed it because he was angry with her.

Instead, Hauke said his claims were all true: “Every single thing I said in my motion was 100 percent accurate and factual and truthful, and I will attest to that in a polygraph in front of you, in front of my children, in front of anybody at any time.”

He added: “I submit to Mr. Mackey to submit to a polygraph as well.”

Sarah Mackey, visibly upset, responded: “You are nothing but a media hungry son of a bitch, and you will rot in the hell that you dug for yourself.”