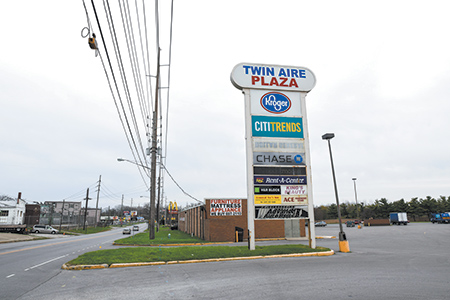 The city’s grand plans to transform the southeast-side Twin Aire neighborhood—in part by building a $572 million criminal justice center there—hinge on the cooperation of the out-of-state owner of a beaten-down shopping center adjacent to where the facility is to sit.

Chicago-based Mer Car Corp. owns the 95,700-square-foot strip center that’s anchored by a Kroger, where Southeastern and English avenues meet, just west of where the justice center is set to be built.

Tenants also include Ace Hardware and a Chase Bank branch. But two large empty spaces, one left by the departure of Dollar General, underscore the blight, along with the out-of-place orange-and-white striped construction barrel sitting at the entrance of a long-abandoned Rent-Way store. 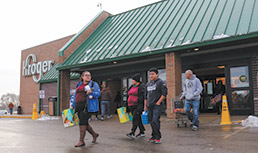 City and neighborhood leaders hope Mer Car will invest in the shopping center, or consider selling the property for possible redevelopment, as part of the plans to transform Twin Aire.

Mer Car, however, isn’t saying one way or the other. Company principal Mervyn Dukatt didn’t return messages from IBJ. He declined to comment, through his leasing agent for the property, Paul Rogozinski of locally based Veritas Realty.

Prospective tenants are beginning to show interest, Rogozinski said, but completion of the justice center is “so far off, people are kicking tires right now.”

The city in January 2017 selected Citizens Energy’s former coke plant site to build the criminal justice center, and last month agreed to buy the 140-acre property from the utility for $4.2 million.

City officials expect construction to begin this summer, with completion in 2021.

They expect office and retail development to follow, to serve the hundreds of workers who will move from the downtown City-County Building and the Marion County Jail, in addition to the throngs of visitors to the facility.

“Given the size of investment that we know is going to take place, we’re hopeful there’s a spillover on the shopping center itself,” said Jeff Bennett, the city’s deputy mayor of community development.

In 2013, Kroger invested $1.6 million in its Twin Aire store—a sign of its commitment to the neighborhood—long before the city chose the justice center site, Kroger spokesman Eric Halvorson said.

“We are intrigued by the potential for development around the site,” he said, “and we would welcome the extra traffic that would come from a complex such as the justice center.”

The justice center parcel at 2950 Prospect St. sits just east of the shopping center and the former Twin Aire Drive-In site, also poised for redevelopment. That 26-acre property is also owned by Citizens Energy and is shovel-ready.

Twin Aire is home to about 4,400 residents and is bounded by English Avenue to the north, Prospect Street to the south, Southeastern Avenue to the east, and Keystone Avenue to the west. The area’s median household income is just $20,320, roughly half that of Marion County overall.

When the shopping center opened in 1957, it was the city’s first. To the south was a bowling alley and behind that, the drive-in.

But the manufacturing jobs that once helped support the blue-collar area are dwindling and hastening its decline.

Even so, Jim Karozos, an industrial and retail broker at Indianapolis-based Newmark Knight Frank Halakar, said Twin Aire has potential. He likened it to Lafayette Square, where the arrival of dozens of immigrant-owned restaurants and markets have created an international marketplace.

“Everything that goes down has the opportunity to come back up,” Karozos said. “It’s probably not all the way bright, but I think the time is right for the revitalization of [Twin Aire].”

The neighborhood also is poised to get a boost from its selection as one of five neglected neighborhoods targeted by the $200 million Great Places 2020 initiative, which aims to mix private-sector investments with federal tax money to spark residential and commercial activity.

Bennett said city officials recognize the importance of the shopping center to the neighborhood’s redevelopment. Though they haven’t had direct conversations with the owner, they occasionally have contacted the property manager about the deteriorating condition of the property, he said.

“The future of the shopping center, and its ownership, have been a high priority for the neighborhood,” Bennett said.

Southeast Neighborhood Development Inc. is shifting its resources to Twin Aire, now that construction of the justice center is ramping up.

SEND, at 1035 Sanders St., has called Fountain Square home for several years and helped lead the effort to revitalize that area. But the group plans to move east to Twin Aire this summer, now that it considers its work at Fountain Square done. Space in the Twin Aire shopping center is among the locations it is considering for an office, at least for the short term.

“We feel like we need to be where the action is,” Smith said. “We played that role in Fountain Square, and now we’re moving on to Twin Aire.”

SEND, through a commercial real estate adviser in late 2016, inquired about buying the shopping center, if it could partner with a local group. Based on research, the not-for-profit believed the asking price would be in the $4 million range. It walked away after the owner countered with $6 million, Smith said.

“The arrival of the criminal justice center really increases the value to it, which wasn’t there two years ago,” he said.

The city on Dec. 19 released two requests for qualifications to select contractors for the criminal justice center—one for the jail and another for the courthouse. Responses are due Jan. 31.•