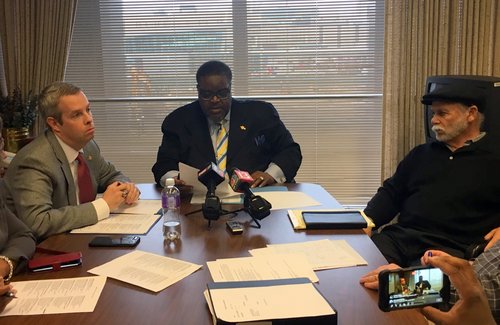 Newly elected President Stephen Clay has elevated Republicans to key leadership roles on the Indianapolis City-County Council—just days after those members helped him pull off what opponents in his own party called a “coup” to oust Maggie Lewis from the body's top spot.

But Clay's new alliance with both Republicans and the group of Democrats who propelled him to power is already showing signs of strain, as allies from both sides criticized some of his decisions.

Clay won the president position on Monday night with the votes of four other Democrats and nine council Republicans, even though Democrats currently hold 14 of the council's 25 seats.

He also appointed Joe Simpson, LaKeisha Jackson, Monroe Gray, and William Oliver—the other Democrats who voted for him as president on Monday—to serve as chairs of various committees.

McQuillen said the results show that Republicans have newfound power despite controlling a minority of seats on the council.

But Clay stressed that "in none of these transitions have we lost the majority” of the committees.

The changes were all made Thursday in the “committee on committees,” which is composed of McQuillen, Clay and Gray.

During the meeting, McQuillen also sought to remove former president Lewis from the council's Administration and Public Policy Committee and replace her with a Republican.

But Gray said he found it "offensive” that the minority leader would try to remove a Democrat from a committee, and Clay said he was “inclined to agree" and refused to go along with the change.

McQuillen said for that reason, he would give the first meeting a “95 percent approval rating.”

"I’m proud to say we are able to normalize all the committees except for one,” McQuillen said.

Gray during the meeting repeatedly voiced his displeasure with appointing Republicans to lead committees.

"I never thought it would go to the point where they would give away committee chairs,” Gray said. “The cohesiveness of getting things done as a body is a problem. We still have an opportunity to push forward our agenda but it would just be so much easier if you had the chairperson.”

“These appointments are clearly payments of debts owed for votes cast during Monday’s election,” Evans said. “Additionally, this is just the first of many decisions that will place political gamesmanship over the needs of our constituents."

The new committee chairs are: