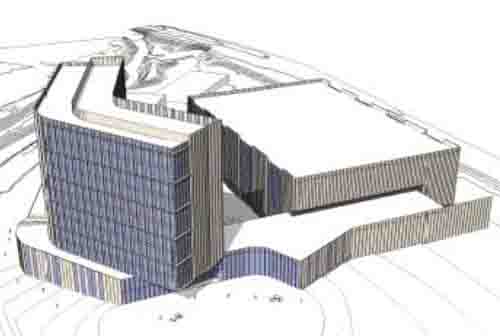 An Indianapolis City-County Council committee on Tuesday night unanimously approved spending $55 million to pay for a fraction of the construction funding to build the city’s proposed criminal justice center.

The same proposal also authorizes the city to spend $4.2 million for the acquisition of 140 acres of land from Citizens Energy Group as the site for the new jail, courthouses and mental health center. The facilities are being built on the property of the former Citizens coke plant in the Twin Aire neighborhood.

The proposal also indicates the council’s support for the project, which is expected to eventually cost the city $571 million. The full council will have to vote on the $55 million construction funding and land acquisition proposal—as well as future spending on the justice center.

Democratic council member Blake Johnson, who represents the area where the complex is being built, said the proposal has the potential to further the city’s criminal justice reform efforts by focusing more on diversion and mental health services than incarceration. He also said he thought the development has the potential to “catalyze” neighborhood development efforts.

“Jails don’t create jobs,” Johnson said. “But I do believe big projects that include a lot of other acreage catalyze neighborhoods to get together and get focused.”

Republican council member Colleen Fanning said the new center would create efficiencies in the criminal justice system and “free up some money to do more programming for crime prevention, mental health services, etc.” She said inefficiencies in the current system are resulting in taxpayer dollars “being thrown down the toilet.”

The $55 million in construction funding will pay for several items: $30 million to move soil that’s not amenable to build on and to create a building pad on which to build the campus; $9 million in construction management services; and $15 million for the teams that are selected to build the jail and courthouse so they can to perform initial work on the project before the rest of the financing package goes through.

The funds will be paid by the issuance of a short-term note backed by local option income tax dollars but eventually paid back by future bond proceeds, according to the city corporation counsel Andy Mallon.

The real estate deal consists of a $2.1 million initial lease with Citizens for parcels that need environmental remediation, which would eventually be transferred to the city for nominal amounts, and a $2.1 million purchase of other parcels that are expected to be developed for community purposes later on.

“This is really the art of the possible with respect to what can get done with those properties,” Mallon said. “We have some very important public uses we’re looking at.”

The jail—which would replace the the Arrestee Processing Center, Jail I, Jail II and Hope Hall, which is inside the City-County Building—would have 2,700 general population beds and 300 specialty, mental-health focused beds.

It would also include 40,000 to 50,000 square feet of “inmate education, job training, counseling and other programs making sure we’re providing folks with opportunities” once they are released, Mallon said.

The court facilities are still being designed to the specifications of judges and their staffs, Mallon said.

The jail and the courthouse will be bid out separately to allow for more regional, local or smaller bidders to have an opportunity to get project work, Mallon said.

The assessment and intervention center also is still being designed. It is planned to be on the same campus as the jail and courthouse, but is located across a creek on the property. Mallon said health providers “wanted to create a different environment, a more therapeutic environment.”

Representatives of various neighborhood groups came out to support the project, including Brenda McAtee of the Norwood Neighborhood Association, who said when she first heard of plans to build a jail, she thought it was going to be “just a big jail, like a prison,” but now views it as a “beautiful campus.”

McAttee said she appreciates that there is going to be diversion to services for people who need treatment, not incarceration.

Harlon Wilson of the Christian Park Neighborhood Association said the proposal was a “catalyst for change for innovation in crime prevention.”

Bradley Keen of Southeast Neighborhood Development Inc. said he supported the project and hoped there would eventually be affordable housing brought to properties that are near the jail and courthouse campus.

The meeting also was attended by several members of the “No New Jail” coalition, who spoke against the project. Ethan Evans, a member of the coalition, said it would be more advantageous to spend $571 million on a community center or job programs “so nobody has to be homeless on the street, nobody has to be locked up in these places, so people can get treatment.”

But Fanning, who applauded members of the coalition for sharing their personal stories, said “the no-jail-at-all thing doesn’t fly with me.”

“We have to do something and we have to change the status quo,” Fanning said.