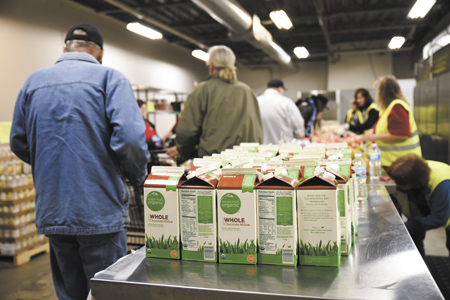 How much do tax breaks drive charitable donations?

That’s what local and national not-for-profits are waiting to find out as new tax regulations take effect that are expected to reduce the number of Americans who lower their federal tax bills by using a deduction for giving.

Local not-for-profit leaders say it’s too early to definitively say the change will cause donations to decrease. They’re hopeful donors give from their hearts, not to reduce their tax bills.

“We’re trying to take the positive, forward-thinking approach,” said Kent Kramer, president and CEO of Goodwill of Central and Southern Indiana. “Many in our field feel it may be into November and December before we can really see the true impact of this change.”

The charitable deduction was added to the federal tax code in 1917 to provide an incentive for taxpayers to donate.

It applies only to those who itemize their deductions—typically about 30 percent of U.S. households. Most taxpayers instead claim the standard deduction because it exceeds the total amount they could claim for giving, the interest paid on a mortgage, property tax payments and other deductions. 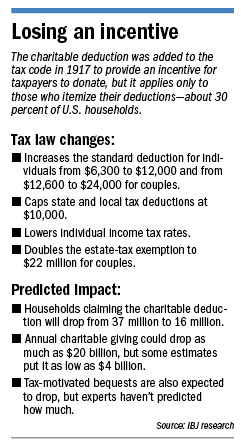 The change means even more households are likely to claim the standard deduction.

In fact, estimates show only about 10 percent of households will itemize their deductions under the new law, which means giving won’t lower their tax bills.

The law also reduced individual income tax rates, capped deductions for state and local property tax payments at $10,000, and doubled the estate-tax exemption to $22 million for couples—all factors that could play into charitable giving.

But the biggest fear in the not-for-profit community is that fewer people will give once they don’t need the charitable deduction to reduce their bills.

According to the Urban-Brookings Tax Policy Center—a Washington, D.C.-based nonpartisan think tank—the number of households claiming the charitable deduction is expected to drop from 37 million to 16 million.

Estimates of how much total giving could decrease as a result range from $4 billion to $20 billion.

A study from the Indiana University Lilly Family School of Philanthropy suggests that total giving could drop by $13.1 billion, which would be the biggest decrease since the one recorded from 2007 to 2009, during the Great Recession.

“Economics is not science,” IU Lilly Family School of Philanthropy professor Leslie Lenkowsky said. “It pretends to be scientific, but it’s a variety of estimates … so that’s why you get these wide ranges.”

But even the worst-case-scenario doesn’t worry Lenkowsky much. He said annual giving has increased about 4 percent the past two years. That rate would nearly offset a drop in giving of $20 billion, which accounts for about 5 percent of total donations to not-for-profits nationwide.

Lenkowsky also noted that foundations and corporations might increase giving because the economy and stock market are doing well.

“My view is, you should always be concerned. The thing about giving is, it’s voluntary,” Lenkowsky said. “But there’s no reason to be unusually concerned.”

While local not-for-profit leaders are cautiously optimistic that Indianapolis donors are not motivated to support organizations simply because of the tax break, they’re still preparing for a possible drop in donations.

“Every charity is having that conversation, one way or the other,” said John Elliott, president and CEO of Gleaners Food Bank of Indiana. “Everybody will have to try a different mix of things.”

One of the difficulties fundraisers are facing is that the tax bill doesn’t affect all their donors in the same way.

Elliott said the donors who give the biggest gifts and those who give the smallest ones will continue their same patterns. Those giving small donations likely weren’t itemizing, anyway, and those on the higher end will likely continue to itemize and receive the tax benefit.

It’s the donors who give mid-range amounts, from $250 to $2,000 or so, that are most likely to start taking the standard deduction.

“It’s the upper-middle class that has the biggest portion of dollars at risk here,” said Jenny Pfeil, chief development officer of the Indiana chapter of the American Red Cross. “We might not see gifts from them as frequently as we have in the past.”

Elliott said he’s not sure how many of Gleaners’ donors fall into that category. But of the organization’s $60 million annual budget, $4.6 million comes from individual donations.

Lenkowsky said the biggest recipients of those midsize donations tend to be religious organizations, so those would be the groups that need to be more concerned.

The IU study, which was published in May and was based on similar tax proposals, suggested that giving to religious organizations could decrease 4.7 percent.

David King, the Karen Lake Buttrey Director of the Lake Institute on Faith and Giving at the IU philanthropy school, said he’s optimistic that religious donors are more motivated by their beliefs than by tax implications.

“It’s clearly a topic of conversation, but I think most feel it’s too soon to tell,” King said. “The message I think we’re hearing is, a lot of questions and some anxiety.”

Rob MacPherson, vice president of development and philanthropic services at Central Indiana Community Foundation, agreed that the middle-level donors are the ones who could stop giving.

“Hopefully, most people are motivated by taking care of the organization they care about,” MacPherson said. “The need is still going to be there.” 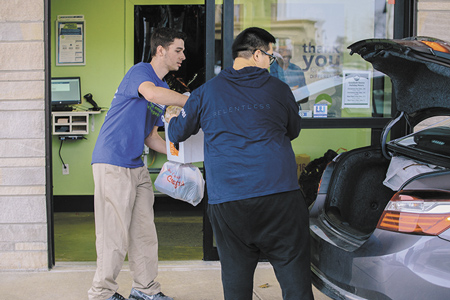 Goodwill of Central and Southern Indiana hopes sharing impact stories with the public will motivate people to keep donating money to its cause. (Photo courtesy of Goodwill)

Donors who know more about what an organization does and how it helps the community will probably still be motivated to give, fundraising leaders said.

“We’re really trying to focus on getting those success stories out there so that our goods donors and financial donors really understand the impact they can have on the community,” said Goodwill’s Kramer.

He said if donors are more aware of the concern not-for-profits have about declining donations, some might give more to make up for it.

“I think people will step up,” Kramer said. “I think we’ll continue to see solid support.”

Only 1 percent of Goodwill’s budget comes from individual cash donations. But “even though it’s a small percentage of our budget,” Kramer said, “it’s extremely important.”

At Girls Inc. of Greater Indianapolis, about a third of the budget comes from individual donations. Madeleine Smith, vice president of development and public relations, said the group hopes donors “continue to see the compelling need to support our work.”

“However, we are realistic and anticipate many donors may feel apprehensive about their tax liabilities, and for that reason, it will be more important than ever to engage our donors with our work in a meaningful way,” Smith said in an email.

Girl Scouts of Central Indiana CEO Danielle Shockey said leaders are concerned about a potential decrease in giving, but they know from talking to donors that many give because they’re motivated by what their dollars will be used for—programs that support young girls.

“You can see the benefits very clearly, the link to the girls, with what we do,” Shockey said.

That being said, Shockey said GSCI is prepared to talk to donors about other ways to make a donation and still receive a tax benefit, such as giving appreciated stock, naming the Girl Scouts as a beneficiary of retirement plan assets, giving from an IRA, or giving real estate.

“We wouldn’t be proactively thinking about this if we didn’t have some ideas for them,” Shockey said.

King said churches and religious organizations have historically not been as proactive and transparent as they should be about soliciting donations, but that might have to change.

“I think it’s a great time and an important time for faith leaders to think about how they present their case in raising money,” he said.

MacPherson said gifts the Central Indiana Community Foundation awards won’t be directly affected by the change because its donors receive the tax benefit when they open funds or add to existing funds, not when grants are made.

But, he said, the foundation plans to help organizations with their messaging and communication to donors to build awareness of the issue.

“It’s incumbent upon us to help everybody understand the implications of the tax law,” he added.

And one strategy in particular that might have to change is year-end giving campaigns. Many not-for-profits focus on encouraging donors to give before Dec. 31 in order to receive a tax break.

“That’s not going to have as much influence in 2018 as it did in 2017,” MacPherson said. “I think we’re going to have to stop using that language.”

Pfeil, of the Red Cross, said leaders haven’t discussed their year-end approach yet, but it is the group’s biggest time of year for donations.

“Our strategy is really to connect with those donors starting now and working with them throughout the year,” she said.•