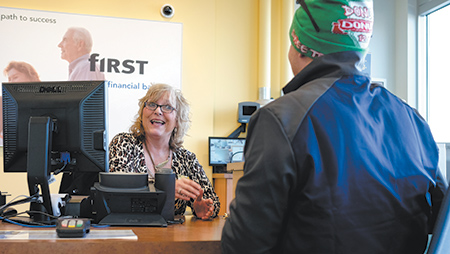 Two words can explain why dozens of banks—including some in central Indiana—have announced employee pay raises, bonuses, charitable giving and other financial programs in recent weeks.

Bankers and industry experts say the federal reforms passed late last year will give an especially big boost to banks.

That’s partly because banks—unlike some industries that are eligible for a broader range of deductions and credits—typically pay close to the statutory corporate tax rate of 35 percent.

Under the new law, that rate plunges to 21 percent, which “clearly is a benefit to the banking industry,” said Michael Dunlap, president of Carmel-based Merchants Bancorp.

Added Todd Lady, a tax attorney who is a partner at the law firm of Taft Stettinius & Hollister LLP: “All banks are in really good shape after tax reform. They’re all going to do better. A [14-percentage-point] reduction in the corporate tax rate puts a lot more money in the banks’ hands.”

And banks haven’t been shy about touting their plans for this extra money.

According to the American Bankers Association, more than 75 U.S. banks have announced plans for employee raises and bonuses, plus stock-dividend increases and increased charitable giving.

The announcements have a public-relations aspect to them, Lady said. In the wake of the 2008 financial crisis, banks are sensitive about their public images. But they wouldn’t make such public commitments unless they knew they had the money to spend, he said.

First Financial—which is in the process of buying Greensburg-based MainSource Financial Group for $1 billion—raised its minimum hourly pay to $15, raised its quarterly stock dividend from 17 to 19 cents, and set aside $3 million to establish a foundation that will support economic and community development.

CEO Claude Davis said First Financial had been thinking about increasing pay and starting a foundation, but tax reform gave it the push to act now.

“Because it’s going to have a significant financial impact, we felt it was important that, really, all of our constituents see the benefit of that,” he said.

The investment comes at a time First Financial is substantially bolstering its presence in the Indianapolis market. Once the MainSource purchase closes, it will have 16 branches locally, double its current footprint.

Davis said First Financial intends to make other “employee-related improvements” and investments with its tax savings, though details haven’t been worked out.

Some banks, including Evansville-based Old National Bancorp, are still mulling what they’ll do with their tax savings.

“We’re taking our time; we’re talking with our board of directors about the best reaction for Old National,” said Jim Ryan, its chief financial officer. “We’re taking a very intentional view and don’t want to overreact.”

Old National, like many banks, took a fourth-quarter earnings hit because of tax reform.

It’s one of many institutions carrying so-called deferred-tax assets, which can be used to reduce tax burdens in future quarters. When the tax rate dropped, the value of those assets dropped, too.

As a result of that revaluation, Old National saw its tax expense swell by $39.3 million in the fourth quarter, contributing to a quarterly loss of $18.5 million.

Ryan said Old National nonetheless sees tax reform as a resounding long-term win, for both banks and their customers, who also will be paying lower rates. That could lead them to make additional investments for which they’ll need bank loans.

The American Bankers Association estimated in January that nearly 600 banks would see their fourth-quarter results suffer for the same reason Old National’s did. 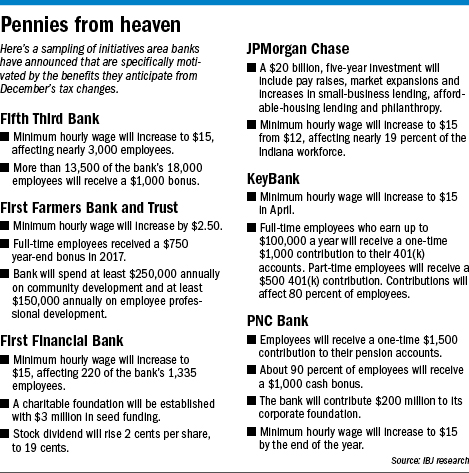 “It’s an on-paper loss. It’s a one-time charge,” said Morrie Maurer, CEO of The National Bank of Indianapolis, which also took a fourth-quarter hit. “Just about everybody had a write-down. The analysts looked right past it.”

Maurer said his bank is considering a pay increase for some employees as a result of tax reform.

While banks are thrilled with tax legislation overall, not all the provisions will be beneficial.

Under old rules, businesses could deduct 50 percent of entertainment expenses, like client meals or event tickets. Now, none of that is deductible.

Maurer said this spending, which he described as “customer retainment,” might slow.

“Will banks reduce their budgets correspondingly? I don’t know. We’re looking at that,” he said.

Also unclear, Maurer said, is whether customers will be less inclined to take out large mortgages or home-equity lines of credit.

Previously, the interest on home-equity loans was deductible, up to $100,000. The new law also caps mortgage-interest deduction at $750,000, down from the previous $1 million.

On the other hand, demand might rise because tax reform leaves borrowers feeling more optimistic.

“A lot of this is still emerging, and it’s beginning to take shape,” Maurer said.

He is the cousin of Mickey Maurer, who is chairman of the bank and a shareholder in IBJ Corp., which owns IBJ. Nate Feltman, another IBJ Corp. shareholder, is a National Bank of Indianapolis director.•