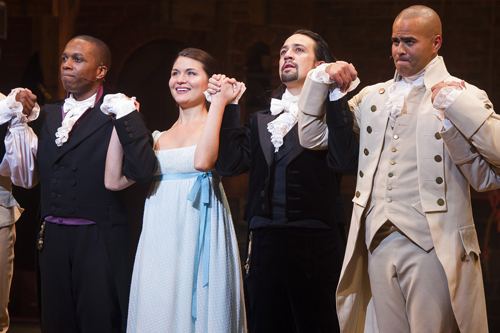 Broadway phenomenon “Hamilton” is coming to Indianapolis, but fans will need to be patient.

Presenting company Broadway in Indianapolis announced Tuesday that the national tour of “Hamilton: An American Musical” will be part of its 2019-20 season, although an official date hasn’t been determined. That means the record-setting show could be scheduled as early as September 2019 or as late as April 2020.

Organizers said more specifics about “Hamilton” will be announced at a later time.

The group is tapping the popularity of “Hamilton” to sell tickets for its upcoming 2018-19 season, which features six shows, starting with “Disney’s The Lion King” from Sept.12-29 and running through “Waitress” from April 23-28.

Tickets can be ordered at the Broadway in Indianapolis Box Office in the Old National Centre at 502 N. New Jersey St., Monday  through Friday from 9:30 a.m. to 5 p.m. They also can be ordered online at www.BroadwayinIndianapolis.com.

“Hamilton” is a multiple Tony-award-winning musical about the life of founding father Alexander Hamilton notable for its use of hip-hop and rap. The show has set several box office records since opening in 2015. It won 11 Tony awards in 2016, including the award for “Best Musical.”