In the 20 years I’ve lived in Indianapolis, I’ve been inside relatively few downtown buildings, but I’ve passed nearly every one of them by vehicle or on foot. This is the importance of the public realm. The buildings that surround us have a profound effect on our experience of the city.

Since its establishment in 1821, downtown Indy has experienced several distinct character shifts in the buildings that form the walls of our shared outdoor rooms. For the first 30 years, the city was primarily a wilderness outpost and its buildings were primarily residences.

Bolstered by the arrival of the railroad in 1850, the next 50 years established Indy as a verifiable city. While far too little from this era remains, I imagine the cobblestone streets, gas lamps, streetcars and the tightly knit, low-rise, revivalist-style buildings with their “English-basement” shops might have been reminiscent of neighborhoods in Paris. 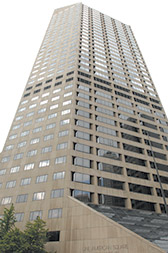 The Merchants National Bank building, left, completed in 1912, has a base designed for pedestrian engagement. In contrast, the OneAmerica Tower, built 70 years later, has an imposing stone facade that hides an internal courtyard. (IBJ file photos) 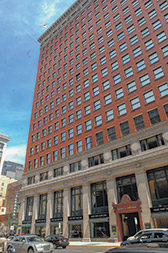 Like a great many cities in America, Indy’s turn to the 20th century also saw a turn to high-rises and “Beaux Arts” styling. Most of the remaining historic architecture downtown, including the Soldiers & Sailors Monument, comes from this pre-World War II period.

It was the next era, one dictated by post-World War II modernism, when we lost our connection to the public realm. Through the previous eras, the streets were full of the hustle-bustle of daily life. I am still amazed whenever I see the historic photographs of Washington Street, wall-to-wall with pedestrians mingled with bikes, horses, buggies and streetcars. By the early 1950s, the sidewalks were comparably silent, as air-conditioning, automobiles and television were changing how we used our leisure time.

The space-age, car-centered, individualistic ethos that was propelling the culture gave rise to modernism and its fundamental premise: disdain for the past. That is perhaps best illustrated by the hundreds of historic structures that were bulldozed when the interstate highway system pushed into downtown in the 1960s.

One of the first buildings of this era was the American Fletcher National Bank Tower on Monument Circle, now known as the Salesforce Tower. The curving curtain wall facade sheds traditional notions of ornament in favor of mathematically derived rhythm and proportion. There is only the slightest hint of human scale—just enough to help you find the doors among the reflective glass panels that purposefully obscure the activity within. The building shuns any opportunity for street activation, burying its retail activity deep inside. Compare that with its neighbor across Market Street, Circle Tower. Not only does this art deco gem bring retail activity to the street, it celebrates the pedestrian scale with a cadence of arched openings of clear glass.

Divorced from the street and freed by technological advancements, modernists pushed farther into the sky. Sheer height became the substitute for substance and presence. There is no clearer illustration than the razing of the original county courthouse to make way for the city’s second major international-style structure, the City-County Building. Deeper than the loss of the courthouse itself, which was right next to Washington Street, the new building squashed what had been an open-air market and a symbol of community on Market Street.

As the modernist buildings became taller, they seemed to further disengage themselves from their surroundings, becoming graphic compositions in the skyline intended to be viewed from afar. The OneAmerica Tower, one of the city’s last modernist-era skyscrapers, is literally a cloister with its stark stone facade surrounding an internal courtyard.

In contrast, consider the Merchants National Bank building (now the home of Barnes & Thornburg LLP law firm) at Meridian and Washington streets. It was one of the city’s first high-rises and spent some time as its tallest. Adhering to the traditional three-part massing of “base, middle and cap,” it acknowledges an urban building’s interaction with both street and sky. It, too, has a limestone base but one that is permeable, full of transparent glass and articulated for interest and engagement at the pedestrian scale. From a distance, it remains one of the most compelling in the skyline.

At its core, modernism was an optimistic philosophy energized by the potential of the future. The drive to simplify is laudable, but simplicity can be sterile. Whatever you might think of the aesthetic, in the end, its weakness is its lack of humanity.

As our attitudes about urban spaces are changing, we need to recognize that the legacy of modernism remains with us.

One of those buildings, the AT&T 220 building on Meridian Street just north of Monument Circle, is the target of redevelopment plans by new owner Keystone Realty Group.