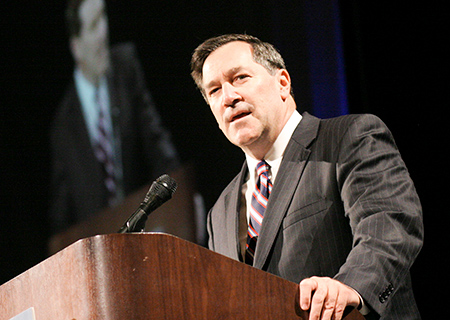 At a diner in Rensselaer in northwest Indiana last week, Sen. Joe Donnelly, a Democrat, faced some agitated constituents. It wasn’t Donnelly’s opposition to the GOP tax-cut that animated these voters in the Republican-dominated state.

Instead, many of the more than two-dozen farmers gathered aired complaints about President Donald Trump’s policies, primarily escalating trade tensions that threaten exports of pork and soybeans to China and corn sales to Canada and Mexico, as well as an uncertain future for a government mandate that fuel be mixed with corn-based ethanol.

They were the type of voters Donnelly is doggedly cultivating as he seeks a second term in a state that Trump won by 19 percentage points in 2016. The only member of the Indiana congressional delegation with a spot on an agriculture committee, he stressed his work with GOP senators on a forthcoming crop-subsidy bill and his contacts with Trump administration officials to urge a better trade climate.

“You shouldn’t be punished for the initiative you’ve shown in developing these markets,” he told them. “I take this as serious as serious gets.”

Donnelly’s effort to highlight his pragmatic, centrist stance is being repeated in a set of other states Trump won where Democrat incumbents running in November are most at risk, including West Virginia, Missouri, North Dakota and Florida. Their electoral fates are pivotal in determining control of the Senate, where the GOP clings to a one-vote margin. There are only three Republican seats at similar risk of flipping: Nevada, Arizona, and Tennessee.

Recent special elections that reaped Democrats an Alabama Senate seat and a House seat in Pennsylvania hint at a building anti-GOP wave that may keep vulnerable Democrats in office. Donnelly faces a fight no matter what.

He’s one of only three Democrats in Indiana’s 11-member congressional delegation and the top statewide offices are filled by Republicans. He won a long-shot bid for the Senate seat in 2012 with barely 50 percent of the vote after the Tea Party-backed Republican candidate, state Treasurer Richard Mourdock, effectively sank his own campaign with a controversial remark about abortion and rape.

Trump will be a factor in the Indiana race as well as other midterm campaigns. Indiana voters embraced Trump’s message that he would lift up working class voters who’ve lost jobs or suffered stagnant wages as a result of a global trading system that he said was unfair to the U.S. His selection of then-Indiana Governor Mike Pence as his running mate helped seal his appeal.

Yet Trump’s standing in the Hoosier state is slipping, even though the state’s economy has been on solid footing with an unemployment rate, 3.2 percent, well below the national average. A year ago, 55 percent of Indiana voters surveyed by Morning Consult approved of Trump, while 33 percent disapproved. At the end of February, just 49 percent approved and 46 percent disapproved, near parity in a survey with a two-percentage-point margin of error.

The three Republicans vying to challenge Donnelly, U.S. Reps. Todd Rokita and Luke Messer, along with businessman Michael Braun, are engaged in a bitterly contested, neck-and-neck contest in which all three are closely embracing Trump.

“They’re trying to associate themselves with him every step of the way,” said Indiana political analyst Ed Feigenbaum, a strategy that might be risky in a general election. The Republican race will be decided in a primary May 8.

Rokita has brought a cardboard cutout of Trump to rallies and last week released an ad in which he dons a red “Make America Great Again” cap. In an interview, Rokita said he’ll hammer Donnelly for his votes against the tax cut and a bill to repeal Obamacare, as well as his support for a 2013 immigration bill that would have provided a path to legal status for 11 million undocumented immigrants.

“He has vulnerabilities so wide that we’re going to be running the Rokita-Trump train through it,” Rokita said.

Donnelly’s response has been to craft a bipartisan brand.

A New York native who graduated from the University of Notre Dame in South Bend and stayed in the state, Donnelly once owned a printing company but first went to Congress in 2006, when Democrats took control of the House. Representing a GOP-leaning northern Indiana district, he joined the centrist Blue Dog coalition and parted ways with his party repeatedly. He voted against climate change legislation in 2009 and pulled his support for Nancy Pelosi as Democratic leader after the party lost the House in 2010.

In the Senate, Donnelly voted with Republicans to build the Keystone XL oil pipeline, and in favor of many of Trump’s nominees, including Supreme Court Justice Neil Gorsuch.

With the election looming, he’s showcasing his work with Republican senators on legislation to secure passage of $4 billion in opioid funding for states, the broad-based farm bill up for debate in coming weeks and a just-passed measure with Senate Banking Committee Chairman Mike Crapo, an Idaho Republican, that eased regulations for regional and community banks.

“I’ve always believed that the best campaign is to just do your job the very, very best you can,” Donnelly, who’s unopposed in the Democratic primary said. “So I feel very positive about this.”

A wild card is the escalating trade battle between the Trump administration and China. Indiana is No. 1 among steel-producing states, and Trump was cheered by companies and their workers in the northern part of the state when the president said he’d slap a 25 percent duty on steel. But then China threatened to retaliate with tariffs on agriculture products including soybeans and corn, the two top commodities produced by Indiana farmers. Auto and auto-parts makers in the state also would be hit by a trade war.

Donnelly has urged Trump to take a more-measured approach that would scotch the firm duties on metals for something more targeted that might defuse the situation. The GOP Senate contenders have praised Trump’s announcement on steel, but also are waiting to see what unfolds.

“I agree with the concept of the tariffs but I want to help the president do this in the right way,” Donnelly said in an interview. “This is also something that you need to do in a smart, targeted way.”

His toughest issue will likely be his vote against the $1.5 trillion tax cut that passed the Senate in December on a party-line vote.

Donnelly and two other vulnerable Senate Democrats—Missouri’s Claire McCaskill and North Dakota’s Heidi Heitkamp—already are being targeted by an $8.5 million ad campaign highlighting their “no” votes on the tax cut. The spending on television and online ads comes from Americans for Prosperity, the largest political player in the network of conservative groups led by billionaires Charles and David Koch.

Donnelly’s opposition is costing him with some voters, including in some GOP-dominated and vote-rich suburban counties outside Indianapolis. Rick Sumner, a college teacher who lives in nearby Zionsville, said he’s a registered Republican and voted for Donnelly in 2012. He won’t this time because of the tax-cut vote.

“He’s lost my support because of his lack of support for Trump’s policies,” he said.

Yet another Republican voter, Karl Hadley of nearby Carmel, said he’ll be backing Donnelly because the Republican candidates have so closely embraced Trump, who he called a bombastic “megalomaniac.”

“The Republicans running for this seat are painting themselves with Trump,” Hadley said. “They won’t get my vote.”

“He can sit back and continue to build constituent relationships, raise dollars and go throughout the state and do his job,” Culp said after the meeting with Donnelly. “I think that bodes well for him. And he’s certainly been a friend to agriculture.”