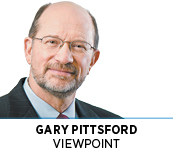 Last month, The Wall Street Journal published a column by Robert Atkinson and Michael Lind that, like their new book, “Big Is Beautiful,” seeks to debunk the “myth” of small business.

I started reading the article because I was intrigued by what the authors would say about the sector to which I have dedicated most of my career. I forced myself to continue reading when I realized how bad their information is.

As context, remember this: The nation’s 28 million closely held businesses account for more than 50 percent of our national gross domestic product. Further, six of 10 people who get hired in the United States go to work for a closely held family business.

Atkinson and Lind imply that such impact is snake oil. I can’t list all their arguments, but I’ll highlight a few:

◗ They claim the tax code “lavishes benefits on small firms.” They correctly point out that profits for large public companies are taxed twice, but they fail to mention that tax reform lowered most big corporations’ tax rates to 21 percent. By contrast, pass-through firms such as sole proprietorships, partnerships and LLCs (most of the closely held family businesses) are taxed either at 37 percent or roughly 30 percent if they qualify for the Qualified Business Income deduction. So, the local hardware or grocery store pays federal taxes at those higher rates while Apple, Exxon and General Electric pay 21 percent.

◗ The authors suggest small businesses get cut-rate financing supported by the SBA. It’s true that business owners that apply for a loan with a local bank can get an SBA loan guarantee (which would pay 90 percent of the loan if the business went broke), but that guarantee comes with a hefty fee and does not include rate discounts. Also, that small-business owner signs for loans personally, unlike officers of large public companies.

As troubling as those claims are, I’ve saved the most stunning one for last: Atkinson and Lind say small businesses actually slow our economy in two ways:

◗ They charge that subsidies and other size-based policies enable less-efficient firms to gain market share. I would suggest the authors try to convince the founders of Walmart, Microsoft, Amazon and Google that they should not have been encouraged to gain market share when they were small and inefficient.

◗ The authors say “discriminatory policies provide an incentive for small firms to remain small” in order to avoid regulations and remain eligible for government handouts. To this absurdity I can only say that, in 45 years of working with business owners across the country, I have never met one who planned to stop growing to avoid government regulations. Also, I know of no business owner who looks forward to government handouts. On the contrary, most work hard every day and pay taxes in order to support a government that regulates them more every year.

I have no problem with Atkinson’s and Lind’s belief that big is beautiful. I do have a problem with their suggestion that the impact millions of small-business owners have on our economy is some kind of “myth,” especially if they base that suggestion on bad information.•

Pittsford is president and CEO of Castle Wealth Advisors.