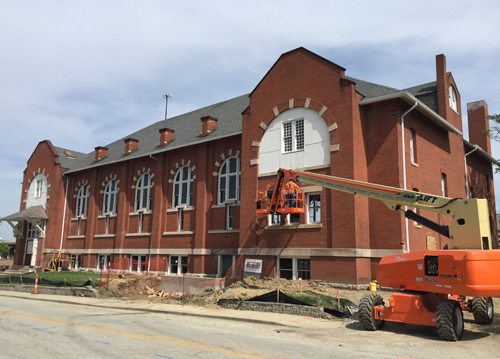 A local couple that operates a downtown insurance firm is coming to the rescue of the Southside Turnverein building.

Built in 1900, the three-level structure at 306 Prospect St., just south of Interstate 70 and the Eli Lilly and Co. campus, is in such sad shape that it has shown up on Indiana Landmarks’ Ten Most Endangered list.

But the husband-and-wife duo of William Atkins and Betsy Brougher has embarked on a “multimillion-dollar” renovation to convert the 21,000-square-foot building into office space for their company. 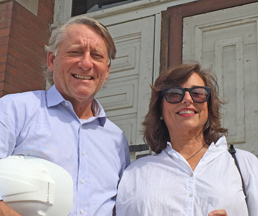 Both veterans of the insurance industry, Atkins and Brougher founded the company in October 2015 with four employees. It’s since grown to 35, prompting the need for more space.

Point Comfort, set to move to the Turnverein building in September, will occupy the second level, where the gymnasium since the late 1970s had hosted  league basketball games.

The Turnverein originally served as a German cultural center until its operators sold it in 1977 to Tony Elrod, who worked with partners to fix up the building and restore the gymnasium for use as a basketball court.

Elrod, under his Madison Avenue Athletic Club Inc. company, sold the building to Atkins’ and Brougher’s Point Comfort Properties LLC in July for $950,000, according to county assessor records.

Initially looking to lease, Atkins and Brougher deemed the Turnverein “perfect” for their business.

“It’s the right size. I love the location, and it’s a historic renovation,” Brougher said.

But what caught Brougher’s attention about the Turnverein is that Vonnegut and Bohn also designed School No. 9 on North Fulton Street downtown, now occupied by the Young & Laramore advertising firm. Members of Brougher’s family renovated the school for office use, Brougher said, explaining why the Turnverein “jumped out at me.”

Atkins and Brougher plan to sublease part of the lower level, where a two-lane bowling alley, since removed, once provided entertainment for the German membership. In more recent years, the bottom floor played host to heavy metal venue the Fifth Quarter Lounge.

A common area, kitchen, locker room and bike room also will be housed on the lower level. The third level will include a conference room and executive office for Atkins and Brougher. They’re uncertain about what they’ll do with the rest of the third-floor space.

What is more evident is what the couple needs to do to bring the building up to modern standards while maintaining its historic feel.

They have replaced or rebuilt all of the building’s 150 windows, repaneled or repaired all 47 doors and will refurbish the original lamps hanging over the gymnasium, equipping them with LED lighting.

They’re also using all the original oak bannisters and spindles. In addition, a single-person elevator is being installed to meet Americans with Disabilities Act requirements.

The entire foundation has been waterproofed, and plans call for a 40-space parking lot at the rear of the building. Counting space across Prospect Street, a total of 70 parking spaces will be available.

Free parking and the building’s proximity to the interstate should help Point Comfort recruit employees and companies searching for space to lease, Atkins said.

What is not salvageable on the building, however, is the bas-relief sculpture designed by Austrian sculptor Rudolph Schwarz on the west gable. It’s beginning to crumble, and, in some places, metal rods protrude where pieces have fallen off.

Atkins and Brougher have applied to have the building placed on the National Register of Historic Places. As part of that process, they had to prove that the sculpture is too far gone to be restored. A Chicago firm the company hired to evaluate the piece “condemned” it, Atkins said.

The couple plans to replicate it using modern technology.

“It will be kind of a punctuation to our historic rehabilitation,” Atkins said. “That’s the important thing, that this building is being saved.”

Ratio Architects is the architect on the project. Brandt Construction Inc. is the general contractor.