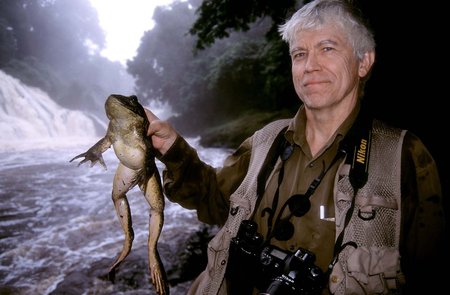 Dr. Russ Mittermeier—best known for his international leadership in championing the concept of biodiversity hotspots—has won the 2018 Indianapolis Prize for his efforts in animal conservation, the Indianapolis Zoological Society announced Tuesday.

Mittermeier, 69, the seventh recipient of the prize, will receive $250,000 and the Lilly Medal.

The Indianapolis Zoological Society established the Indianapolis Prize in 2006 to honor the world's top animal conservationists. The prize is given every two years and is the largest international monetary award given exclusively for successful efforts to save endangered or threatened species.

As the chief conservation officer for the Austin, Texas-based Global Wildlife Conservation, Mittermeier has been credited with protecting hundreds of species and millions of acres of critical habitat around the world.

““Russ is considered the world’s preeminent primate conservationist and has observed more primate species in the wild than anyone else … ever,” Michael Crowther, CEO of the Indianapolis Zoological Society, said in written comments. “In part because of his efforts, primates remain the only larger group of mammals to have not lost a single species or subspecies to extinction in the last 100 years!”

Mittermeier is known for promoting biodiversity hotspots—areas known for their biological diversity, endemic species and severe level of threat. By concentrating its investments to those spots, the conservation community is able to make a targeted, strategic impact in places that sustain the majority of life on earth.

Experts say biodiversity hotspots are one of the most important conservation developments of the last quarter century.

Another of his priorities are “high biodiversity wilderness areas,” biologically rich areas of the world—such as the tropical forests of Amazonia and the Congo—that still have much of their habitat largely intact.

“Russ’ fingerprints are on conservation worldwide, both in terms of projects and careers he has inspired and fostered,” Dr. Thomas E. Lovejoy, a senior fellow at the United Nations Foundation and professor of environmental science at George Mason University, said in written comments. “Global conservation is measurably better, stronger and more vibrant because of Russ Mittermeier.”

For more than 40 years, Mittermeier has been chair of the International Union for the Conservation of Nature Species Survival Commission’s Primate Specialist Group.

He also created another International Union for the Conservation group nearly 40 years ago to focus on reptiles, particularly tortoises and freshwater turtles.

Mittermeier has been involved in the description of more than 20 species new to science—including three turtles, seven lemurs, four tarsiers and seven monkeys. He has eight species named after him by colleagues (three frogs, one lizard, two lemurs, a saki monkey and an ant).

The winner and finalists will be formally honored at a gala Sept. 29 in Indianapolis. The Eli Lilly and Co. Foundation has provided funding for the Indianapolis Prize since its founding.

“The finalists for the Indianapolis Prize are all amazing colleagues and good friends of mine, and to be considered for this award in their company is humbling,” Mittermeier said in written remarks. “I am honored to be the 2018 Winner and applaud the Indianapolis Prize for giving a larger platform to conservationists doing important, significant work. It’s my hope that more people will be inspired by their heroic stories and moved to take actions that save species around the world.”

— 2006: Dr. George Archibald, the co-founder of the International Crane Foundation;

— 2008: George Schaller, known as one of the founding fathers of wildlife conservation;

— 2010: Iain Douglas-Hamilton, founder of Save the Elephants;

— 2014: Dr. Patricia C. Wright, founder of Centre ValBio, which works to save Madagascar’s lemurs from extinction;

— 2016: Dr. Carl Jones, known for his species recovery success on the island of Mauritius, including the echo parakeet, pink pigeon and Mauritius kestrel.