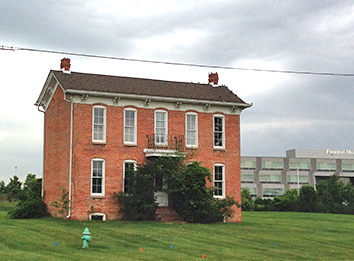 A 157-year-old brick house that was saved from the wrecking ball four years ago is getting a new home near a busy commercial corridor in Fishers.

The city of Fishers announced Wednesday it will acquire the historic Morris-Flanagan-Kincaid House from the Nickel Plate Arts and move it to USA Parkway near Portillo’s, Ikea, and the Yard at Fishers District, which is now under construction.

"The house will serve as the centerpiece of a new roundabout, giving it renewed visibility and recognition of its historic value to the city," the city said in a written statement.

The home, built by the Peter Flanagan family in 1861, has been located since 2014 on two acres of land along Interstate 69 that was donated by student loan giant Navient.

The Italianate-style farmhouse was constructed at 106th Street and Kincaid Drive, using clay bricks that were made on-site. The house was owned by several members of the Kincaid family from 1934 until the Great Recession. The most recent was Dan Kincaid, a descendant of Loma E. Kincaid, the founder of L.E. Kincaid Meat Market on Illinois Street in Indianapolis.

In 2014, developer Thompson Thrift acquired the home and the 70 acres surrounding it to build the Delaware Park commercial subdivison.

Thompson Thrift had plans to demolish the home until preservation organizations stepped in. Hamilton County Tourism helped move the home to its current site and deeded it to the Nickel Plate Arts group while a permanent solution for what to do with the home was sought. The home can be seen now by travelers heading north on Interstate 69.

Hamilton County Tourism said it will support improvements to the house after the move. A viewing and education area is planned for the northwest side of the roundabout and will be accessible by a sidewalk from the north.

The organization has been working for years to identify possible uses for the house that both fit the city’s master plan and sustain the property, Hamilton County Tourism president and CEO Brenda Myers said.

Currently, the organization and the city are assessing what needs to be done to the home’s exterior to ensure its stability, she told IBJ, but improvements will include a facelift, though the home won’t be fully restored.

During the spring, the house was vandalized when bricks were thrown through the windows, she said, so the glass will have to be replaced.

Eventually, the organization hopes to put chimney caps back on the home, she said. The house also needs a new roof.

The interactive viewing area will tell the story of the home, she said.

“This will be a tribute to the farming community Fishers once was,” she said.

Fishers’ plans for the house allow the city to celebrate its history while also creating a new attraction for the city, Mayor Scott Fadness said in written comments.

“Through its architecture and list of industrious former owners, the house represents the innovation of the past. It will perfectly complement its new surroundings, which showcase the vibrant, entrepreneurial spirit of the future,” he said.