Home » MIKE LOPRESTI: Pacers part of a club no one wants to be in 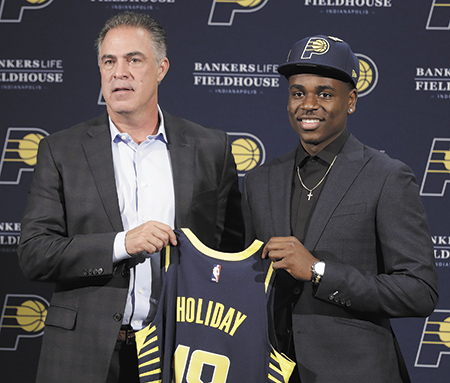 Perhaps an explanation is in order.

It’s about the NCA. Doesn’t ring a bell? The No-Championships Association, an organization in which no one wants to be a member. The challenge, if you are unfortunate enough to belong, is to find enough players to get you kicked out. And now that the NBA draft is over, the Pacers are abuzz about the future, confident that Aaron Holiday was the right answer.

Of course, first-round picks are always supposed to be the right answer, whether the name is Reggie Miller or Rik Smits … or David Harrison or Scott Haskin. You might recall some of those answers didn’t turn out to be all that correct for Indiana.

Did you ever see a general manager sit before a microphone and say, “This really isn’t the guy we wanted?” That’s what makes draft coverage so amusing. The only place that spends more time on conversation about something that might or might not ever happen is The Weather Channel.

Anyway, the idea of the draft is to help build a champion one day, right? Pave the long, long road to that first NBA title. Well, then, we bring two items as souvenirs from the 2018 draft.

The first is a UCLA cap. Clearly, the Pacers have turned Westwood into their drafting Amazon, since Holiday was the third consecutive Bruin they picked, going back to T.J. Leaf and Ike Anigbogu last year.

The second is this rather unique waiting list: the NCA, filled with the names of the franchises in professional sport who have gone into the playoffs again and again—and again—and are still yearning for that first trophy presentation.

When the Washington Capitals held up Lord Stanley’s Cup recently—that’s the NHL trophy for those in the no-puck section—they were out of the NCA as fast as their skates could carry them. The Capitals had advanced to the playoffs 27 times without winning a title.

Which begs two questions: What other teams are high on this wait list, and might the Pacers be near the top? Sorry, those ABA glory years at the Coliseum don’t keep them off the list—NBA championships only. One other proviso: We’re talking franchise history, not city history. The Atlanta Hawks don’t qualify as non-champions, for instance, because they once won as the St. Louis Hawks.

So here goes, from the top.

1. St. Louis Blues. They’ve qualified for the NHL playoffs 41 times and still haven’t touched a Stanley Cup. Curious thing about the Blues: When they were born in 1967, they blasted off like a rocket ship. In their first three years of existence, they were in the Stanley Cup finals every season. No other expansion team in any sport has ever done anything like that. A mirage, it turns out.

Tied at No. 2. Buffalo Sabres, Phoenix Suns and Minnesota Vikings, all with 29 playoff trips that went bust in the end. The Vikings get extra credit for losing four of the first 11 Super Bowls, scoring only 34 combined points to do it. The hockey Sabres are not to be confused with their city-mates, the Buffalo Bills, who have 14 aborted playoff runs, including the infamous four-peat as Super Bowl losers. No wonder that town is known for snow—and futility.

Tied at No. 5. The Vancouver Canucks and Utah Jazz are even at 27 ring-less playoff appearances. A little less Michael Jordan, and Utah would not be a member of the club. The Jazz were in their prime at the same time as Jordan’s Bulls. He won his last two championships against them.

At least the group of Pacer-killers through the years is distinguished. Michael Jordan, Patrick Ewing, Kobe Bryant, Shaquille O’Neal, LeBron James. So here the Pacers are, embedded at No. 7 on the list, just ahead of the Denver Nuggets, with their 24 playoffs without a title.

By the way, if college basketball were included, cheer, cheer for old Notre Dame. The Irish have accomplished the bittersweet feat of 36 NCAA Tournaments qualified for, and never one shining moment at the end. That’s the most. Purdue, at 30, is pretty high up there, too.

Now that we know the Pacers are on the list, how do they get off? Keep adding bodies, until they can gather the right collection. With the draft over, the free-agent market is now the focus, and that’s when things really get serious. Since the Pacers have announced they will have neither Good Lance nor Bad Lance next season, it would seem they’re freeing up cash from Lance Stephenson for a big move. A free-agent signing, or a trade, which aren’t much more reliable to predict than draft picks.

We’re reminded of that, with the approaching first anniversary of the Paul George/Victor Oladipo/Domantas Sabonis deal. The one where the Pacers were supposedly fleeced, by expert acclaim. Nobody ever really knows anything for sure, but in an uncertain world, Kevin Pritchard has earned a serving of public confidence, has he not?

This summer has already shown us two things for sure: The Pacers are not on LeBron James’ short list, and there is always room on the roster for another UCLA Bruin. Holiday will make four, if Darrin Collison, Leaf and Anigbogu are all back.

Meantime, Oladipo is the current orchestra leader in Bankers Life Fieldhouse, and the trend arrow seems to be going up. One day all the way up, perhaps. One day. Another new face or two is due soon, in the never-ending quest to leave the NCA.

It’s an odd club. A team can be No. 7 in seniority, and would rather be kicked out.•