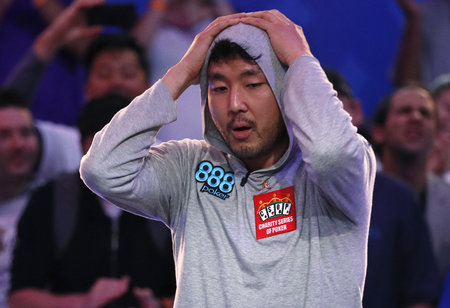 Indianapolis resident John Cynn told reporters early Sunday that the money will be "life-changing" but does not have immediate plans to spend it.

He grabbed his head and was visibly shocked when he defeated Florida resident Tony Miles after more than 10 hours of play just between them. He then hugged friends and his father.

Cynn, 33, had previously cashed in at various series tournaments and barely missed the main event's final table two years ago, when he finished in 11th place and won $650,000.

A visibly emotional Miles hugged many of his supporters after his defeat. He shed tears off stage.

Cynn won the famed tournament Sunday at the Rio All-Suite Hotel and Casino in Las Vegas. In addition to being $8.8 million richer, he is the owner of a coveted gold bracelet with diamonds and other gemstones.

Cynn eliminated Miles on the 442nd hand of the final table.

Cynn's king of clubs and jack of clubs were stronger than Miles' hand. Miles went all in with the queen of clubs and eight of hearts.