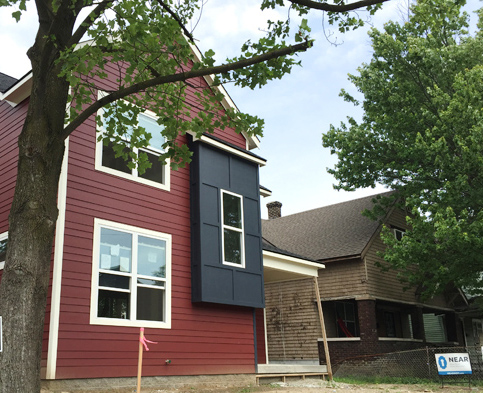 When Jack Hesser learned about a local not-for-profit’s efforts to retain and recruit teachers to Indianapolis through an affordable housing project, he saw an opportunity to buy a house in the neighborhood he serves.

“Knowing that I really wanted to buy a home in Indianapolis, I definitely wanted to be somewhere near my school and near my students,” said Hesser, a seventh-grade science teacher at Harshman Middle School. “The teachers’ village seemed like a really great opportunity.”

As soon as applications for the new housing initiative, Educators’ Village, were available, Hesser was at Near East Area Renewal’s office with his bank statements and pay stubs in hand. But, several months later, after not hearing back from the community development group, Hesser backed out.

“I wanted to move forward with purchasing a home and wasn’t getting a lot of communication back,” he said.

The aim of Educators’ Village was to provide affordable housing to teachers, who often make low salaries that prompt them to leave teaching, while revitalizing a neighborhood. But despite dozens of people applying to purchase the homes after NEAR and city officials broke ground last November, only one teacher has bought a house in the village.

At least 11 teachers, including Hesser, have pulled out of the process, either because construction has gone slower than expected or teachers found out they earn too much money to qualify for the homes. This has led some critics to wonder whether the Educators’ Village can live up to its promises.

“It’s kind of a missed opportunity in terms of the people that could’ve really utilized a program like this and could have benefitted from a program like this,” Hesser said. “Teachers so often are a big force in their communities.”

What is the Educators’ Village?

Keeping teachers in the state is a problem.

Indiana ranks among the lowest states for teacher recruitment and retention, according to a 2016 Learning Policy Institute study. Teachers cited the pressure around student performance on standardized tests, large class sizes, and starting salaries lower than the national average as reasons why they leave the profession.

The study found that teacher turnover is higher in cities than in suburban or rural districts in most regions. An average of 500 teachers leave Indianapolis Public Schools each year out of about 2,400 teachers, according to district spokeswoman Carrie Cline Black.

But the Educators’ Village is an effort to keep teachers in Indianapolis.

It was introduced in September 2017 as a partnership between Near East Area Renewal, the Indianapolis Neighborhood Housing Partnership, and the City of Indianapolis.

In his 2016 campaign for mayor, Indianapolis Mayor Joe Hogsett said he wanted to sell city-owned homes for little or no cost to teachers, in the hopes of enticing educators to stay and drawing new teachers to move to the city.

“On a lot of different levels, it checks boxes across the board,” Hogsett told Chalkbeat. “Number one, I believe that as a community, education is probably the single most important issue that will help Indianapolis get to the next level.”

Several cities nationwide have implemented their own variation of a teachers’ village. In Newark, New Jersey, teachers can rent an apartment in a $150 million, 400,000-square-foot complex, dubbed the “Teachers Village.”

John Franklin Hay, executive director of NEAR, worked with district and city leaders to identify a cluster of homes for the Educators’ Village close to schools on the near east side. That’s when they found several unoccupied homes and lots on North Rural Street where the neighborhood had a 70 percent vacancy rate.

“Instead of a teacher not being able to find housing in the urban core where they serve, teachers locate out to suburban areas and begin the daily commute of 25 minutes to 90 minutes a day,” Hay said. “The idea would be to develop a cluster of houses that would be much closer to the schools in the school district, but would also be a really cool place to live.”

The housing development is a two-block cluster of 22 new and restored bold-colored homes in the St. Clair Place neighborhood. Though marketed to teachers, the homes are set at below-market prices for anyone within a low- to middle-income cap.

When the village is complete, nine homes starting at $136,000 will be available to anyone at 80 percent of area median income or less. For example, a single-person household is capped at $43,250.

“That income range is really right within particularly starting teachers — first, second, third-year teachers,” Hay said. “In Indianapolis Public Schools right now, for instance, teachers start at about $40,000, and 80 percent of area median income currently is a little over $43,000 dollars [for one person].”

Finding educators for the village

Since the application became available last fall, 34 people have applied. But so far, only one person has purchased homes in the village. NEAR did not provide additional details about the buyer.

Of the 17 teachers who applied, three are in underwriting and one is awaiting the sale of an existing home. At least 11 teachers are no longer in the process — three purchased a home elsewhere, three were denied credit, four qualified for a home but backed out, and one was approved but couldn’t afford a house, according to Hay.

Hay is confident, however, that all the homes in the Educators’ Village will sell within 90 days of being listed. He said he’d like at least one-third of homebuyers to be teachers, but is happy to welcome others to the community.

Over the last two years, Hay said NEAR has invited the district and local charter schools to buy into the project. Hay said IPS said it could not provide funding, but would consider finding a way to incentivize teachers. After several conversations with district and charter school leaders, Hay said nothing materialized.

“We are still hopeful,” he said. “We think financial incentives from school leadership will send a great signal to teachers who want to serve in the urban core, where they are so needed.”

In response, district spokeswoman Carrie Cline Black said the Educators’ Village is an incentive in itself for teachers to stay connected to the local community.

“IPS values collaboration and welcomes a formal proposal to consider additional creative ways to recruit and retain talented teachers in our learning community,” Black told Chalkbeat in an email.

The district is also facing a $45 million budget deficit next school year, which may contribute to the lack of incentives.

Ronak Shah, a seventh grade science teacher at KIPP, thought the Educators’ Village would be the perfect place for him to create a space for teachers to gather and share stories and ideas.

“My goal in purchasing there was: Let me turn my garage into a space with a bar and have chalkboards and everything and invite teachers from anywhere in the city in and have social events there,” Shah told Chalkbeat.

From the beginning, Shah said he was very upfront with NEAR about the need for a garage. In an early conversation with the organization, he learned about an company NEAR partnered with that could build a garage for free with an apartment above.

“The way they framed it, it sounded like it was guaranteed this was a possibility,” Shah said.

But because the Educators’ Village is a government-funded project, Shah said the future buyer is limited to what specifications they can request. He said those limits started being enforced.

In April, he found out the garage would no longer be an option, but said Shah could build one himself. By the beginning of May, Shah reconsidered his interest and pulled out of the process on May 2.

“I ended up having to make a lot of caveats and it ended up not being what I really wanted anyways,” Shah said. “What I really want is the space for teachers to come together, and I couldn’t have that there, which is ironic because if I could have it anywhere it should be there.”

A sense of community

While only one educator has purchased a home in the village, the initiative is still enticing to a lot of people, even those who aren’t teachers. Kelsey Wolf drives past a house in the development nearly every day on her way to and from work.

“I am in the market for a house,” said Wolf, a social worker for HealthNet Healthy Families. “I work in the community. It’s great that they’re trying to revitalize it and bring people like me who work here and give them an opportunity to own something in the community we work in.”

After touring the home and others in the neighborhood at NEAR’s June 30 open house, the former school teacher wanted to apply as soon as she could.

Wolf took a look at her financial situation. She recently finished school and stepped into a new career, and said she isn’t in the financial state she would prefer. Wolf met with NEAR Tuesday to learn more about the village and what her options are.

Although she’s not a teacher anymore, Wolf stills works with families on the near east side. She said sharing a community with her families will strengthen the bond they share.

“It connects all of us. It makes all of our experiences shared,” Wolf said. “It gives us an opportunity to not only work together, but live amongst each other so we can really start to form a sense of community.”