Home » Indiana workers to get boost from Amazon minimum-wage hike 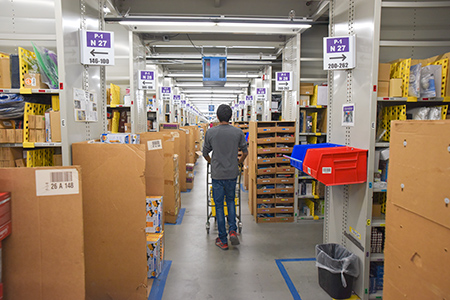 The jobs pay at least $15 an hour and are for delivery drivers and warehouse workers, who pack and ship online orders.

Thousands of Amazon workers in Indiana are in line for a pay hike, thanks to the Seattle company's announcement Tuesday that it will raise its minimum wage for all U.S. workers to $15 per hour starting next month.

Amazon ranks as the 16th-largest Indiana employer, with 8,500 full-time employees, according to IBJ research. And it might soon get a lot bigger. IBJ reported last month that Greenwood is a finalist for an $80 million Amazon distribution center that would employ 1,250 full-time workers.

The company operates seven fulfillment or sorting facilities in Indiana, plus a Prime Now hub. Amazon’s advertised wages for local fulfillment center positions have been in the range of $12.50 to $13.50 per hour. The company told Greenwood officials that the facility there would pay an average of $14.65 an hour, including administration and management personnel.

Amazon has more than 575,000 employees globally.

Pay for workers at Amazon can vary by location. The median pay for an Amazon employee last year was $28,446, according to government filings, which includes full-time, part-time and temporary workers.

Amazon said its public policy team will start pushing for an increase in the federal minimum wage of $7.25 per hour.

"We intend to advocate for a minimum wage increase that will have a profound impact on the lives of tens of millions of people and families across this country," Jay Carney, senior vice president of Amazon global corporate affairs, said in a statement.