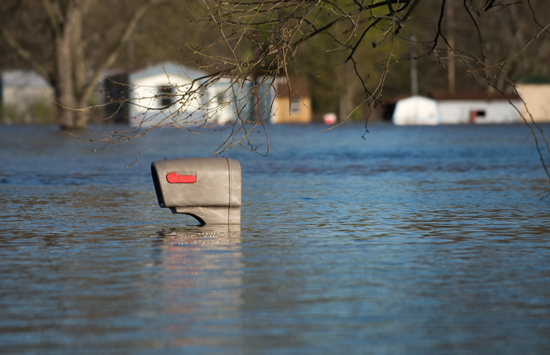 Indianapolis neighborhoods prone to flooding could soon see the creation of a funding vehicle similar to tax increment financing districts that would pay for levee work and maintenance.

The City-County Council’s Public Works Committee voted unanimously Thursday night to move a proposal forward that would establish a so-called “flood control improvement district” in the Warfleigh neighborhood, plus parts of Broad Ripple and near Butler University. Warfleigh is west of Broad Ripple and east of North Crow's Nest, along the White River.

The proposal, which still needs approval from the full council and the Metropolitan Development Commission, would allow the city to capture tax revenue generated from increases in assessed value growth and direct them into public works capital and maintenance projects for the area.

“It kind of is like a TIF,” said Emily Mack, director of the department of Metropolitan Development.

In the case of the proposed Warfleigh district, the new tax increment funds generated would essentially go to pay back the city for the $20 million it has spent so far from its stormwater fund to build a series of new levees and flood infrastructure projects in that area that are expected to be completed next spring.

The project has been ongoing since 2000, when the city of Indianapolis entered an agreement with the U.S. Army Corps of Engineers to build the flood walls and earthen levees to protect against flooding, which devastated the area in 1991 and in 1964.

After the construction is done, FEMA could make the determination that residents there would no longer be located in a flood plain, eliminating their need to carry costly flood insurance. That could drive up the values of homes in the area.

The plan tentatively approved Thursday night is being timed with that in mind.

“We want to have all the boxes checked” for when that happens, Department of Public Works Director Dan Parker said.

The fund would capture new tax revenue generated by those increases in assessed value.

“I see the path to enormous increases in assessed values simply by the virtue of not being in a flood plain,” said council Vice President Zach Adamson. “We’re not just talking about increment on AV on new development, but increased AV for the whole district.”

Parker said it has been “incredibly difficult” to improve properties in the flood plain when residents “have the added burden of having to pay for flood insurance.”

“Our bet related to this idea is when people come out of the flood plain, they’ll improve their property, and the value of the homes will go up,” Parker said.

But Adamson warned that “there will be a tradeoff” when flood plain status is removed, because homeowners will have to pay higher property taxes as their assessed value goes up.

However, Parker said that is because the home values in Warfleigh are currently depressed from what they should be because of the flood plain designation.

One resident came to the meeting to speak against the proposal. Jack Esselman said his home value in that area is already going up, so he is concerned about taxes skyrocketing.

“I happened to get my new assessment before the Army Corps says everything is wonderful,” he said. “It went up 16 percent. The long and short of it is that’s what’s going to happen.”

The proposal comes after the city was given the ability to create such financing districts in the 2018 state legislative session. Parker said the city is looking at pursuing the idea in other areas of the city, including in Rocky Ripple and in Mars Hill.

Parker said the idea was a creative way of trying to generate extra revenue for the city’s intense drainage needs. Right now, the “lion’s share” is being dedicated to levies in small areas of the city, such as Warfleigh, he said.

The districts could allow the city’s overall stormwater fund to take care of general needs across Marion County, he said. In 2017, Parker said the city received more than 1,200 calls related to flooding or stormwater capital needs.

The committee on Thursday night also unanimously approved the issuance of $50 million in bonds that would pay for additional stormwater projects.

The stormwater management district serves about 300,000 customers, Parker said. The city has spent $112 million in stormwater infrastructure in the past five years.