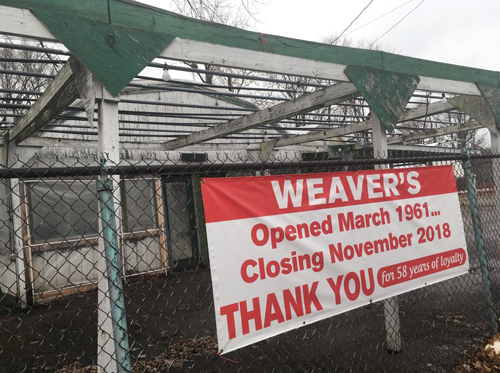 The closure of a long-standing Broad Ripple business is raising questions about the future of the property, particularly as a new apartment building is constructed next door.

Owner Tom Weaver told IBJ that a combination of factors—including the development of the nearby apartments and a loss of parking places for the business—led him to close the shop.

“The area is a bit different now than it used to be when we first got in here,” said Weaver, who has run the business on his own for the past nine years, following the death of his mother.

His parents, Mary and John, started the business in 1961.

Weaver's had long been a go-to location this time of year for those looking to buy fresh Christmas trees.

Longtime local real estate broker Bryan Chandler, who owns the nursery property, said he is exploring his options for the nearly 1.2-acre parcel. He said there is no timeline for finding a new use for the land, which he bought from the Weavers in 2013 for about $160,000.

Weaver's was permitted to keep using the property for a rental fee after the sale with the understanding that the parcel could someday be redeveloped.

The Ripple, an apartment building being developed to the west of the property, is expected to open in 2019. The building will have about 30 apartment units and 7,000 square feet of retail space.

Earlier this year, start of construction at the apartment site led to the loss of about two dozen parking places that Weaver leased for his shop, leaving the business with just six available spaces.

He said the loss of those spots hurt business and were ultimately responsible for his decision to call it quits.

“It was just an extremely difficult situation,” he said. “Losing that many parking spaces isn’t something many businesses like mine are equipped to deal with.”

Weaver said he had an agreement with the previous owner of the apartment property to provide access to running water and bathrooms. That ended when the old building on the property was demolished to make way for the apartments. Weaver's used water from White River to hydrate the plants, but found it difficult to get by without a bathroom for employees.

Chandler, president of Eclipse Real Estate, said running water won't be a problem at the property in the future because new water and sewage lines are being installed in the area as part of apartment project.

The buildings in which Weaver's was located—including the greenhouses—will remain on the property until decisions are made about the future of the parcel, Chandler said.

One idea that’s been proposed for the property in past years is turning it into a green space.

Weaver noted a stretch of land between the new apartments and the river is owned by the Indianapolis Parks Department. The area has long been suggested as an idyllic location for a new walking trail and connector to Broad Ripple Park. He said the idea of a green space along that trail would be a sensible move.

The proposed trail would start at 6311 Westfield Blvd., the site of the new six-story apartment building River House Broad Ripple. It would follow the river east, past the Monon Trail and behind the Ripple project, ending at the park.

“I think something like that could work nicely there,” Weaver said. “But I’m not the one making those decisions.”

Chandler said the trail idea is on the list of potential uses for the area, adding he has been in discussions with area groups involved in river development about the possibility. But he noted that proposal isn’t set in stone.

Weaver, for his part, said he felt like his business was being made less viable by the type of development in the area.