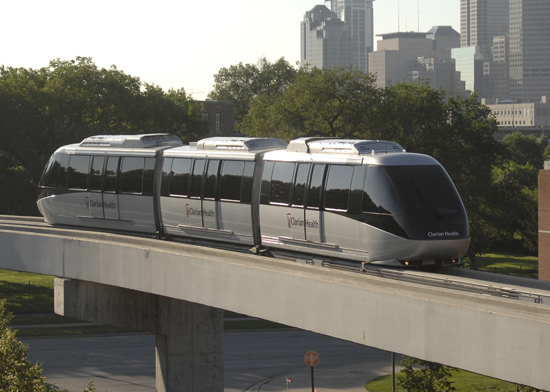 Indiana University Health is putting the brakes on its People Mover elevated train.

The health system said Wednesday it will stop train service in February for cost and maintenance reasons, and switch over to expanded bus shuttles to move people around its downtown campus.

IU Health called the train shutdown a “suspension,” but did not say if or when it would reopen. A spokesman said that IU Health wants to keep its “options open.” The tracks—which include a pneumatic tube and cables—will remain in place.

If the People Mover closes for good, that would mark the end of a system that opened just 15 years ago on 30-foot-high tracks to connect Methodist Hospital with University Hospital and Riley Hospital for Children, about 1.4 miles away.

The switchover comes as IU Health is preparing a huge overhaul of its downtown campus, expected to cost about $1 billion. The project, announced three years ago, calls for closing University Hospital and consolidating clinical operations into expanded facilities at Methodist and Riley Hospital for Children. IU Health has not yet unveiled a master design for the campus overhaul.

The train system, built at a cost of $44 million, is due for major maintenance, requiring a “significant capital investment,” IU Health said in a written statement. By switching over to a bus shuttle service, the health system said it expects to save about $40 million over the next 10 years.

The train system was launched in 2003 and has carried more than 6 million riders, according to the IU Health website. It does not operate during high winds or other rough weather.

The health system said it will launch the expanded bus shuttles in February. The bus service will be free, with multiple shuttles running each day, depending on demand. The shuttle stops will include Methodist, University and Riley hospitals; Simon Family Tower; the pathology lab; and Fairbanks Hall, the system’s headquarters, located at the top of the Central Canal.

“We’re confident the improved shuttle system will provide a safe, reliable and convenient way to link our downtown hospitals while at the same time be an economical mode of transport, enabling IU Health to invest the savings in our people and patient care,” said Dr. Ryan Nagy, president of IU Health Methodist and University hospitals.