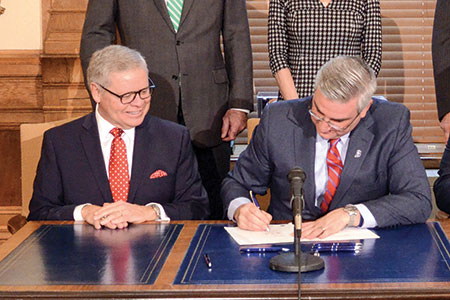 After years of unsuccessful attempts to repeal a Prohibition-era ban on retail Sunday alcohol sales in Indiana, the measure finally had enough support.

Gov. Eric Holcomb signed the bill in late February and the law went into effect immediately, rather than being delayed until July 1 like most legislation.

The law allows stores to sell carryout alcohol on Sundays from noon to 8 p.m.

However, lawmakers did not approve a proposal to allow grocery stores and convenience stores to sell cold beer.

Other legislative news in 2018 included:

◗ Lawmakers agreed to exempt software-as-a-service—or software operated from the cloud and billed periodically—from Indiana’s 7 percent sales tax. That was a big priority for the tech community. Doing so made Indiana the fourth state to pass such a law, although many states exempt cloud-based software sales through rules.

◗ Lawmakers passed a bill that requires public schools to offer computer science classes as an elective in high schools, as well as a part of the science curriculum for all K-12 students, by 2021. The law also established a grant program to help pay for teacher training in computer science.

◗ CBD oil—a low-THC hemp extract—became legal in the state after a bill that allowed the possession, use and retail sale of the substance passed the Legislature. Supporters say the oil helps relieve various health problems.

◗ A hate-crimes bill failed to gain enough support to pass, which kept Indiana as one of five states without such a law. Republican leaders said they couldn’t come to a consensus on the issue, as wording that would have protected transgender individuals became a sticking point. The measure could have more momentum going into 2019, as Holcomb has come out in support of such a law and is making it a priority for next year. Still, lawmakers will likely debate over the specific language.•