Nearly 65 years after introducing the NFL’s first pep squad, the Indianapolis Colts are making several changes to their cheerleading program amid the backdrop of the #MeToo movement.

The team this week announced its "Next Chapter" initiative for cheerleaders, which includes a more modest uniform (see photo), a new educational and professional development program, and an increase in community-service experiences.

The program, which will debut in the 2019 season, is intended to showcase "the athleticism, talent and character of the athlete-performers," the team said.

Kelly Tilley, director of cheerleaders for the Colts, said the point of the changes is for fans to look at professional cheerleading “through a different lens” and to drop stereotypes.

“It goes beyond [uniforms], just in terms of being able to tell the cheerleaders’ stories in a new way and breaking down some of those traditional stereotypes that have been developed,” she said.

NFL teams have come under fire in recent years for the way they treat their cheerleaders. Some of the country's largest media outlets have called for major reforms or the outright end to NFL cheerleader squads, which are used by 26 of the league's 32 teams.

Several teams have been sued by their cheerleaders in recent years over issues including unfair pay, mistreatment, discrimination and sexual harassment. Teams including the Tampa Bay Buccaneers, the New York Jets, Los Angeles Raiders, Cincinnati Bengals and the Buffalo Bills have settled such suits, and others are still facing them. The Colts are not among those teams.

While Tilley did not directly speak to what impact the #MeToo movement—or legal follies of other NFL cheer squads—had on the Colts’ decision to make changes, she said discussions with past cheerleaders did play a role.

“We think now is a good time to look to the future and what we can do to make the cheer program the best it can be, especially for future generations of cheerleaders and fans,” Tilley said. 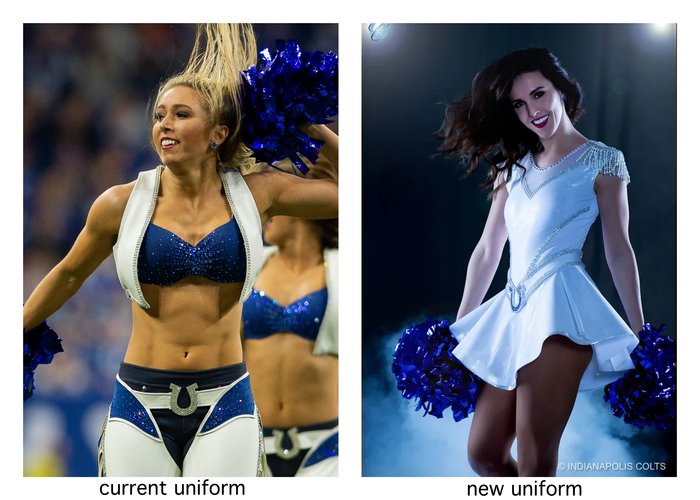 The Colts cheerleaders’ new uniforms will have a more conservative and athletic look, with less emphasis on pushed-up cleavage and bare midriffs than the current attire. The new ensemble, which is mostly white, has a low collar covered in translucent material, as well as a high-cut skirt and boots that rise to the mid-calf.

The introduction of the Next Chapter initiative came Sunday during the Colts' final regular-season home game of the season, the fourth quarter of which was spent by cheerleaders performing in their professional work attire.

The initiative's programming changes for next season include an educational and professional development program, in which cheerleaders will sit down with members of the Colts organization each year to map out career goals for them to work toward throughout the season.

Cheerleaders will receive a stipend for each goal they achieve—in addition to their regular pay for working games, community events and practices.

Most of the Colts' 26 cheerleaders this season have a paid career outside of cheerleading, while some are stay-at-home mothers and others are students.

The cheerleading squad’s community-outreach efforts will be boosted with more opportunities for members to work with not-for-profits and help raise funds for organizations of their choosing.

This year, cheerleaders worked with local not-for-profits to compete for a $10,000 grant—something that’s expected to continue in coming years, Tilley said. The grant will be funded by the Colts Foundation.

The changes for the program come as the club seeks to focus more on their cheerleaders’ off-the-field accomplishments and highlight members as role models for young women, Tilley said. The initiative also includes an expanded Junior Cheer program, and the introduction of a program for preschool-age girls.

The changes, Tilley said, came from discussions with current and former squad members and front-office personnel related to the planning of events celebrating the Colts’ 35th season in Indianapolis. Until 1983, the team was located in Baltimore, where it became the first professional football team with cheerleaders in 1954.

The Colts declined to share how much of a financial investment is being made in the program, with a spokesman noting the team’s policy is not to discuss financial details of employee programs. The team also declined to disclose how much money members of the cheer squad make.

Various media reports and numerous lawsuits say most NFL cheerleaders receive far less than minimum wage when considering all the required time that goes into position.

The Colts aren’t the only NFL team to do some soul-searching of late when it comes to cheerleaders. The Los Angeles Rams and New Orleans Saints this year added male cheerleaders to their squads, becoming the first teams in the league to do so. And the Washington Redskins made uniform and programming changes after some cheerleaders alleged they were sexually exploited at private photo-shoot trips.