Fishers is known for its tech sector, Carmel for its large corporate headquarters, and Westfield is gaining recognition for its youth sports and related tourism sector.

As Bastian Solutions, a Carmel-based subsidiary of Japan-based Toyota Industries Corp., prepares to open its Westfield facility along U.S. 31, city leaders are working to woo other companies like it.

Bastian is the first tenant at NorthPoint Commerce Park, where the park’s lead developers and city officials hope to create a hub of advanced manufacturers.

They say easy access to U.S. 31 and other major highways and interstates—coupled with a lack of available acreage for such projects in the much-sought-after county—makes the park’s open 300 acres of land desirable. And, they say, the quality of life Westfield has established makes the city attractive to corporate leaders looking to expand or build in the suburbs.

“Obviously, advanced manufacturing is predicated on tech—and that marketplace, that work environment—is perhaps the fastest-growing sector, and will be,” Westfield Chief of Staff Todd Burtron told IBJ. “We’ve built the last decade a local economy on travel-youth sports, which many economists will argue has recession-proof qualities. The next level is advanced manufacturing.”

In the past year, the city has talked with several advanced manufacturers about building in Westfield, Burtron said, and it’s investing in infrastructure to help speed up development in NorthPoint.

Chris Wilkes, senior vice president of South Bend-based Holladay Properties, the developer behind NorthPoint, said at least two advanced manufacturers are eyeing a combined 90 acres in the commerce park. He expects he’ll be able to share the name of at least one of them in 30 to 60 days.

Site selection experts say there’s no doubt advanced manufacturing companies will consider Westfield now that Bastian Solutions is opening there, but city officials need to be prepared to compete with nearby communities, including next-door Noblesville, and others across the Midwest.

The largely undeveloped land that makes up NorthPoint today was first tagged for industrial development in 2006, before the economic downturn. The mixed-use real estate development was revived in 2017 and now encompasses 430 acres, including 80 reserved for single-family housing.

Bastian Solutions announced in October 2017 it would be the first tenant in the commerce park, agreeing to construct a 79,000-square-foot building that could eventually be expanded to 115,000 square feet.

The building’s first phase is complete, and manufacturing is in full production, said Stefanie Hardy, Bastian Solutions marketing manager. Office and engineering staff are expected to begin using the building this month, and a grand opening is slated for mid-April.

The facility, which has hired about 60 people with plans to add at least 30 more in the next two years, will house Bastian Solutions’ ZiPline Conveyor manufacturing as well as production of the company’s system-control panels and power components. Additional advanced manufacturing opportunities will be considered in the future, Hardy said. 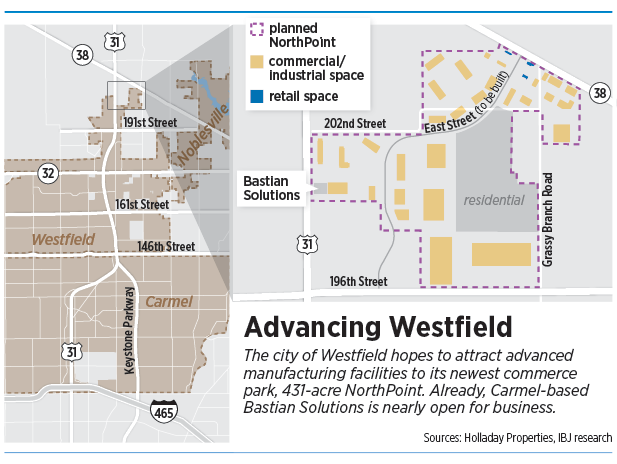 Bastian chose Westfield for its newest manufacturing facility for two reasons, Hardy said: its proximity to Indianapolis and key highways, and its reputation. The city has a strong school system and “state-of-the-art amenities, such as Grand Park [Sports Campus],” she said.

Wilkes said that, before NorthPoint, Hamilton County had a gap, specifically along U.S. 31, for sites that could accommodate projects like Bastian’s.

“If you’re a 3,500-square-foot office user, there’s plenty of options in that U.S. 31 corridor, specifically in Carmel,” he said. “If you’re someone who has a manufacturing or engineering component, there’s just not a lot of land available.”

Those types of projects need at least 12 to 14 acres, and much of U.S. 31 in Hamilton County is zoned for vertical footprints, rather than horizontal, Wilkes said.

“There’s not a lot of real estate options … in Hamilton County, let alone that U.S. 31 corridor,” he said. NorthPoint “is in a good market; it’s a good site. We think we’re really well positioned to chase after that advanced manufacturing.”

Wilkes said one of the two companies looking at NorthPoint is interested in 60 acres; the other wants 25 to 30 acres. The companies would employ a highly educated, highly skilled workforce, he said.

Tim Monger, senior vice president of incentives and location services for Indianapolis-based Resource Commercial Real Estate and the former president and CEO for Hamilton County Economic Development Corp., agreed it can be challenging to find industrial and manufacturing space in Hamilton County, especially in Fishers and Carmel. NorthPoint—along with sites in Noblesville, which has seen success attracting companies like Michigan-based BorgWarner and SMC Corporation of America—will fill a need, he said.

Once Bastian Solutions is fully up and running, Monger predicted, even more companies will begin considering Westfield and the city will need to be prepared to approve incentives to stay competitive.

“They need to be prepared to be able to understand the workforce and what that location would allow a company to attract in terms of workforce and talent,” he said. “[Bastian Solutions] is really going to change the face of that area of U.S. 31.”

While Westfield is investing in infrastructure to spur development in NorthPoint, it’s also providing incentives to advanced manufacturers considering locations elsewhere in the city.

In December, the Westfield City Council approved an incentive package for Indianapolis-based 3rd Dimension Industrial 3D Printing, which is investing $10 million to move from Zionsville Road in Indianapolis to a 27,000-square-foot speculative building in the Westfield Business Park.

The move will enable the company, which produces custom-made parts for aerospace and defense clients, to hire an additional 15 employees by 2021, who will earn an average wage of $28 per hour.

In November, Burtron and Westfield Mayor Andy Cook visited the Consulate-General of Japan in Chicago—which works to foster closer economic cooperation between Japan and Midwestern states, including Indiana—to talk about Japanese companies’ moving to Westfield.

More than 280 Japanese companies have operations in Indiana, employing more than 58,000 Hoosiers, according to 2017 data from the Indiana Economic Development Corp. Westfield wants to capitalize on the strong relationship the state already has with the country, Burtron said.

“We’re taking an active stance in fostering those relationships,” he said, “and doing our best to attract that investment here.”•